Deacon & Co. at 6 Cripplegate Buildings and the White Horse Inn at number 10 in the same street had a close link. The Deacons ran their carrier service from the yard behind the inn. As the elevation above shows, the entrance to the yard was below the neighbouring property at number 7. Cripplegate Buildings used to be called Cripplegate Street and was straddled by Cripplegate, the gate in the City Wall. The gate itself was demolished in 1760, but remains were still visible in the entrance to the inn yard, which used to be under the gate. The inn itself was just outside the gate and is already mentioned as the address for carriers in the 1637 Carriers Cosmographie. According to J.J. Baddeley’s Cripplegate, one of the Twenty-six Wards of the City of London (1922), the yard “ran along nearly the whole length of the north side of the City Wall (which was then standing), from Aldermanbury Postern to the site of the old gate, and had a considerable depth. It had a private entrance into Fore Street”. See for a picture of the gate and Horwood’s 1799 map of the area the post on number 1 (here). In 1770, William Deacon took over as carrier and the Deacon family ran the business till the 1840s.

The inn itself was listed for Elizabeth George at the time Tallis came round for his Street Views, but Daniel Deacon is frequently mentioned as an innholder, so he may have held the licence with others taking care of the day-to-day running of the inn. In 1830, for instance, he testified at the Old Bailey in a case of theft that he is “a carrier, and have two partners. I keep the White Horse Inn, Cripplegate”.(1) In that same case, John Scholes says that he is “clerk to Messrs Deacon and others”, so various carriers seem to have shared the administrative work and costs. 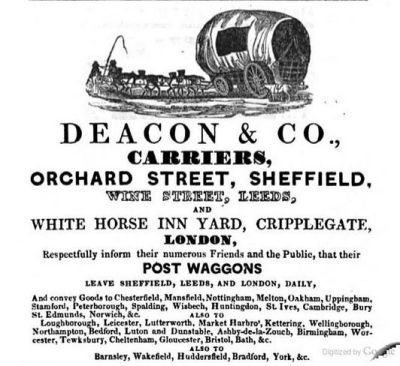 advertisement in the 1837 History, Gazetteer, and Directory, of the West-Riding of Yorkshire

Scholes did rather well for himself as the 1848, 1851 and 1856 Post Office Directories list him as the proprietor of the business. He probably took over in 1845 or 1846 as the 1846 tax records still have Deacon at number 6, but Scholes’s name appears in 1847. Tax lists were usually slightly behind reality, so 1846 is a reasonable guess for the take over. By then, Deacon had already added number 7 to his business, as the two properties are bracketed together for him in the tax records. According to Baddeley, Deacon had carried goods all over the country, but with the advance of the railways, Scholes had to be content with the transport within London itself. That was not quite true as we shall see.

Two horses and a wagon from A new book of horses and carriages | The Rhedarium, c. 1784 (© The Trustees of the British Museum)

The 1861 census calls the White Horse Inn yard ‘Scholes Yard’ and lists Eliza Ann Scholes, head, as railway agent. John had died in 1859 and had left her the sole executrix of his estate.(3) In Mathew’s Directory of 1863, one Everard, carrier of Bristol and Bath, explicitly states that he forwards “goods and luggage daily by railway to all parts of the Kingdom; in connection with Mr. John Scholes, White Horse, Cripplegate, London Wall”. So, Scholes did not give up on the carriage outside London as Baddeley would have it; he just used the railways rather than horses and carts.

Baddeley says that Scholes lived in the house that had been Deacon’s in the yard and that they ceased trading in 1884. Not really, but the property in Cripplegate Buildings had to be vacated in 1878 and the tax records for 1879 clearly state that the houses numbered 6 to 10 had been pulled down and in 1880 they are given as “rebuilt”. After that, they were just listed as ‘warehouses’, so it is unlikely that the Scholes’ firm still used 6 Cripplegate Buildings, although they may of course have continued trading from the yard. When the 1881 census was taken, Eliza Ann was living at 228 Hoxton Street with three of her children. Her occupation is given as ‘carman’, but somebody did not believe that could be the occupation of a widow and ‘corrected’ it to ‘charwoman’. She died in December 1890 and her probate record still gives her as of 228 Hoxton Street, but also of Whitecross Street.(4)

The Whitecross address in Eliza Ann’s probate record tells us where the firm went after the Cripplegate Buildings were demolished. They certainly did not cease trading as Baddeley would have it and the 1902 Post Office Directory lists them as “Scholes John Lim. carmen, 5 Whitecross Street E.C.; Pavilion Yard 187 Whitechapel Road E & 228 Hoxton Street N”. Hughes’ Business Directory of 1921 has them as “Scholes John Lim 4 Whitecross St EC 1, & 75 Royal Mint st & 92A Cannon st rd E”. They can no longer be found in the 1934 Post Office Directory and the Whitecross address had then been taken over by Pope & Sons, cartage contractors. The London Gazette of 17 July, 1922, published a notice about a meeting of shareholders of John Scholes Ltd, instigated by the Chancery Division of the High Court, which did not bode well and, although I did not find definite proof, I think the firm was liquidated sometime after that. And that was the end of the carriers from Cripplegate Buidings.