Cripplegate Buildings is now the top part of Wood Street and changed beyond recognition. For its history, see the post on Richard Finden who lived at number 1 Cripplegate Buildings when the Tallis Street View was published.
An advertisement in Jackson’s Oxford Journal of 16 August, 1800, about the sale of an estate and dwelling house in Bampton, Oxfordshire, lists Mr. Bristow, druggist, at no. 4, Cripplegate Buildings, London, as one of the addresses where particulars could be obtained. Thomas Ferniough Bristow had links to Oxfordshire and is mentioned in several leases now held at the Oxfordshire History Centre, concerning the Bradwell Grove Estate.

Thomas died in 1826(1) and the next occupants of 4 Cripplegate Buildings were Messrs. Evans and Lescher, who styled themselves “wholesale druggists” in an advertisement in The Times of 30 December, 1830. In The Perfumery and Essential Oil Record of 1913, it it said that Joseph Sidney Lescher married Sarah Harwood, a niece of Thomas Bickerton Evans, so the gentlemen were not just business partners, but became related by marriage.(2) In July 1839, that is around the time of the Street View publication, a notice in The London Gazette mentions John Evans and Thomas Bickerton Evans of Liverpool, wholesale druggists, as the main creditors of a druggist in Llangefin, Anglesey, who has assigned his assets over to them because of impending bankruptcy proceedings. The development of the port of Liverpool had opened up more markets and the Evanses were keen to take advantage of that opportunity.

In 1842, the London Thomas Bickerton takes on as his apprentice Worthington Evans, son of John Evans of Bartholomew Close, also a wholesale druggist. Not sure whether Worthington was Thomas B.’s brother or nephew. To complicate things even more, a partnership is dissolved in April 1843 between John Evans, Joseph Sidney Lescher and Richard Hawley Evans, wholesale druggists of 60 Bartholomew Close.(3) No mention of Cripplegate Building. A year later, a partnership is dissolved between Thomas Evans and Richard B. Colley, who were first at 6 Silver Street and subsequently at 4 Cripplegate Buildings. Can you still follow the story? I cannot, because I am not sure of the exact family relationship between all these Evanses, but that they are related is certain. We know that Thomas Bickerton was the son of John Evans, but whether all the Johns mentioned above are one and the same is debatable as there were more than one in the druggist business. The 1851 census gives us (Thomas) Bickerton Evans at 13 Parliament Street as a wholesale druggist, and Joseph Sidney Lescher at 17 Church Row, Hampstead, also a wholesale druggist.

There was no family feud going on despite all these changes, it was just decided to split the Liverpool and London branches with Lescher to concentrate on the London side of things. In 1856, the son of J.S. Lescher, Frank Harwood Lescher, becomes T.B. Evans’ apprentice. On the indenture paper, Lescher is given the address of 60 Bartholomew Close, which must have been the main London address for the firm. At the time of the 1861 census, both Lescher and Evans are still given as wholesale druggists, although they have both moved to a different address.(4) The Evans family remained in the drug trade and an obituary for Edward Evans, one of the sons of John Evans (the one who dissolved his partnership with Lescher in 1843), appeared in The Chemist and Druggist of 1905. In 1916, another obituary, in the same magazine, for John James Evans, the eldest son of Edward, states that in 1902, the two branches in London and Liverpool were united again as Evans Sons Lescher & Webb Ltd. The firm also had branches in Canada and the US and more mergers were to follow. 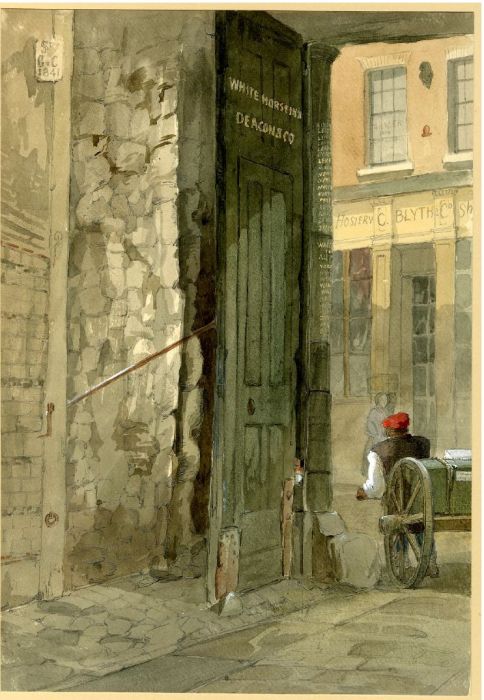 And what became of 4 Cripplegate Buildings? That question is not so easy to answer as sources frequently fail to give a house number and describe an occupant as just “of Cripplegate buildings”, but in 1843 and 1844 the combination Thomas Evans and Richard Bowen Colley could be found at no. 4. In 1843 they are given as the proprietors of a patent concerning a parasol.(5) This does not seem to have anything to do with the druggist business and perhaps the name Evans is just a coincidence. A year later, the partnership between these two umbrella makers is dissolved (see here for a possible later career of Evans) and we have to wait for 1858 to find evidence that William Thorne occupied the building, although the address is given as no. 4a. He was a draper and artificial flower maker, lately of Houndsditch, who unfortunately went bankrupt.(6) Next comes Robert James Blyth who, in 1862, gave his address as 4 Cripplegate Buildings in a notice regarding the estate of one Anna Maria Blyth. You can see the name Blyth on the building in the picture above. The carrier Deacon of the White Horse Inn yard whose name you can see on the green door has been given a blog post of his own.

In 1866, John Knight and Robert Sealby registered a couple of lace designs(7) from 4a Cripplegate Buildings and in 1867 they dissolve their partnership.(8) Perhaps they just had part of the, rather substantial, building, just as William Thorne probably had, as in 1867, we also find Robert James Blyth, Charles George Blyth and one William Nicholes dissolving their partnership as wholesale clothiers at no. 4. The C. for Charles would match the name on the front of the building in the drawing by Archer. 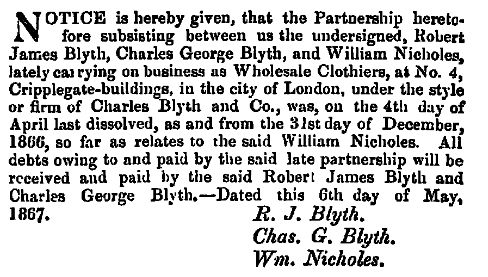 As we saw in the post for no. 1, the 1881 census says, “Warehouses recently built. 5 warehouses built on the site of 11 houses Forestreet and Cripplegate Buildings”. Number 3 was amalgamated with number 4 and occupied at the time of the 1881 census by Charles Shepherd, a foreman porter, and in 1891 by Stephen Hunt as caretaker. In the long run, that is after WW2, the eastern side of the Barbican was built on the site of nos. 1-4 and nothing is now left of the original Cripplegate Buildings (see for a picture no. 1).