The houses in Lamb’s Conduit Street have been renumbered in the 1860s and what was number 42 is now 83 Lamb’s Conduit Street, a property with a Grade II listing (see here). It sits snugly between two far more modern buildings, but looks more or less the same as it did when Sampson Low had his business there, despite the new shopfront that the listing text dates to the 20th century – you could have fooled me. The interior still retains some 18th-century features, such as the staircase and some panelling. 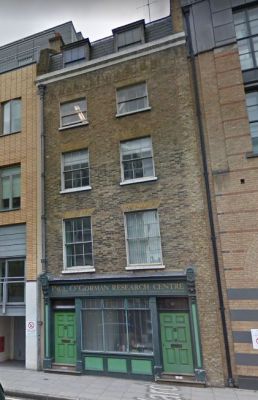 Before we get on to Sampson Low, the bookseller who had his shop at 42 Lamb’s Conduit Street, first something about his father:
On 3 September, 1782, Sampson Low, son of David, perukemaker from Ireland, was apprenticed to Jessintour (also Jessington) Rozea. This Rozea had his business at 91 Wardour Street and seems to have retired in 1786 or thereabouts as in that year J. Denew and A. Grant take over the printing business in Wardour Street. Apprentice Sampson Low is officially turned over to another master, Webster Gillman, on 3 February 1789. He must have been made free of the Stationers’ Company soon after that, probably after the required term of seven years, but he did not take up the freedom of the City until 7 October 1794, that is, more than two years after he started working for himself. The earliest evidence for him having his own business is an advertisement in The World of 24 December 1791 and the fact that in March 1792 he paid the duty for having an apprentice himself. He was then listed as letter press printer at Great Portland Street, which was outside the actual City and he had therefore no need to become a freeman of the City. 1792 is also the first year in which he is mentioned in the tax records for Great Portland Street. His earliest dated publications are from 1793: The Book of Common Prayer and A Catalogue of the Genuine Collection of Antient and Modern Coins & Medals. The latter publication did not mention Low on the title-page, but unobtrusively at the top of page 3.

In 1794, Low married Mary Ann Sheldrick from Dartford, Kent, and his son Sampson was born in 1797. To distinguish the two Sampsons, the father will henceforth be mentioned as Sampson (I) and the son as Sampson (II). Sampson (I) died in late 1800 or early 1801 and was buried on 5 January 1801 at St. James, Piccadilly. He had been trading since 1796 from Berwick Street, Soho. His business was probably sold by the executors, at least, it is no longer mentioned in advertisements or directories, but when his son grew up, he had the same bookish interest and was for a time apprenticed to Lionel Booth who ran a circulating library in Duke Street, Portland Place, and who also maintained the Register of Pamphlets and Newspapers at the Stamp Office. After Booth’s death in 1815, his son, also Lionel, continued the library. Sampson (II) worked for a time at Messrs. Longman, but in 1819, he set up his own bookshop in Lamb’s Conduit Street. According to his later partner Marston, his mother, who had remarried in 1802 to William Brough, kept house for him in the early years. In 1821, Sampson (II) married Mary Stent, but his mother continued to visit the bookshop and library frequently.

trade card (© The Trustees of the British Museum)

Early advertisements for Sampson (II) suggest that in the early years he just sold and published books, but on 27 June 1822, he entered an advertisement in The Morning Chronicle announcing that he had “that day opened a commodious room, built expressly for the purpose, which will be regularly supplied with the morning and evening newspapers [… etc.] Cards of terms may be had on application”. One such card is probably the one shown above with the various subscription options.

Low remained at Lamb’s Conduit Street till 1849, when he gave up the reading room and library and established himself at the corner of Red Lion Court and Fleet Street, only to remove a few years later, in 1852, to 47 Ludgate Hill. But that was not the end of the moves as the viaduct for the London, Chatham and Dover Railway Company was built right across the houses in Ludgate Hill and Low, by then in partnership with Edward Marston, moved to 14, Ludgate Hill. The firm moved again, in 1867 to 188 Fleet Street, and in 1887 to St Dunstan’s House, Fetter Lane. The business dealt with many authors who are now household names, such as Wilkie Collins and Mrs Gaskell. More on Low’s publications and Marston’s dealing with these and many other authors can be read in the latter’s biographical After work; fragments from the workshop of an old publisher (1904; online here).

Sampson (II) Low from Marston’s After Work via Wikimedia

Low retired in 1875 and died at his home in Mecklenburgh Square in April 1886. He had outlived his wife and his three sons, Sampson junior, William and Walter. His estate was valued at over £24,000, which seems modest for a successful publisher, but, as Marston said, “he was not the man to accumulate a large fortune in trade; his zeal and energy took a less selfish and more philanthropic turn”. Low had used his energy into establishing a fire service and worked as a Sunday school teacher. His partner Edward Marston was one of the executors of the will. The profitable business continued for may years with various other partners until the 1950s when it became part of the British Printing Corporation. Unfortunately, Robert Maxwell got his hands on it in 1981 and the long-standing firm was stripped of its assets and wound up after Maxwell’s death and subsequent bankruptcy. But, history repeats itself in a way, and where there was a gap between the working years of Sampson (I) and Sampson (II), there was also a gap between the termination of the business and the rebirth in 1997, when a descendant brought the name Sampson Low back to life as a new publishing company (see here). Sampson (I) and (II) would have been proud. 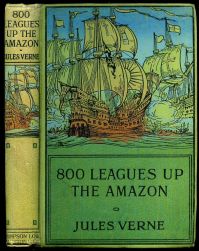