The Tallis Street View just gives the first initial letter of Alnutt’s first name, an H., so it was a bit of a struggle to find out who exactly Alnutt (also Allnutt) was. The first mention I came across was in the Post Office Directory of 1808 for one W. Allnutt, “turner and mat-layer to his Majesty” at 188 Piccadilly. The discrepancy in house number (188 in stead of 186) could very well be due to a change in numbering – a frequent occurrence in 19th-century London – but the initial suggested another family member. An 1825 advertisement for “imperial standard strike and heap measures” in the Chester Chronicle (9 December 1825) gave the name as Allnutt and Son, so presumably W. was the father and H. was the son. An 1831 advertisement in the Morning Post of 31 April for Mason’s liquid for cleaning kid gloves, lists Allnutt as one of the addresses the stuff could be obtained from, but that is even less helpful, as no initial or first name was given.

But, in 1832, Alnutt’s shop window was broken and three boot-hooks were stolen by one John Phillips and during the court case at the Old Bailey the following information was given by Thomas Smart, Alnutt’s foreman:

the dwelling-house is Mr. Allnutt’s; the property belongs to William Allnutt and his son, who is his partner – the house belongs to the father; I do not know whether the rent is paid by the firm – the father sometimes lives at Hammersmith, and sometimes in town; the son’s name is Henry; the father and his family sleep at Hammersmith – the son is married; his wife and family live in the house.(1)

So there we are, father William and son Henry are in partnership, or at least they were from (before?) 1825 to 1832 (or perhaps later). The 1841 Post Office Directory just lists Henry, so presumably father William had retired by then.

William Allnutt was listed in the 1851 census as a 90-year old retired turner who resided at Paddenswick Green, Farm Lane, Hammersmith. He lived to 1856 and in his rather lengthy will he is described as late of Stamford Brook, Chiswick, but now residing in Hammersmith, “being of sound and sane mind and in good bodily health”.(2) The will, dated 25 March 1843, mentions quite a number of properties in his possession of which the rent is to benefit his various sons and daughters. In a codicil, dated 10 May 1845, he leaves his furniture to the daughters of his son Henry: Amy Esther, Louisa and Julia. The executors are his son Henry, nephew William Silver of King William street Charing Cross, and Thomas Rawbone, wine and spirit merchant of Tottenham Court Road.

Henry had married Amy Cadbury on 11 July, 1819 at Welwyn, Hertfordshire, and the couple were to have at least three daughters and three sons. What became of them and whether the sons followed in the grandfather’s and father’s footsteps is unclear. Henry was apparently not as good a businessman as father William was, as in 1844 he is declared bankrupt. He is described as formerly of 186 Piccadilly, but late of Bishop’s Walk, Lambeth and now in the Queen’s Prison.(3) When he dies in 1862, probate of less than £20 is granted to his daughter Birtha (that is: Birtha Louisa) Bridger, wife of James Bridger, a draper’s assistant.(4) 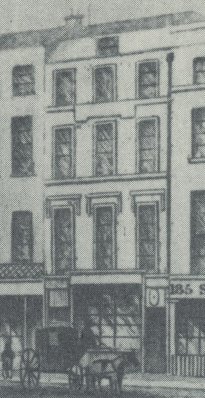 It is difficult for us at a distance of almost two centuries to imagine what a shop like that of the Alnutts had in stock, but a lucky find among an acquisition list of the Joseph Downs Collection of Manuscripts and Printed Ephemera at the Winterthur Library gives us a very interesting peek into the shop. The item is a 3-page printed catalogue of the “articles kept by Allnutt and Son, turners, matlayers, measure makers and brush manufacturers”, divided into subsections corresponding to the various rooms in a house.(5) The blank verso of the last page is used as a receipt for the payment of £1:16 for 4 ivory door handles bought on 24 November 1825, so the list was definitely printed before that date. The shop must have been a veritable treasure trove with an amazing array of goods, ranging from floor mats to toys and from door handles to knitting needles. There are far too many items on the list to mention them all, but I’ll give some examples from each of the subdivisions.

And if all that was not enough, a final line advertises “Funerals performed in town and country”. So, although Henry lists himself as ‘just’ a brush maker in the Street View booklet, he – and his father before him – was much more than that.

(1) Proceedings of the Old Bailey, ref. nr.: t18321018-13.
(2) The National Archives; Kew, England; Prerogative Court of Canterbury and Related Probate Jurisdictions: Will Registers: PROB 11/2233.
(3) The London Gazette, 5 March 1844.
(4) England & Wales, National Probate Calendar (Index of Wills and Administrations), 1862.
(5) Many thanks to Jeanne Solensky, librarian at the Winterthur Collection, for providing me with a copy.

In 1821 at St. George’s, Bloomsbury, John Jaques of 102 Hatton Garden married Ann Danks, daughter of Thomas and Elizabeth Danks of 98 Hatton Garden. She was the sister of Michael Danks who continued the carpet business at number 98 and 99 after his father’s death (see here). John Jaques was the son of Thomas Jacques and Mary Phillips and was born on 13 October 1795 in Leather Lane. The family was of Huguenot descend and John’s birth was registered by the Protestant Dissenting (Baptist) Minister W. Smith at Eagle Street Chapel in Red Lion Square, also known as the Kingsgate Chapel.(1) Father Thomas Jaques was an ivory turner at 65 Leather Lane and son John followed in his footsteps. The back of a trade card in the British Museum collection, dated ±1814, shows us the range of items that could be obtained from Thomas Jaques’. Not unexpected were the ivory fans, billiard balls, ivory handles, boxes and cases, but perhaps more surprising are the games, such as Pope Joan, Back Gammon and Cribbage.

front and back of trade card ±1814 ©British Museum

In May 1837, John Jaques gave evidence at the Old Bailey against John Arnold, who was accused of stealing from him a saw, a tap and box, total value 6s. Jaques states that Arnold had been in his employ on and off for two years, but that he was “a very irregular man […] in the habit of coming early, before the other men, and leaving before breakfast”. Arnold confessed to stealing the articles and was sentenced to transportation for seven years. As an aside, at the end of the transcript it says between brackets “(The prosecutor stated that the prisoner had previously robbed him, and had been forgiven.)”(2)

By the time Tallis’s Street Views came out, the firm had expanded to Hatton Garden and in the Tallis advertisement (above), it can clearly be seen that it was not just ivory they dealt in, but also hardwood and pearl. The list of items already shows a greater emphasis on games and that was what the firm became known for, especially John (II), the son of John and Ann, had a vivid imagination which allowed him to invent all sorts of games we still play. Around 1840, John (II) invented Happy Families; Snakes and Ladders, Ludo and Tiddledy-Winks were to follow. 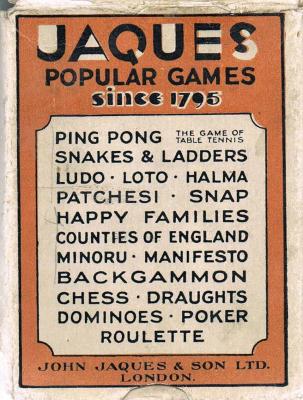 Back of box of Counties of England (Source: www.card-tower.eu)

The 1841 census shows John (I) and Ann with daughter Mary and son John (II) living above the Hatton Garden shop, but in the 1851 census they are found at 78 Belitha Villas, Islington. On the 31st of January, 1860 John (II) marries Harriet Ingram Cooke at St. John’s, Notting Hill and the 1861 census sees the newly-weds at 4 Caroline Place. John (I) and Ann are then living at 31 Doughty Street. John (III) is born on 3 September 1862 and baptised in January 1863.
In early 1867, John (I) retires from the business and a notice in the London Gazette of 22 February announces that John Jacques junior is from then on solely responsible for the firm. John and Harriet move once again as in the 1871 census they are found at 50 Holland Street; John (I) and Ann live at 52 Argyll Road and that is were John senior dies on 18 May 1877.(3) In the 1891 census, John (II) and Harriet are residing at ‘Hillside’, Duppas Hill, Croyden with sons John (III), Percy (both ivory workers) and Alfred, a printer, daughter Ellen, and five servants. John (II) dies 3 April, 1898, and a notice in the London Gazette of 20 May, urges all creditors to put in their claims before the 1st of July with Peacock and Goddard, solicitors for the executors.(4)

The Great Exhibition of 1851 was perhaps the watershed in the fortune of the Jacques firm as John (II) introduces a new game there for which he received a gold medal: croquet. Various forms of similar games had been played before, for instance in Ireland, but it was the version that Jaques introduced that became an enormous success. In 1862, he took out a patent on the game of “croquêt” – it was to lose its circumflex a few years later. Jaques was astute enough to sell complete kits from his shop which included a booklet with the rules. By 1867, sixty-five thousand rule books had been sold. One of the attractions of the game was the fact that it could be played by both sexes at the same time and also outdoors which gave it an air of informality.

When John Jaques (III) joined the company in the 1880s, he expanded it to include all kinds of sports equipment such as for cricket, tennis, football, hockey, badminton and archery. He also invented table tennis (first called Gossima). Subsequent generations kept the company in the forefront of the games and sports industry, but after a devastating bombardment in the Blitz, no longer at Hatton Garden, but first at Thornton Heath, Surrey and these days in Edenbridge, Kent.(5)