The index to the Tallis Street View booklet simply says that Wedgwood & Co produced manifold writers, but the vignette that they had in the booklet proudly has the lettering “R. Wedgwood’s improved manifold writers & machines for the blind” on the facade, but just in case you did not realise how important they were, the caption to the vignette tells you that Wedgwood & Co. were the “sole inventors & patentees of the improved manifold writer for copying letters, invoices, &c.” Ralph Wedgewood, of Charles Street, Hampstead Road, had received the patent for his “apparatus for producing duplicates of writing” on 7 October 1806. A specification of the invention can be read in the Repertory of Arts, Manufactures, and Agriculture of September 1807 (online here). It was an early form of carbon copying, a technique that would really only take off in the 1870s when typewriters and an easier way to produce the carbon paper became available. To make the invention usable for the blind, Wedgwood also invented the ‘nocto polograph’ or ‘nocto-graph’ which consisted of a frame to be placed over the paper with guidelines to make sure one kept one’s writing straight.

Wedgwood was not the only one to lay claim to the invention of carbon copying. Several competitors alleged that their system was much improved upon the design of Wedgwood, for instance Frederick Bartholomew Folsch, whose system included an ink pen rather than the metal stylus Wedgwood promoted. A specification of his invention can be read in the Repertory of Arts, Manufactures, and Agriculture of September 1809 (online here). Folsch and Wedgwood had some sort of economic relationship that is not yet entirely clear. They had neighbouring shops in Oxford Street until 1821 and in some years, the Land Tax records bracketed the properties together despite having different occupants.

According to the land tax records, Wedgwood moved to a property further up the street in 1821, but they were slightly behind with their administration, as already in 1819, Wedgwood advertised his manifold writer from 345 Oxford Street. Number 327 was henceforth occupied by a Richard Spratson. These changed were no doubt related to the fact that a block of houses around Folsch’s property (numbers 324-329) had been redeemed for the construction of Regent Circus (now called Oxford Circus) and Folsch received compensation for the loss of his premises at both 327 and 328 Oxford Street.(1) The question is, why would he receive compensation in 1816 for both properties? He is never mentioned as having two houses in the Land Tax records. The same question has been asked in the Bodleian Library blog post ‘Copycat Copiers? Frederick Folsch, Ralph Wedgwood, and the “Improved Manifold Writer”‘ (see here), but so far, there does not seem to be a logical answer, although the most likely is that Folsch held the lease and Wedgwood rented from him. I recommend you read the Bodleian blog post for all the additional information it gives on the carbon copying invention and the apparent competition between Wedgwood and Folsch. What is clear from the tax records, is that Folsch’s name continued to be listed for number 327, at least till 1850, which is strange, as the houses disappeared and Tallis does not list Folsch or his immediate neighbours; he jumps from house number 325 to 332.

From 1827 onwards, Wedgwood was trading from 4 Portland Place, although he seems to have hung onto 345 Oxford Street, at least till 1845, but he does not mention that address in his advertisements. Another confusing thing is that the inventor Ralph had a son Ralph who went into the business. The son was usually distinguished from his father by the addition of ‘junior’ to his name, for instance in the advertisement in The Examiner shown below, but the Land Tax records are silent on this point, so it is unclear whether the son or the father is the occupants of the Oxford Street properties. Ralph senior died in 1837 and after that year, the Land Tax records no longer mention a first name or initial for Wedgwood at Oxford Street, so it is possible that another family member took over the premises. It is, however, clear that it was Ralph junior who occupied 4 Rathbone Place and Ralph junior who was listed in Tallis’s Street View.

In 1840, an advertisement for Wedgwood’s manifold writers casually mentions the fact that the partnership between Wedgwood and one Mr. Squire has been dissolved by mutual consent.(3) An ordinary notice, officially recognised by a similar entry in The London Gazette of 1 September 1840, but all was not what it seemed, as there had been trouble between the partners. The London Metropolitan Archives list a record, dated September 1840, of the Middlesex Sessions of the Peace in which William Squire, of 18 Furtess Terrace, Kentish Town, and Ralph Wedgwood, of 4 Rathbone Place, are bound over to keep the peace towards each other. I have not seen the documents, so no idea what the argument between the gentlemen was, but it does put a slightly different slant on the phrase ‘by mutual consent’. On 13 January 1841, an advertisement appeared in The Morning Chronicle in which Squire offered “Squire’s manifold writers” from 9 City Road and in which he lists himself as “Squire (late Wedgwood and Squire)”. Apparently he still found it necessary to use the Wedgwood name to underline the quality of ‘his’ product despite the acrimonious parting with his former partner. 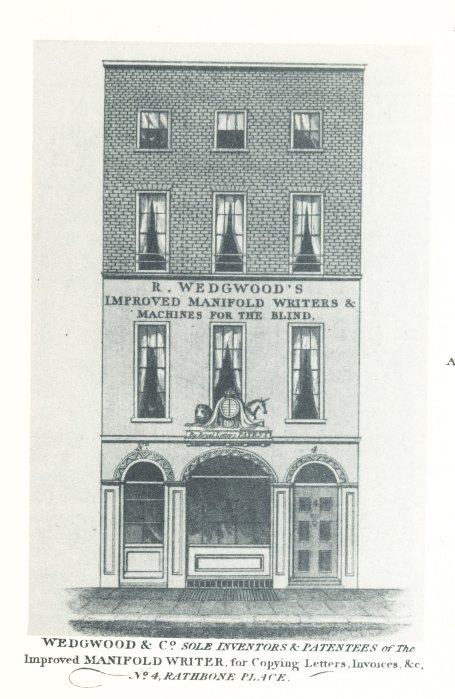 advertisement from The Examiner, 20 October 1833

In 1851, Wedgwood junior obtained the freedom of the City through the Company of Loriners by redemption on paying the fine of 46s 6d. The document with the oath he swore at the Guildhall on the occasion has been preserved. Another document in the file tells us that he was the son of Ralph, late of Chelsea, Gent., deceased, and that he was living at 84 Lombard Street. An advertisement in The Times of 2 November 1849 gives the Lombard Street address with the addition “late of Rathbone Place”, so presumably a recent move. The blue advertorial sheet above from the Science Museum also has the Lombard Street address. Wedgwood died in October 1866 and was then living at Castlenau Villas, Barnes.(4) 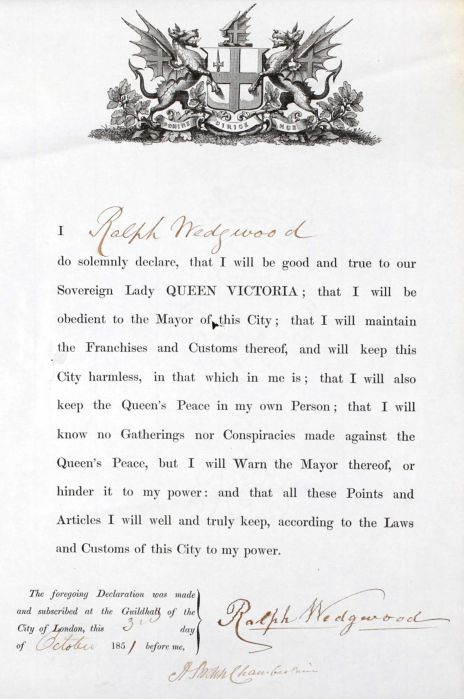 In August 1817, a “J. Foster (late partner with N. Story)” advertised as “the only manufacturer of the improved French dyeing balls” at 39 Rathbone Place. He or she also sold Eau de Cologne, gloves and other hosiery and haberdashery. In a nice piece of editorial irony, the advertisement for Miss N. Story’s “celebrated French dyeing balls” was placed next to Foster’s. Miss Story sold her wares from 44 Rathbone Place and warns her customers of “spurious imitations”.(1) I think we can surmise a serious falling out between the erstwhile partners. Foster did not last very long at number 39 and in 1820 he advertised his removal to Percy Street.(2) The next occupant is one Marr who had an East India and French Cambric Warehouse.(3) That shop did not last very long either and neither did the next one as in 1823, the “shop and house fixtures” of one John Collier, a bankrupt, were sold on the premises at 39 Rathbone Place.(4)

It is becoming rather dreary, but in 1825, the partnership between John Richard Evans and James George at number 39 is dissolved.(5) Who occupies the shop next is not entirely clear, but in 1832, it is definitely in the occupation of Israel Belasco, fruiterer and general dealer. Not that his story is all that much more positive as the first mention of him is in the ‘List of prisoners brought into custody’ of Marshalsea Prison on 16 February 1832 at the instigation of S. Nathan who was apparently owed £50. Two and a half months later, proceedings against Belasco were discussed at the Bankruptcy court.(6) No more is heard of the case, so presumably Israel managed to stave of his creditors. We find him in the 1839 Pigot’s Directory, still at 39 Rathbone Place and as we know, he was there when Tallis produced his Street View, but – you guessed – not for much longer.

On 11 December 1843, Belasco was giving evidence in an Old Bailey case against the employee of one Poole. Belasco had employed Poole’s assistant to “bring goods from the City to my stall”. The boy had been given money to get six boxes of oranges from a Mr. Knill of Botolph Lane, but absconded with the money. In his defence he said he got drunk and lost the money.(7) Not very exciting; cases like this were daily routine at the Old Bailey, but in this case it does tell us that Belasco no longer had the shop in Rathbone Place, but was trading from a stall in Covent Garden market. In the 1851 census, we find Israel and his family at 6 Clare Court, but whether he just lived there and still had his stall at Covent Garden is not made clear. Ten years later, he is listed as a fruiterer at 49 Great Queen Street. He died in September 1866 and was buried at Novo Cemetery, Mile End.

That would have been the end of the story for a fruiterer who only briefly occupied the premises listed in Tallis’s Street View, but for the fact that he was also a boxer, or a pugilist as they tended to be called. We are talking bare-knuckle fights here, by the way. At least three of Israel’s brothers were also boxers of which Abraham, or Aby, was the more famous. Aby was officially a licenced victualler, but later became the keeper of gambling houses and thinly disguised brothels.(8) Israel was no mean fighter either and the Jewish Encyclopedia tells us that his first appearance as a prize-fighter was on 23 July, 1817, at Moulsey Hurst where he was defeated after a fight of thirty rounds by Ned Brown. Sometimes he won, sometimes he lost, and his last match seems to have been in March 1823 when he fought against Arthur Matthewson from Birmingham. A report in The Morning Chronicle relates how teeth, noses and mouths were targeted with the spilling of a lot of blood as a result.(9) Barbaric ‘sport’ if you ask me, but no doubt a nice source of income for the winner as prize money seems to have been between £25 and £50.

Front and back of cigarette card