It looks as if the property of John Newton, cork cutter, was wrongly numbered as 51 by Tallis on his street plan, as it makes no sense that the next-door neighbour is no. 49. Newton’s house should be no. 50 as the numbering was still consecutive in those days. On the other side of the alley were three houses combined, incorrectly numbered on the street plan as nos. 52-54, but correctly labelled 51-53 in the Tallis index, and listed for Field, the straw hat maker. An 1821 plan of the parish of St. Sepulchre also shows 50 between the alley and no. 49, so that was the correct number for Newton’s cork cutting business.

detail of a 1821 plan of the parish of St. Sepulchre by B.H. Gardner 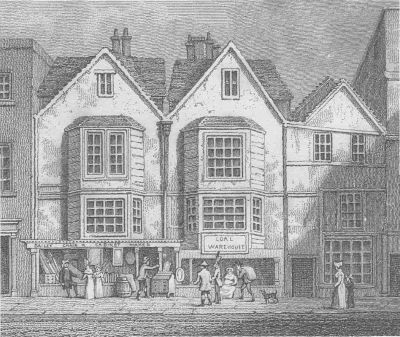 16th-century houses before their demolition in c. 1814 (Source: Survey of London via British History Online)

To make life complicated, the house numbering changed dramatically somewhere between 1861 and 1871 with the odd numbers on one side of the street and the even numbers on the other and what was number 50 became 73. The house is still there, but the alley has been built in and, together with number 69 (which used to be number 51) looks rather squashed between the larger buildings on either side. According to volume 46 of the Survey of London the houses were built in 1817-18 to replace the sixteenth-century ones that are thought to have been part of the mansion of Sir Thomas Forster in St John’s Lane. Holden’s 1811 London and Country Directory lists John Newton jun, cork cutter, at 54 St. John Street and there is also an 1810 insurance record for John Newton at number 54. The fact that the directory lists him as junior, certainly suggests that there should also be a John senior and we do find another John at number 56 in 1811 as a brass founder.

However, the cork business had existed for longer than that, as in 1791, the newspapers reported on a fire that started at Mr. Labrow’s chemist shop and spread to several businesses, among them that of Mr. Blower, a tallow chandler and Mr. Newton, cork cutter. This must, however, been on the other side of the street as Labrow had his shop at no. 128 and Blower at no. 135. Unfortunately, two directories from around the time do not list cork cutter Newton. We can follow John Newton’s business from 1810 onwards through the insurance records of the Sun Fire Office. In that year he insured his “household goods, wearing apparel, printed books and plate in his dwelling house” at 54 St. John Street for £150 on the proviso that no cork was burnt on the premises. His stock and utensils at that same address were insured for £50 and his stock and utensils in his warehouse in the Skin Market, Islington, for £300. In 1813 he insured 55 St. John Street: his household goods for £200, his stock and utensils for £100 and his stock and utensils in the Skin Market again for £300. The total of his insured possessions had gone up from £500 to £600, and went up again in 1814 to £700.

The Sheep Skin Market had been situated near Northampton Square, where now the Brunswick Estate can be found, but the area was redeveloped in the years following 1815, so it is no surprise that the next insurance record finds Newton with a warehouse in East Street near Globe Road, Mile End (also designated as East Street, Globe Fields). From 1819, we find Newton at 50 St. John Street, still with the additional warehouse in East Street, and the total value insured has now gone up to £1000. He was obviously doing alright for himself and in 1820 the Sun Fire Office record shows him adding china and glass, worth £50, to his insurance policy and in 1823 even musical instruments for £25 and pictures and prints for another £25. Newton must have been the first occupant of the new building at number 50, as we saw in the Survey that it had been built in 1817-1818. From then on, we always find our cork cutter at 50 St. John Street, that is, until 1848 (or perhaps a few years earlier) when, according to the Post Office Directory number 51 was added to the Newton business.

In 1841, one of the errand boys of Newton stole some 20l in copper coins from his master. James, the son of John (although the Old Bailey report mistakenly calls the father James) Newton, gave evidence and described that “there is an area-gate in the front of the premises, the key of which hung on a hook over the desk in the front shop”. Morley, the errand boy, had tried to get Fisher, an apprentice, to help him, but Fisher was reluctant to participate in the robbery, although he did help Morley with opening the padlock on the gate. Morley left some of the stolen money for Fisher, but he would not touch it. Everything came out and Morley was sentenced to transportation for fifteen years. The whole transcript of the Old Bailey case can be found here.

stack of cork beneath a cork tree (source: hideawayinspain.com)

In 1842, son James Newton married his neighbour Eliza, the daughter of James Field, straw hat manufacturer, and no. 51 was apparently signed over from the Fields to the Newtons sometime after that date, as in the 1851 census we see widow Frances Elizabeth Newton (John had died in 1845) living at no. 50 and James and Eliza at no. 51. The 1843 Post Office Directory still only lists no. 50 for the cork business, so presumably James took over no. 51 after that. Frances died in 1854 and was then living at 71 Euston Square. She left her share of the business to her daughter Elizabeth and her son James. Her other son George received a hundred pounds.(1)

James and his growing family did not remain at number 51, but could in the 1861 census be found at Paradise Cottages, Green Lane, Islington. His son James Field Newton, 17 years old, was also listed as a cork manufacturer. The census listed a packer, a housekeeper, and a shopman at no. 50 St. John Street; no one was living at no. 51. And in the 1871 and 1881 censuses, that is, after the numbering had changed, no one was living at either no. 69, 71 or 73. James died in 1867 and James Field in 1873. James Field had left his father’s estate unadministered and his brother Frederick George arranged probate for both estates in 1873 and 1874.(3) The business was continued in St. John Street by widow Eliza and in 1871 the census lists her as employing 18 men and 5 boys. In 1881, Frederick, his sister Elizabeth, and his younger brother Sidney, all unmarried, were living together at 27, Stapleton Hall Road.

In March 1882, there was a fire in the cork warehouse which, according to the newspaper report, raged for several hours and only left the walls standing.(3) According to the London Historic Asset Assessment the property was rebuilt after the fire with the extension over the alley, but judging by the numbering in the 1871 census, the building-over of the alley probably took place quite a number of years earlier. Why else would numbers 50 and 51 suddenly get 3 house numbers: 69, 71 and 73?

The cork business at 69-73 St. John Street continued at least till 1912 when the telephone directory lists them there, but I found no evidence for them after that date. They are certainly not listed in Hughes’ Business Directory of 1821. 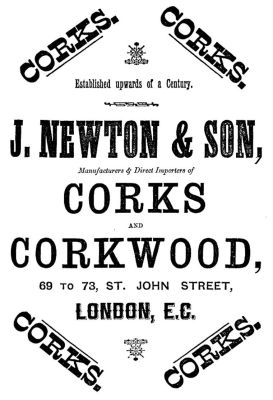