In 1784, Nicholas Bradbee was apprenticed to James Rogers of Dowgate Hill, a barber. Rogers promised to teach Bradbee in seven years the “art or mystery of barber and peruke maker”. After his apprenticeship (in 1791), Nicholas set up on his own, not as might be expected as a hairdresser, but as a silk lace and worsted fringe manufacturer at 115 Newgate Street. One year later, he married Rebecca Leah Whiffin; the couple had at least six children (Ann, Mary, Philip, John, Rebecca and George Whiffin). Nicholas unfortunately died in May 1815 and Rebecca had to continue the business on her own until the youngest son, George Whiffin, was old enough to take over. The 1821 insurance with the Sun Fire Office is still in Rebecca’s name, but the 1823 entry is for George Whiffin “lace and fringe manufacturer”. 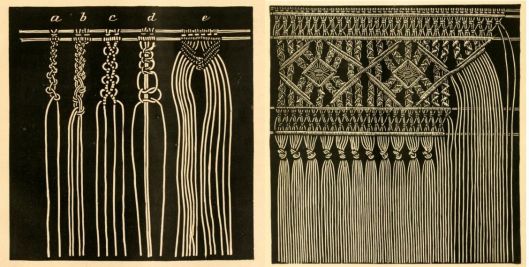 Fringes were very much in vogue in the Victorian era and anything from chairs, parasols, purses and curtains were fashioned with a macramé fringe. Have a look here for John Hopper’s blog post on macramé. Numerous handbooks on needlework mentioned macramé, or macramé lace as it was usually called, but some books were entirely devoted to fringe making. A good example is The Imperial Macramé Lace Book by the Barbour Brothers of New York which explains the intricacies of the lace work step by step. Another work with a typical long title was Complete guide to the work-table. Containing instructions in Berlin work, crochet, drawn-thread work, embroidery, knitting, knotting or macramé, lace, netting, poonah painting, & tatting, with numerous illustrations and coloured designs. The work had originally been published as separate supplements to The Young Ladies’ Journal, but was obviously so popular that more editions had to be issued.

In 1842, a small booklet was issued by Mrs Bradbee (I assume this is Rebecca), The Lady’s Fancy Needlework Instructor. It was sold at 115 Newgate Street, in St. Paul’s Churchyard, and at 75 King’s Road, Brighton, where the Bradbee’s also had a shop. I have not seen a copy of Mrs Bradbee’s instruction book, so cannot tell you what it looks like or what needlework techniques she described, but if you are determined to see for yourself, there is one in the Royal Collection.

George Whiffin married Mary Bean in 1823; the couple had four daughters and one son, George Whiffin junior, who joined his father in the business. Nothing very much happened for quite some years, except someone stealing in and frightening Miss Sweetlove, a guest of the Bradbees, in 1835(1) and the death of Rebecca in 1847(2). In 1851, at the Great Exhibition, Bradbee showed his needlework and fringes on 5 feet of counter and 48 feet of wall.(3) The Illustrated London News of 11 October 1851 qualified Bradbee’s tassel work as simple, but “most charming” and as “clearly copied from Oriental originals”. The fringes, however, meet with less praise; they are considered “more quaint than tasteful”. 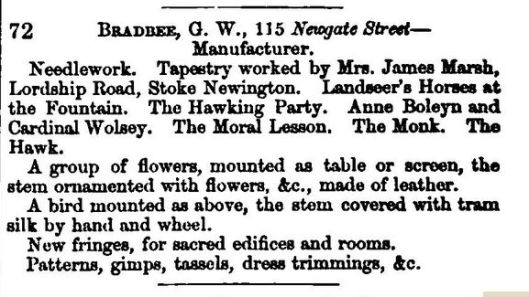 Entry in the Official descriptive and illustrated catalogue of the Great exhibition, vol. 2 (1851), p. 562

In 1854, young George Whiffin “of the Grange, Willesden Green, and Newgate-street” married Louisa, widow of Edward Prosser Esq., “of Glynfield House, Willesden, and Laurence-Lane, Cheapside”. So far, so good, Louisa was a good match and she gave G.W. junior some £2,700 as gifts in the fourteen months after the marriage. The money turned out to be more than necessary and in 1855, things came to a head; Bradbee senior and Bradbee junior were declared bankrupt. The case in the Court of Bankruptcy dragged on for quite a while, because they would not give a complete account of their assets and G.W. senior was even accused of papering over a cupboard to conceal the items in it, although it turned out to have been just some glass and china “not of much value” and the concealing was probably done by a previous (bankrupt) occupant of the house. The furniture at the Willesden house “had been nearly all swallowed up in paying arrears of rent”. The accounts that were made up by Messrs. Harding and Pullein for the period from 1 January 1850 show that the sale of the goodwill for the Brighton business brought £500 to the balance and the sale of the lease of a house a little over £220. Junior’s account showed a positive balance, but senior’s dealings were one big black hole; he appeared to have used the money junior received from his wife’s trustees to plug the holes in his own finances rather than investing them in the business and there had been some dodgy dealings with bonds. The final outcome was that the Bradbees were judged to be guilty of reckless trading and their certificates were of the third (for G.W. senior) and second (for G.W. junior) class.(4) A second-class certificate was issued when the debtor had acted careless or reckless, but not dishonest. A third-class certificate, however, was issued when the bankruptcy was caused by dishonesty.

In most cases, a bankruptcy like this would be the end of a business and no more would be heard of the people involved. In this case it was certainly the end of the business and G.W. senior seems to have become a landlord (he died in 1891). G.W. junior, however, managed to get his name into the papers again. In 1875, a news item in Lloyd’s Weekly Newspaper of 21 November speaks of the petition of the wife of a picture dealer for a divorce on the grounds of her husband’s adultery and cruelty. The wife turns out to be Louisa Bradbee who related that she married Bradbee in July 1854 and that they had moved to Brussels in 1870. While there, she discovered that her husband had started an affair with a Madame Leman. When confronted, Bradbee promised to give up his lover, but not just yet, as the woman was “enceinte” as the newspaper put it. Mrs Bradbee offered to provide for the child if he would end the relation with Leman. Although he promised to do so, he was discovered to be living in Baker Street with a woman other than his wife. Lloyd’s Weekly does not disclose this woman’s name, but The Observer reporting on the same case alleged it was the same woman as the one Bradbee had had a liaison with in Brussels. The divorce was granted and in 24 February 1877, Bradbee married Jean Clemence Lemmens “late of Brussels” in Paris.(5) Although the name is not quite the same Leman – Lemmens, I think we can assume that it concerns the same woman. Louisa took the name of her first husband again and lived for another twenty years. She died in late 1895 or early 1896 in Nieuport, Belgium.(6) In 1891, George Whiffin (occupation given as antiquary) and Clemence were living in Hans Road, Kensington, with two of their daughters. In 1901, they are living in Halsey Street, Chelsea; G.W.’s occupation is once again given as picture dealer. He seems to have died in 1906.(7) 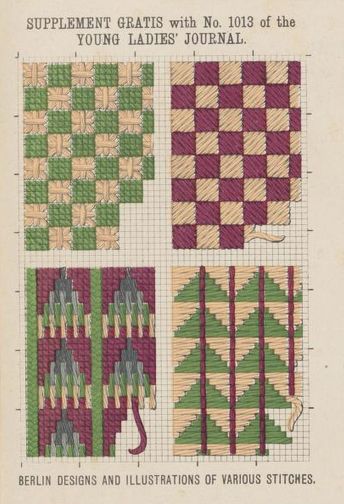