Cripplegate Buildings as a street name no longer exists. It used to be the top section of Wood Street, between London Wall and Fore Street. Once upon a time, Cripple Gate stood across the southern end of the street as one of the entrance points to the City. You can still see it written in the Ordnance Survey map of 1893, although the gate itself had been demolished in 1760. The Cripplegate area was badly hit during the Blitz and in the 1960s largely replaced by the Barbican Estate. 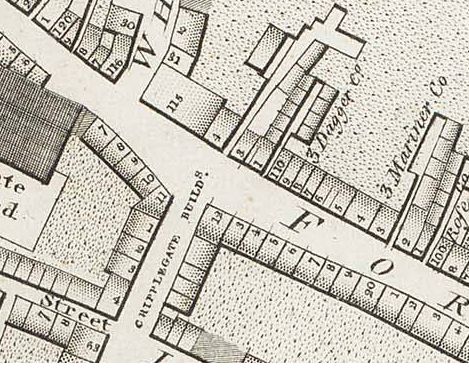 If you compare the 1799 Horwood map above with the Ordnance Survey map below, you will see that there are fewer, but larger, houses in the street. Most houses have been enlarged at the back, encroaching on the gardens and yards that used to exist in the centre of the housing blocks. Number 1, at the top left-hand side of the street used to look out at the back onto the churchyard of St. Giles without Cripplegate, but already by 1893, it was completely built in by the extensions to the neighbouring houses.

At the time Tallis produced his Street Views, Richard Finden occupied 1 Cripplegate Buildings where he ran a baby linen warehouse. In the 1841 census, his household consisted of himself (50 years old), his wife Sarah (also 50 years old), 2 milliner’s apprentices (both 14 years old) and a servant. But by 1845, Theophilus Carr, a silk velvet manufacturer is listed for the address in the Post Office Directory. He did not last very long as in 1847, The London Gazette writes that Caleb Pizzie had been trading in artificial flowers, etc. at 1 Cripplegate Buildings in partnership with John Pardue the younger. That same year, one Hesketh Hughes registered a “rouche tray”. More on that invention later, but first a bit more on the later occupants of the building. The 1851 census lists Isaac Lyons there with his family as umbrella and parasol maker, but at the end of that year, bankruptcy proceedings had been filed against him and his partner Henry Woolf. Businesses did not seem to last very long in this particular building, although not all went bankrupt of course; some died and some simply moved away. The next shopkeeper we hear about is haberdasher Charles Philip Townsend, but in the 1861 census we find yet another name: Robert W. Morton. He is listed as the Principal of the City Academy, although he probably just rented (part of?) the house as the Land Tax records give A. Duffie as the owner. Well, I could go on, but we will leave it here and try and find a bit more information on some of the occupants. I would normally concentrate on whoever ran the shop at the time of the Street View, that is in 1839, but there was not a lot I could find out about Richard Finden, so to flesh out this post, I have chosen to write something about two of the later occupants as well.

Finden
First Richard Finden. After all, he is the one listed there in the Street View. A bit of digging in the records revealed that Richard paid land tax on the Cripplegate property from 1823 to 1842, so his was not such a short-lived occupancy as those who came after him. 1823, by the way, was also the year in which Richard purchased his freedom of the Spectacle Makers Company by redemption for 46s 8d. On the freedom document, his occupation is given as warehouseman. What happened after 1842 is unclear, but a Richard Finden of 11 Charles Street (58 years old) was buried on 11 February 1847 at St. John’s, Hoxton. No guarantee that this is the same Richard, but it is likely. Alas, this is all I can tell you about Richard Finden and his baby linen warehouse, so we will move on to another occupant. 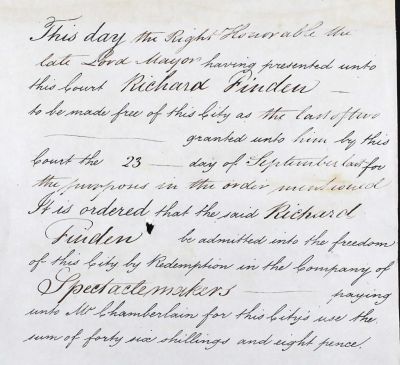 Hughes
Hesketh Hughes does not figure in the Land Tax records at all, so presumably he just rented the property for a short time. We do find his name with the Cripplegate address in the registration of the ‘rouche tray’ as mentioned above, but that was not his first patent. In 1844, then at Chiswell Street, he registered “an improved machine for crimpling, fluting, and quilling muslin and other fabrics”.(1) Registrations and patents were frequently used to protect one’s inventions from being copied by competitors, but in 1847, Hughes ran into trouble with his ‘invention’.(2) On 12 April 1847, at the Guildhall, the case Webb v. Hughes was heard.(3) George Webb of Wood Street and Manchester alleged that he had registered an original design for a protective rouche tray(4) and that Hughes had sold a fraudulent imitation of his design. Fortunately for us, it was explained at the hearing what a rouche tray was: Rouche is a piece of thin lace of about two inches in width and a yard in length. It is first crimped (goffered) and then a thread is run down the centre. The lace is then folded in half. Before the invented tray, rouche was kept in round boxes containing three tiers whereby only one-third of the lace could be displayed and no part could be removed without disturbing the others. Webb had therefore invented a long shallow box and used paper folded into ridges to keep the lace apart. The total capacity of the box was the same as the old round ones, but the whole length of lace could now be shown to customers. Hughes had apparently slightly modified Webb’s design by opening up the ridges of the paper.

The report showed the resulting difference in ridges and one of the experts called to give evidence in the case went to great length to explain what was new in Hughes’ design and why Webb’s registration had been faulty as it had not stated specifically which bits of the design were new. And because of that, it could not be objected to if Hughes varied the design. In the end, the two aldermen could not agree on a verdict and Webb and Hughes were told to “persue any other remedy they had” and dismissed. Obviously not the aldermen’s best day in office.

Townsend
From Charles Philip Townsend we learn a few details about the property itself. Townsend, a haberdasher, lived at 3, Victoria Villas, Queen’s Road, Dalston, but had his business at 1 Cripplegate Buildings. In 1857, someone broke into his warehouse and as part of the evidence, Townsend described how he and one of his employees left the property in Cripplegate Buildings,
“I have a warehouse … on the ground floor – there are two doors to the warehouse, one communicating directly with the street, the other opens into the passage of the house – on the evening of 13th March I left the warehouse about a quarter before 8 o’clock – both the doors were shut, and fast – the outer door was shut by my assistant – I shut and locked the side door, which opens into the passage.”(5)
A policeman, Henry Hemmings, tried the door of the warehouse at 20 past 10 that evening; it was then locked. The house above the warehouse was occupied by Charles Harding, a schoolmaster, who also gave evidence. When Harding came home at about half past ten, he saw the thief come out of the warehouse door and when he confronted him, he was hit with a lantern, resulting in a nose bleed. He nevertheless followed the thief who was apprehended in Three Nun Court. When Harding returned to his house, he found a wedge, a crowbar and a pile of sacks. The perpetrator was found guilty and sentenced to twelve months. As we saw above, Townsend did not remain at 1 Cripplegate Buildings for very long and many more businesses were to use the address after him.

Redevelopment
In 1879-1880, the eastern side of the street and some houses around the corner in Fore Street were redeveloped, resulting in the larger houses shown on the Ordnance Survey map. The Land Tax records very clearly show “down” in 1879 and “rebuilt” in 1880, but for the western side of the street, that is the side where number 1 was on, the situation is not so easy to read from the Tax record. Numbers 1 and 2 were empty in the early 1860s, but that seems to have been by chance and only from the census records twenty years later do we learn that the houses were actually razed to the ground and rebuilt. The 1881 census record says, “Warehouses recently built. 5 warehouses built on the site of 11 houses Forestreet and Cripplegate Buildings”. Number 3 was amalgamated with number 4 and occupied at the time of the census, but numbers 1 and 2 were empty, or at least, nobody stayed the night which was the condition for recording a name in the census. In the 1891 census, numbers 1 and 2 are still unoccupied, in other words, what had once been houses and shops had been converted into warehouses where nobody lived.

And what used to be Cripplegate Buildings 1-4 is now part of the Barbican Estate as you can see on the left in the Google Street View below. 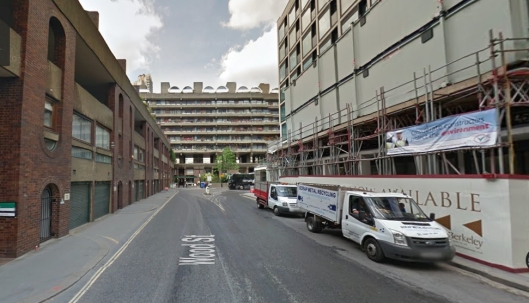