If you turned from Holborn into Red Lion Street, Manfield’s business could be found in the 6th house from the corner on the right-hand side. The building that provided Isaac Manfield and his family with a home no longer exists. The whole block between Red Lion Street and Hand Court is now taken up by the modern steel and glass MidCity Place, but the Red Lion Street section used to consist of 15 houses, that is, excluding the corner properties. 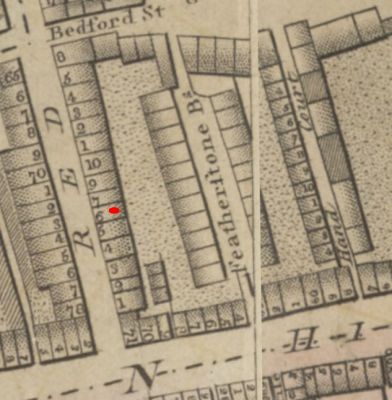 Although Manfield is listed in the Street View index as a wire worker, he was much more. The elevation at the top of this post already gives us a clue that his business entailed more than the production of wire baskets as he styled himself “importer & dealer of foreign birds”, but we will start with the wire business.
According to part 3 of Tabart’s Book of Trades (1807) a wire-drawer could earn from one to two guineas a week, but as Manfield was the owner of the business and not just a workman, he must have been able to make more. Tabart describes the various stages of the wire production (see p. 56 here) and depicts a wire-drawer. 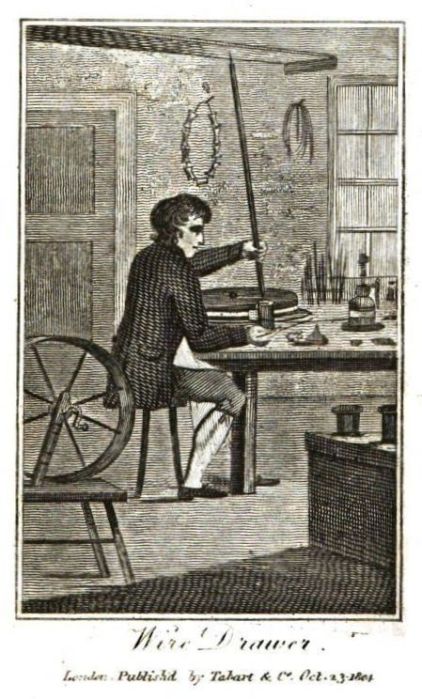 Wire-workers produced all kinds of wire in different metals and one thing that could be made with the wire was bird cages. And this is probably where Manfield’s second line of work came from. A wire-worker who produced cages might as well sell the birds to go with the cage. The cages Manfield sold were famous enough to end up as examples in the Boys’ Own Book and in the extracted version The Little Boy’s Own Book of Sports and Pastimes. 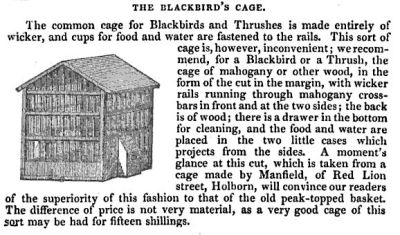 The Little Boy’s Own Book of Sports and Pastimes

Isaac Manfield, who had started the business in Red Lion Street in 1820, insured his property in 1828 and described himself then as “wire worker and bird cage maker, bird stuffer and dealer in birds”, so not just live birds, but also stuffed ones. Isaac placed various advertisements in the newspapers to announce the arrival of newly imported birds from India or Senegal; one of the advertisements also mentioned that he could supply millet seed. Isaac died in 1835, two days after he made his will on 21st of February in which he says he is “of sound mind but weak in body”. His signature certainly does not look as if he is in the best of health.

Isaac left all his wordly goods to his wife Hannah, who registers probate to the value of £600. She continued the business until ± 1850. She was still listed in the 1848 Post Office Directory, but no longer in the one for 1851. The shop at 6 Red Lion Street is taken over by Francis Kidner, a butcher. Isaac and Hannah’s son Isaac Robert (born 1826) seemed to have had no interest in the busines as he is listed in the 1851 census as an ironmonger’s clerk and in the 1861 census as a brass founder’s clerk in Warwickshire. Was he perhaps working for his brother-in-law? Also living at 6 Red Lion Street when the 1841 census was taken, is ironmonger James Goddard and his wife Rebecca. She was the daughter of Isaac and Hannah and the marriage between Rebecca and James had taken place in November 1840. James and his brother Joseph later moved their business to 30 Red Lion Street and 68 Tottenham Court Road.

Rebecca died in late 1847 and in 1850, the widower married Rebecca’s sister Susanna Harriet. Something must have happened to James as in 1853, Susannah married Joseph, James’s brother. The strange thing is that she is then still called a spinster, but there can hardly be any confusion as she is definitely listed as the daughter of Isaac Manfield. Another possibilty is of course a divorce, but before 1858 divorce records were not kept in a national register, so are harder to find. Whatever happened there, Joseph and Susannah were living at 68 Tottenham Court Road at the time of the 1861 census and with them Hannah Mansfield, her mother. Hannah died in 1864.

If you think that the wire worker’s business had ended with Hannah Manfield’s termination of the business at 6 Red Lion Street, you are mistaken, as Joseph Goddard’s Tottenham Court Road business continued the tradition, although – as far as I know – not with birds, stuffed or otherwise, but certainly with metal wires as “music pin & string manufacturers; agents for Smith & Houghton’s patent steel music wires” (Post Office Directory, 1890) and all sorts of other pianoforto supplies. More on the Goddards when I write about 68 Tottenham Court Road.