Tallis, in his Burlington Arcade Street View booklet, tells us that “this beautiful arcade was the first of that description of building in London, and is composed of elegant shops, principally for the sale of fancy articles. It forms a morning lounge for the fashionable, and is particularly adapted for such in inclement weather, since its skylight shelters it from rain and wind”. The situation has not changed much since the Asser family ran their businesses from the arcade as the roof still protects the shopper from the weather and the shops still sell luxury goods. I have chosen to write about the two establishments the Assers had in the Arcade together as there was a close family link. Louisa was a milliner and artificial florist at number 59 and Solomon an artificial florist at number 9, or, at least, that is how Tallis described them in his Street Directory. But things are not so straightforward when we look a little further. Solomon had put an advertisement in the Tallis booklet, which says that he is trading from numbers 8 and 9, and that, besides flowers, he also supplied feathers. 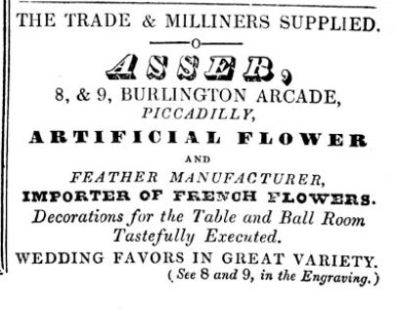 Number 8, however, is listed in Tallis’s directory for a cutler by the name of Underwood, and the 1843 Post Office Directory lists a Miss Mary Underwood, cutler, at number 8. I presume that Solomon used the whole of number 9 and part of number 8, but exactly how the division worked is unclear. The 1886 insurance map by Goad shows 8 and 9 as one shop without any internal division. I will come back to Underwood in a later post. But first Solomon who made it into the newspapers in 1846, when he was accused by a Mr. Martin, whip maker of Burlington Arcade, of assault. Martin said that Asser had suddenly rushed into his shop and given him a blow on the chest and one on the head with a whip. Asser defended himself by explaining that he had come to the rescue of Martin’s younger brother who was whipped by Martin for neglecting his duties as a shop boy, and the only way he could stop the fighting was by grabbing the whip. The judge commended Asser for trying to protect the younger boy, but in doing so he had been led into greater violence than was justifiable. Asser was to pay 40s and costs, which led to his aggrieved response that in future he would think twice before interfering when boys were beaten.(1)

1886 insurance map by Goad showing shops no. 8 and 9 outlined in red

In the Tallis Street View, 59 Burlington Arcade was occupied by Louisa Asser who, according to the 1843 Post Office Directory, ran a baby linen warehouse from 56 & 57 Burlington Arcade, so she must have moved shortly after Tallis produced his booklet. The 1841 census confirms this, and, although it does not give any house numbers, we can work out from the order of the people listed that Louisa was resident at number 57. Living with her is Henriette Asser, also a milliner, and two younger servant girls. By 1843, Louisa had extended the business to include number 56 (Post Office Directory). Tallis, in 1839, listed number 57 for a Mr. Hadley, “Hair Cutter. Wig & Scalp Maker. Removed to 10 Marchmount Street, Russell Square”, and number 56 for shoe maker Durlin. We know that Louisa had had her shop in Burlington Arcade at least since 1836 as in March of that year a fire destroyed many properties in Old Bond Street, the Western Exchange and in Burlington Arcade itself. In a newspaper report, Louisa, still at number 59, is mentioned as one of the shopkeepers whose premises were severely damaged. Luckily, she was insured with the Globe insurance company.(2)

Louisa died in 1849 and provided a valuable source of information about the family relations between the Asser shops in her will. At the time of her death, she was living at 25 Westbourne Park Road, not far from Solomon, whom we find at number 33 in the 1851 census. Louisa mentions Solomon in her will as her brother and one of her executors. Louisa wanted her assets to be sold and invested with the dividend to be paid to various family members: her sisters Adelaide and Rachel, her brother Henry, and after the death of the last survivor of these three, to the daughters of her sister Mary Peck. Also mentioned are her brothers Nathaniel and Louis, and various nieces.(3) So, Solomon, the artificial florist, is her brother, and indeed, after Louisa’s death, the baby linen shop at numbers 56 and 57 is taken over by Solomon.

Louisa, Solomon and their siblings were all the children of Asher Asser, a stationer, and Joicey (or Joyce) Levien and over the years, several of them had had a shop in Burlington Arcade.(4) Brothers Henry and Louis had a business as china and glass-men at Burlington Arcade, but their partnership was dissolved in July 1823 with Louis to continue on his own.(5) Louis is later to be found as a glass and china dealer at 147 Regent Street (later changed to a “ready made linen warehouse”) and Henry at 406 Strand. Despite the end of the partnership in 1823, Henry could still be found at the same address as Louis in the 1841 census, apparently working in the same china shop in Regent Street. In 1851, Henry is living with his sisters Adelaide and Rachel at 57 Westbourne Street, all three living on their own means, no doubt facilitated by the capital their sister Louisa had left them. 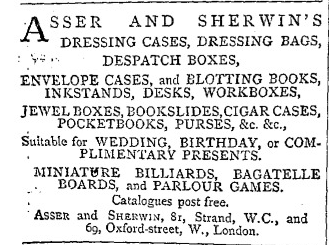 Nathaniel can be found as a tailor at 52 Burlington Arcade in the 1822 and 1825 Pigot’s Directories. He married Mary Ann, the daughter (or possibly sister) of Thomas Sherwin, who also had a shop in Burlington Arcade. After a spate in Scotland, Nathaniel settled in Surrey Street where the 1839 directory finds him as a clothes dealer. After Nathaniel’s death, two of his sons are working in the games industry, no doubt because that was what the Sherwins were involved in. Nathaniel’s son James, who had worked as a solicitor, joined forces with his cousin Charles Sheppard Sherwin (the son of Mary Ann’s brother James) at 81 Strand as dealers and manufacturers of bags, dressing cases, games, and sport equipment (see here). James’s son Ernest, with John Arthur Turnbull, founded the shirt making company Turnbull & Asser, which is still in business in Jermyn Street (see here for portraits of the two founders).

Part of a poem by Joseph Barnard from his Among the Gods, 1874

But let’s get back to where we started. Solomon expanded his business as an artificial florist at number 9 to include numbers 8, 56 and 57. Besides flowers, he also dealt in ostrich feathers, straw hats, fans and various millinery wares. In 1861, the census reported him as employing 20 men, although that probably included more women than men, as the millinery side of the business tended to be a female affair. Solomon died in 1877, naming his second wife Emma, who, by the way, was 30 years younger, as sole executrix.(6) Emma continued the business in Burlington Arcade and is favourably mentioned in a newspaper “column for ladies” about the latest fashion (see illustration below). She also supplied the hats for the wedding of Lieutenant Radcliffe and Miss E.M. Orpen in 1894.(7) We still find her at numbers 8 and 9 in the 1902 Post Office Directory, listed as ladies outfitter. Burlington Arcade 56 and 57 had by then been relinquished and were occupied by Scott, a hosier. According to Dick Sherwin, Emma continued in the Arcade till 1918 and died in 1921.

The Assers in Burlington Arcade (taken from information supplied by Dick Sherwin, directories, census and other records):

(1) Daily News, 30 September 1846.
(2) The Morning Post, 28 March 1836.
(3) PROB 11/2086/21.
(4) Thanks go to Dick Sherwin for providing me with lots of genealogical information on the Asser and Sherwin family.
(5) The London Gazette, 12 July 1823. Although the notice about the partnership only mentions Burlington Arcade, Henry had also been trading from 406 Strand since at least 1822 and where he continued to work afterwards (Pigot’s Directory, 1825).
(6) England & Wales, National Probate Calendar (Index of Wills and Administrations), 1877. Estate valued at under £1,500.
(7) Trewman’s Exeter Flying Post, 3 February 1894.
(8) Adelaide ran the business with her partner Mrs Lawledge. In 1865, advertisements announce their departure from Burlington Arcade to their showrooms at 5 New Bond Street. Even as late as 1871, there are advertisements about their departure from Burlington Arcade, but then their new address is given as 4 Vere Street.