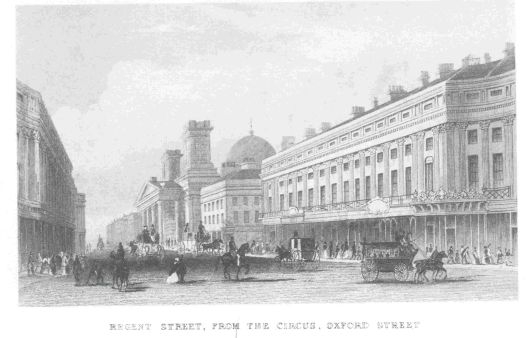 What to do if you live in the country and experience the need for mourning clothes because of a sudden death? You turn – of course – to Messrs. Jay of Regent Street who “have always at command experienced dressmakers and milliners who act as travellers, so that in the event of immediate mourning being required, or any other sudden emergency for dress, one can be despatched to any part of the kingdom on receipt of letter or telegram, without any expense to the purchaser”.(1) 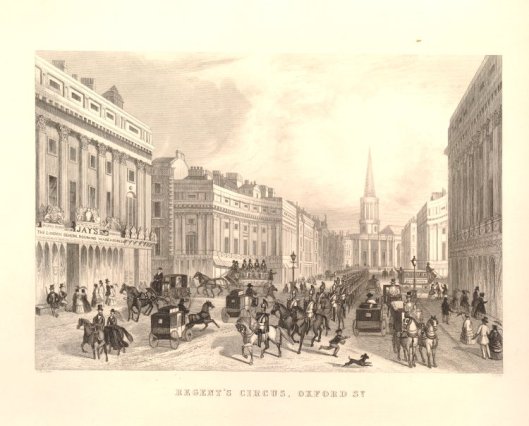 Jay’s started out moderately at number 217 Regent Street (see elevation at the top of this post on the left) as ‘Shawl warehouse’, but expansion soon followed. In 1847 when the Supplement to the Street Views came out, Jay’s were still ‘only’ occupying numbers 247 and 249, but they eventually spread out over almost the whole section of shops on the west side of Regent Street between Princess Street and Oxford Street, from 243 to 251, just missing out on numbers 239 and 241. The shop was frequently depicted in advertisements and other illustrations. 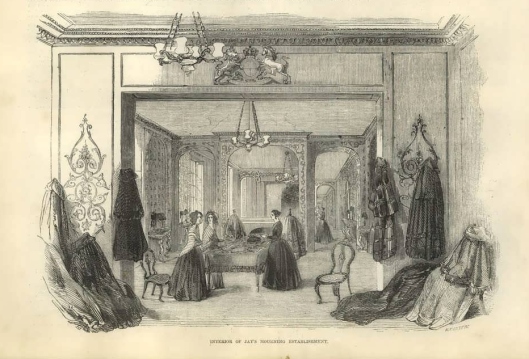 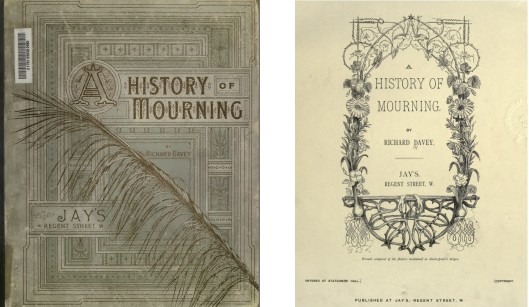 cover and title-page of A History of Mourning

Jay commissioned Richard Davey to write A History of Mourning (online here) in which he tells us that “funeral ceremonies and rites are of the most remote antiquity” The ancient Egyptians apparently chose yellow as the colour of their garments when in mourning, but our custom of wearing black comes from the Greeks. Davey not only writes about the clothes, but also about the funerals themselves, the processions and customs in various countries. He says, for instance, that it was the custom in Norfolk until the beginning of the nineteenth century to give the mourners “black gloves, scarves, and bunches of herbs”. Remember that Pepys frequently received a mourning ring when attending a funeral. Very rarely does Davey touch upon the funeral of ordinary people; it is all about royalty, popes, and famous people like Lord Nelson. But that is not surprising; after all, Jay’s made a living out of selling people things they did not really need, but thought they were obliged to buy to keep up appearances. Their great example of course being Queen Victoria who elevated the art of mourning to a new height. And if you are not exactly sure what the regulations are, Davey will tell you who is responsible for the etiquette, for instance: “The order for Court mourning to be observed for the death of a foreign sovereign is issued by the Foreign Office, and transmitted thence to the Lord Chamberlain”. The notices issued about the mourning are very detailed and specify exactly at what time one is supposed to wear black and when dark grey and whether the gloves should be black or white.

Of course, as the instigator of Davey’s book, Jay’s did not neglect to put themselves in as favourable light as possible, although I would take the phrase “at the very smallest modicum of profit” with a pinch of salt.

Such developments [that is: the percolation to England of Continental ideas in mourning fashion] could scarcely be exhibited in a more marked manner than in Jay’s London General Mourning Warehouse, Regent Street, an establishment which dates from the year 1841, and which during that period has never ceased to increase its resources and to complete its organisation, until it has become, of its kind, a mart unique both for the quality and the nature of its attributes. Of late years the business and enterprise of this firm has enormously increased, and it includes not only all that it necessary for mourning, but also departments devoted to dresses of a more general description, although the colours are confined to such as could be worn for either full or half mourning. Black silks, however, are pre-eminently a speciality of this house, and the Continental journals frequently announce that “la maison Jay de Londres a fait de forts achats.” Their system is one from which they never swerve. It is to buy the commodity direct from the manufacturers, and to supply it to their patrons at the very smallest modicum of profit compatible with the legitimate course of trade. The materials for mourning costumes must always virtually remain unchangeable, and few additions can be made to the lists of silks, crapes, paramattas, cashmeres, grenadines, and tulles as fabrics. They and their modifications must be ever in fashion so long as it continues fashionable to wear mourning at all; but fashion in design, construction, and embellishment may be said to change, not only every month, but well-nigh every week.
The fame of a great house of business like this rests more upon its integrity and the expedition with which commands are executed than anything else. To secure the very best goods, and to have them made up in the best taste and in the latest fashion, is one of the principal aims of the firm, which is not unmindful of legitimate economy. For this purpose, every season competent buyers visit the principal silk marts of Europe, such as Lyons, Genoa, and Milan for the purpose of purchasing all that is best in quality and pattern.

Fashion obviously played a large role in the success of warehouses such as Jay’s. Mourners, despite their grief, still had to keep up with the latest fashion and could certainly not be seen in last year’s model (or even last week’s model if Davey’s eulogy on Jay is to be believed). No mention of the pecuniary value to Jay if fashion changed as often as it did, but it certainly did them no harm. So, ever changing models and material were available in the draper shops, but Jay realised that it was not just clothes the customers were after; they needed ribbons, hats, rings, gloves, hand bags, shoes, flowers, drapery for the house, etc, etc. and he supplied it all, not just for the ladies, but for the whole family.(3) The British Library has a small booklet, Modes des Mantelets (Shelf-mark: C.193.a.275) which was published by Jay for the convenience of customers “at a greater distance from town” and which contains eight lithographed plates in colour of the latest fashion in mantelets and cloaks. For instance: Plate 1, “La Mantelette Sultane de Madame Popelin”, or Plate 6, “La Mantelet Clementine”. Unfortunately, no date is given, but Jay announces in the booklet that he has just taken over the adjoining premises of number 251 in which he “will forthwith open another suite of shew[sic] rooms, amply stored with the various products comprised in his extensive stock, from the principal manufacturing houses, both of London and Paris”. 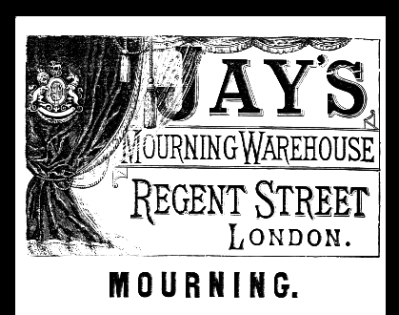 Jay’s was started by William Chickall Jay, who was born around 1811 in Cavendish, Suffolk. He died 27 April 1888 and his probate record showed that he was worth over £100,000. His only son Thomas Simpson Jay was one of the executors.(2) The census records also show several daughters for William and his wife Mathilda Wylie Simpson (they had married in 1838), but no other sons. William Chickall’s grave at Kensall Green, however, shows the names of three sons who were born to the couple but who died very young. The 1851 census is particularly revealing about the size of the business. William, his wife and the surviving five children (Thomas, Elizabeth, Ellen, Ada and Eugene) live above the shop (listed as being at numbers 247 and 249), but also living there are 20 employees, ranging from one of the porters, Henry Jones (21 years old), to a dressmaker, Henrietta Champ (18), and from a milliner, Mary Dixon (widow, 25), to the housekeeper, Sarah Martens (38). It is most likely that more employees came in on a daily basis, but the census just shows those living above the shop.

(1) Advertisement in Bradshaw’s Illustrated Handbook to France, n.d.
(2) England & Wales, National Probate Calendar (Index of Wills and Administrations), 1888.
(3) See for more funeralia http://www.ephemera-society.org.uk/articles/funeralia.html and http://vichist.blogspot.nl/2008/06/victorian-funerals-and-mourning.html?m=1. If you want to know more about mourning clothes in general, have a look at Daphne Nash’s Review of Death Becomes Her: A Century of Mourning Attire.