We all know Michael Faraday and his pioneering work into electromagnetics, but he was not the only technically-minded member of his family. His elder brother Robert ran a gasfitter’s and lighting company in Wardour Street. The land Tax records tell us that he had his business there at least since 1823 and in Pigot’s Directory of 1825, Robert is duly listed as brass manufacturer and founder at number 114. But laying gas pipes was not all Robert did, he was also heavily involved in the development and installation of more efficient lamps. In 1841, for instance, he installed new lighting at Tichborne Street School for the Paddington Schools Committee, and in 1843 he reacted to a report in the newspaper on a comparison made between the Bude and the Faraday lights. Bude lights had been invented by Goldsworthy Gurney and worked by introducing oxygen into the interior of the flame. 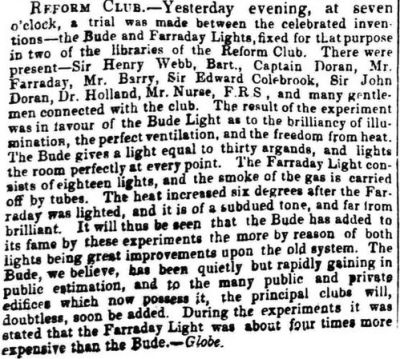 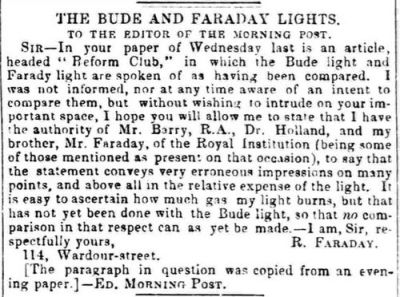 Please note that The Morning Post tried to blame the original report on the evening paper from which they had copied the article. Robert’s brother Michael had struck on the idea of ventilation in lamps when he worked with lighthouses, but he gave the invention to his brother, “I am most happy to give freely all my rights in it over to you”.(1) Robert received the patent for the improvements in ventilating gas- and oil-burners on 25 March 1843.(2) Earlier that same year, Robert’s son James wrote a booklet about the issue, Description of a Mode of Obtaining the Perfect Ventilation of Lamp-burners, explaining the mechanics involved. 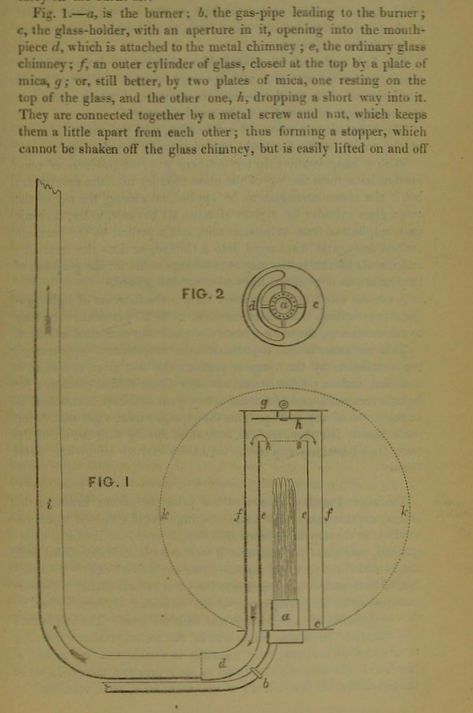 page from James’s Description. You can read the whole booklet here

A few years later, disaster struck when Robert drove his gig in Hampstead Road. The newspaper reports vary in the reason why he was thrown from the gig, hitting his head, and losing consciousness. One report said he hit a post, but another said the horse had bolted and one of the reins gave way when Faraday tried to regain control, overturning the gig. Whatever the cause, the unlucky man was taken to University College hospital, but the fracture in his skull was so severe that he died the next day. The verdict of the coroner was “accidental death” with no-one to blame, but the police were reprimanded for not acquainting the family of the injured man with his condition the moment he was brought to the hospital, despite the fact that a letter with his address had been found on him, but only thought to do so the next day.(3) 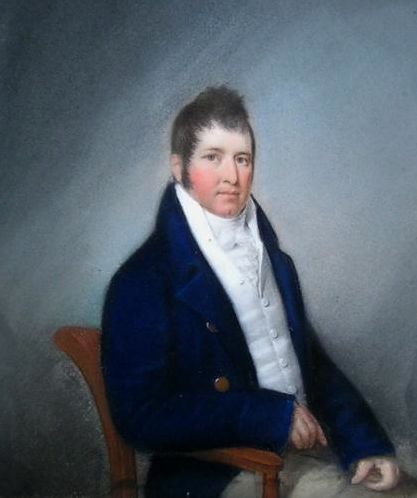 After his father’s death, James continued the business in Wardour and after his own death in 1875, it was run by his son Harold.(4) The firm became known as Messrs. Faraday & Sons and secured some prestigious commissions, for instance from John Campbell, Lord Breadalbane. In 1834, he inherited Breadalbane House in Park Lane from his father, the 1st marquess of Breadalbane, and renovated parts of the interior to be in keeping with his idea of what an ancestral home should look like. Furniture was supplied by a friend of Pugin, Edward Hull, who ran a warehouse of antique furniture in Wardour Street. For a ball given in 1854, with Queen Victoria and the King of Portugal as guests, Breadalbane had a temporary hall erected, which was kitted out as a ‘Baronial Hall’ by John Gregory Grace. Faraday & Son were responsible for the “admirable mode of lighting”.(5)
The firm’s entries for the Electric Light Fittings Exhibition in Edinburgh received a favourable review in The Art Journal of August 1890; their designs were qualified as “of a novel and artistic character”, and the design of a Cupid holding a lamp aloft was given as an example of “a good design”. The Colonies and India newspaper of 9 April 1892 reported on another exhibition and said that “the admirable, sometimes severe, taste of Mr. Harold Faraday in artistic design is proverbial, and had never had more effective demonstration than in the fine display made by his firm at this exhibition. Mr. Faraday’s object … appears to be to differentiate electric-light fittings as far as possible from gas fittings. … Mr. Faraday’s designs have a distinction of their own”. In 1919, another company, specialising in chandeliers and Faraday’s merged to become Osler and Faraday Ltd, working from Wardour Street until 1925. They also had a showroom in Berners Street and various other cities in the UK. More on the history of the Osler company and how they ended up as part of Wilkinson’s PLC can be found here. 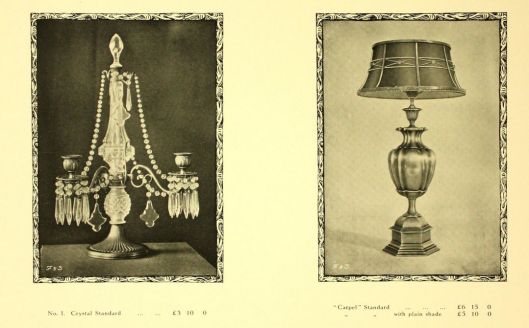 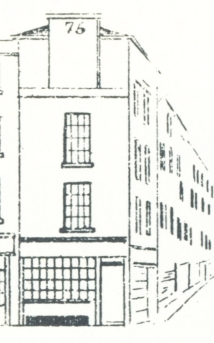 The Nettleton family had been on that particular corner when the road was still called Fleet Market, as in his will of 1825, father William’s address was given as 75 Fleet Market.(1) To be clear, the shop at number 75 was not a stall at the market, but a ‘proper’ building in the street behind the market stalls. In 1832, the record of the Sun Fire Office shows an entry for “Messrs Nettleton and Co., 75 Farringdon Street, tinmen and braziers”. Who exactly was in the business besides Thomas is unclear, perhaps a brother, but the 1841 census just shows Thomas and his family on the premises.

In 1814, at the baptism of Thomas, he and his parents William and Hannah lived at 9, Tash Court.(2) Tax records for Farringdon Without in 1819 place William Nettleton at the west side of Fleet Market. Two years later, in August 1821, William obtains the freedom of the Tinplate Workers Company by redemption, paying 46s 8p for the privilege. In early 1822 he is admitted to the freedom of the City, but does not enjoy it for very long as he is buried on 17 April 1825 at St. Bride’s. Curiously, his address is then given as Stonecutter Street. His son Thomas is not admitted into a City Company until 1841 when he receives his freedom from the Worshipful Company of Founders “by servitude”.

If we look more closely at the census records, we find Thomas and his wife Mary at number 75 as well as a 6-year old girl Jane Jones. Unfortunately, the 1841 census does not yet provide family relation details, so it is unclear who the little girl was. Thomas and Mary (Ann) Fox were married on 27 April, 1834 at All Hallows, Lombard Street. Ten years later, at the next census, Thomas appears to have moved to 30 Stonecutter Street, but looking at Horwood’s map of 1799, I think it is just the other address for what was essentially the corner building. 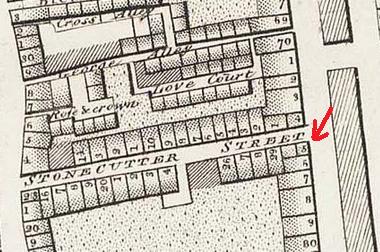 In 1851, Thomas is employing two men, one apprentice and one boy. Thomas is living with his wife Mary Ann, Hannah Self, his mother-in-law, and James Tyrell, the apprentice; there do not seem to be any children. In the 1833 tax records for Farringdon Without, one John Self, leather seller is found below the entry for Nettleton. And in 1829 John Self, a widower, marries Hannah Nettleton, a widow at All Hallows. I assume that Hannah Self was previously married to a Mr. Fox, hence the last name of Mary Ann, but have found no record of such a marriage. Also living at 30 Stonecutter Street are William Langton, fruit salesman, his wife Mary and daughter Mary Ann. Presumably they rent part of the building.(3) In 1861, Thomas and Mary Ann, one apprentice, John Coucher, and one servant, Emma Fox (is she a relation of Mary Ann?) are resident above the shop. Mary Ann dies in January 1864 and is buried at St. James, in Swain’s Lane, or Highgate Cemetery as we would now say.

Thomas remarries and in 1871 he is found at 30 Stonecutter Street with his second wife Emma (was she previously the servant Emma Fox?), and employing three men and one boy. They are still there in 1881, but what happened to them after that is unclear, they may have moved away or died, but I have not been able to find any records to either possibility.