John Joseph Mechi (1802-1880) was the son of Giacomo Mechi from Bologna, Italy, who set up business as a cutler in the 1820s at 130 Leadenhall Street. When business went well, he moved to larger premises at 4 Leadenhall Street where he proudly announced his invention of the ‘magic’ razor strop on the Street View elevation. This last address is mentioned as Mechi’s in the Electoral Register for 1834.

He did not just stick with the traditional cutler’s wares, but branched out into dressing cases, chess boards, small tables, portable desks, and lots of similar goods. Some of the boxes and cases he supplied still come up in auctions and antique sales. His frequent advertisements were always verbose, listing as many trade goods as he could possibly fit in the allotted space. A good example is the page-long advertisement in Hammond’s List of London and Provincial Newspapers of 1850. 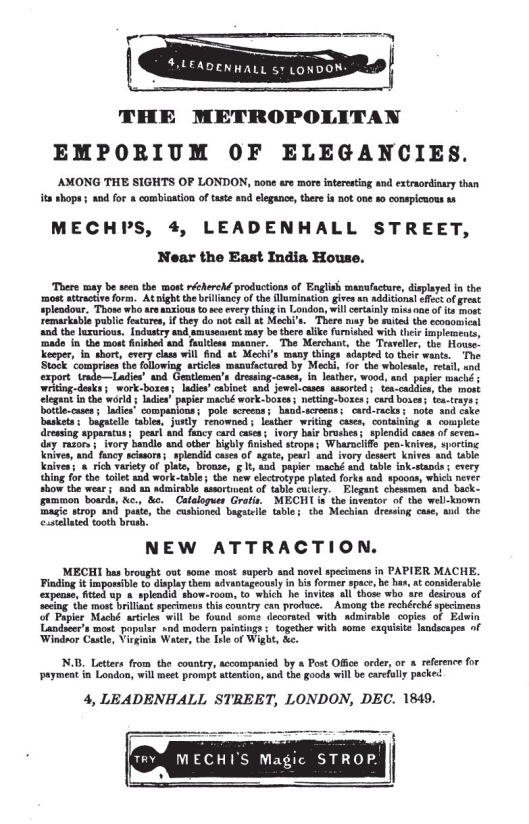 Advertisement in Hammond’s List of London and Provincial Newspapers 1850 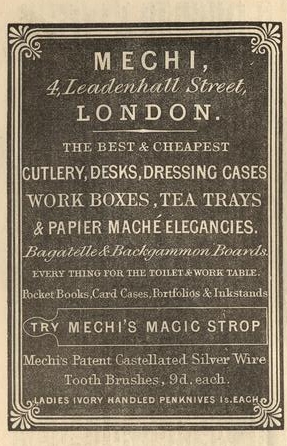 A slightly more subdued one is the advertisement he put in one of Dickens’s books by instalments, but even here he cannot refrain from listing the items available. Sometimes his advertisements were concerned with just one item, but then he would describe them in great detail as in the case of an advert for dressing cases in Notes and Queries of 25 January, 1851 where he states that “In no article perhaps is caution more necessary than in the purchase of a Dressing Case, for in none are the meretricious arts of the unprincipled manufacturer more frequently displayed. MECHI, 4. LEADENHALL STREET, near Gracechurch Street, has long enjoyed the reputation of producing a Dressing Case in the most finished and faultless manner. Those who purchase of him will be sure of having thoroughly-seasoned and well-prepared wood or leather, with the fittings of first-rate quality. The prices range from 1l. to 100l. Thus the man of fortune and he of moderate means may alike be suited, while the traveller will find the Mechian Dressing Case especially adapted to his necessities”. 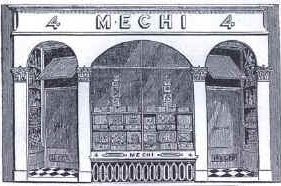 In 1851, Mechi exhibited at the Great Exhibition and as he announces in the Notes and Queries of 24 May 1851, he could be found in the gallery at the north-east corner of the transept. Totally in character, he could not refrain from adding a P.S.: “In order to afford room for the great accession of Stock which Mechi has provided to meet the demand consequent upon the anticipated influx of visitors to London during this season, he has fitted up an additional Show Room of great splendour, and made other improvements, to which he earnestly invites public attention.” He also acted as juror of the 1851 Exhibition and of the Paris Exhibition of 1855. 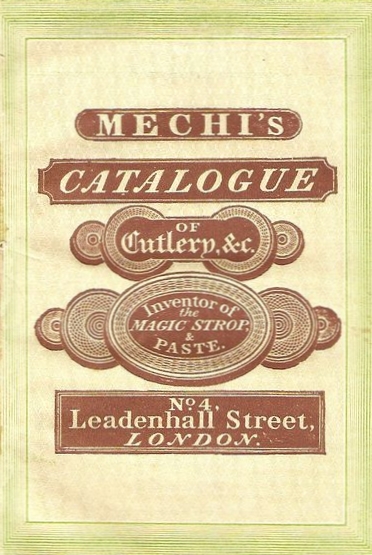 From time to time, he also brought out a catalogue with pages and pages of items he could supply. You can see one full-text here and another one here. In 1859 he promoted his manager Charles Bazin to partner and expanded the business to 112 Regent Street. That is also the address were Bazin and his family were registered as living at the time of the 1861 census. Unfortunately, Charles Bazin died in 1865 (not in 1869 as is sometimes alleged) and Mechi had to take sole responsibility again.(1) We do indeed see Mechi and his second wife Charlotte residing at the Regent Street address in the 1871 census. Their children Isabella, Joseph and Florence are then living at Triptree-Hall, Tollesbury, Essex, a farm that Mechi had purchased in the early 1840s and on which he experimented with new farming methods.(2) The Gardeners’ Chronicle makes frequent mention of talks, demonstrations and books, all by Mechi. Mr. Mechi’s Farm Balance-Sheets; also, His Lectures and Papers on farming since the publication of his former book was published in 1867 (see here). He also gave a lecture on how to ensure success in trade which was published in 1850 (see here). He stressed that customers had to be treated well, or in his words “with the utmost latitude of liberality” (p. 8). Even if they are wrong, they are right and you might as well take a small loss if that means the customer is satisfied with the service and will not only come back to you, but will also tell his friends about it. 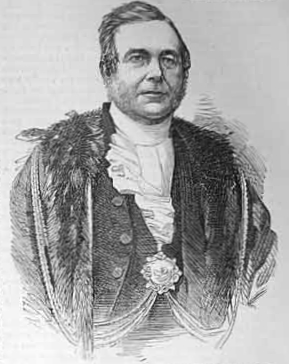 Mechi’s flair for business enabled him to live the life of a gentleman-farmer, frequently sojourning into the limelight with new farming practices. He became Alderman in the Ward of Lime Street and magistrate for Middlesex and founded a charity to support farmers. In 1860, the premises in Regent Street were used for the inaugural meeting of the Agricultural Benevolent Institution, a charity that still exists, and which had – and has – as its purpose “to secure a home for, or pension to, the bona fide farmer, or widow of a farmer and to maintain and educate the orphan children of farmers.”(3)

At the end of his life, things did not go as well as before. The failure of the Unity Joint Stock Bank and an unfortunate commitment with the Unity Fire and General Life Insurance Company, combined with the growing fashion for beards which markedly diminished the magic razor strop appeal and the bad farming years in the late 1870s all contributed to a gradual decline of his fortunes. He died on Boxing Day 1880, just 12 days after the liquidation of his affairs.(4) In an obituary he was referred to as the “well-known agriculturist” and it was said that “although Mr. Mechi had attained a good old age, there appears to be no doubt that his death was immediately caused by the misfortunes that overtook him at the end of his useful career”.(5) Although he died at Tiptree, his last address was given as 439 Strand and that is also the address where Isabella and Florence are found at the time of the 1881 census. Their mother Charlotte is then still residing at the farm with Joseph and Alice. 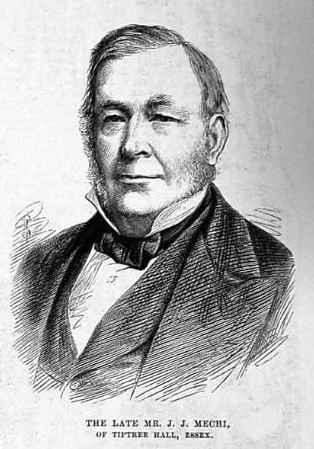