In 1847, in the third Supplement to Tallis’s Street Views, we find the ‘Antique and modern lace warehouse’ of Miss Clarke on the corner of Beak Street and Regent Street. She has succeeded William Vickery, a dealer in glass, who occupied the corner shop when the first series of Street Views came out. Miss Clarke is already present in the 1841 census for Regent Street, but as that does not show any house numbers and the scan is a bit vague, it is a bit difficult to determine whether she was already at number 154, but she was certainly in the area. Where she came from is a bit of a mystery. There is a notice in The London Gazette of 27 April 1827 that one Jane Clarke, “formerly of Wellington, Somersetshire, and late of No. 42, Brook’s-Mews, Berkley-Square, Middlesex, Milliner and Straw Bonnet-Maker” had gone bankrupt, but whether these two Janes are the same or related is unclear.

An 1849 advertisement in The Morning Post mentions ‘British moire antiques’ as being sold by Miss Clarke, both at 154, Regent Street and at 79, Bold Street, Liverpool. Expansion indeed. In 1851, the census mentions her living at number 170 Regent Street and with her some 30 unmarried ladies with job descriptions ranging from assistant to milliner and servant. And amongst all these women, just one man, 24-year old George Getbars. No indication as to his role other than servant.

Jane also expanded her lace emporium into Manchester, but that was one step too far. In 1854 she had to sell the establishment at 80 Mosley Street by auction and with it her “stock of foreign and English silk mercery, &c. including a magnificent display of long and square shawls of French, Austrian, Persian, Indian, Turkish manufacture …”. The list of what was auctioned went on and on, see the illustration.(2)

And there were more problems. In 1857, Colonel William Petrie Waugh was examined at the Bankruptcy Court and as part of the exhibits, a milliner’s bill from Miss Clarke was reported in the newspaper to be £2745 in total of which only £900 had been paid. Most of the articles bought had been for the daughter by a previous husband of Mrs Waugh on the occasion of the daughter’s marriage to Sir Pigot and ranged from handkerchiefs to veils and from bonnets to any number of dresses. As Mrs Waugh only had a settlement of £600 a year from her former husband, the likelihood is that poor Colonel Waugh had to fork out the rest. Add to that the other outstanding bills for jewellery and boxes at various theatres, and it is not surprising that the Colonel had himself excused from attending the Court by “an affidavit from a continental physician” which caused some of those attending the case to “burst into an audible titter”.(3)

And then in 1859, we suddenly find advertisements of one Madame Elise at 170, Regent Street, who will be showing the “choicest specimens of antique and modern laces, &c &c, selected from the stock of the late Miss Jane Clarke”.(4) It transpired that Miss Clarke had died suddenly at her house in St. Peter’s Square, Hammersmith, on the 28th of January, or, as Lloyd’s Weekly Newspaper would have it “the great creator of ‘Clarke’s Bonnets’ has made her last chapeau“. The newspaper remarks “how subtly she has fed the vanity of English women, and made Englishmen pay for the feast”. The reporter is obviously male and no admirer of women wanting only the latest fashion. He used phrases as ‘squander’, ‘shallow vanity’, ‘to cheat men into a false admiration’, ‘the satisfaction of out-dressing a neighbour’, and of course he reminds the reader of poor Colonel Waugh. Young women used to make their own clothes – he says – and now they have turned themselves into young ladies who want everything the shops have to offer. And even in death Miss Clarke set the fashion by directing in her will that she should be buried in point lace. On the other hand, he grudgingly admits, she left £80,000, bequeathing much of it to charities.(5) The reporter is a bit optimistic there as the probate record shows a value of £45,000, later resworn as £50,000(6), but still a sizeable fortune. 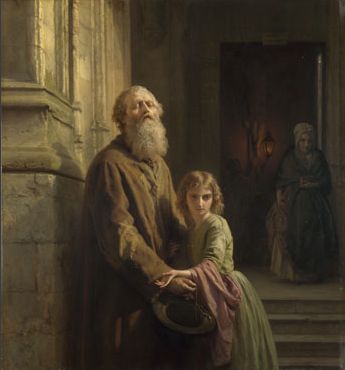 And she did not just leave money to charities; some of her worldly goods found a charitable new home, as can be seen in a notice of the new pictures that were placed in the National Gallery.(7) One of these paintings, “The Blind Beggar” by J.L. Dyckmans of Antwerp was received from the estate of Jane Clarke (see here for the NG’s page on the painting).

Madame Elise who took over 170 Regent Street was not, as Miss Clarke was, a single woman, but the wife of Frederick Isaacson and her name was not really Elise, but Elizabeth Marie Louise Jaeger. A very unfortunate death occurred at the premises in 1863 when a 20-year old seamstress, Mary Ann Walkley, died of apoplexy, brought on, or at least accelerated, by the long hours in overcrowded apartments and ill-ventilated bedrooms. It prompted the coroner to recommend new regulations for workroom and living conditions.(8) Apparently the women were housed in partitioned-off cubicles, two to a bed, with no ventilation and their working hours were long, sometimes right through to the following morning. You can read more about the appalling situation of dressmakers on Amanda Wilkinson’s blog here.

I’ll leave you with the first stanza of “The Song of the Shirt” (read the rest here).

With fingers weary and worn,
With eyelids heavy and red,
A woman sat, in unwomanly rags,
Plying her needle and thread —
Stitch! stitch! stitch!
In poverty, hunger, and dirt,
And still with a voice of dolorous pitch
She sang the “Song of the Shirt”.