Before 1858 and the Dentists Act, more or less anyone could claim to be a dentist and that is what Nevill Daniell did. At the time, there was no dental school and although Daniell may have had some training in dentistry and/or surgery, I have not found any evidence. In Tallis’s Street View, he is listed simply as ‘dentist’, but in an 1839 newspaper advertisement he calls himself ‘surgeon-dentist’ and urges his patients to take up the privileges that their annual subscription fee allows them.(1) Subscription customers were entitled to “professional advice and assistance whenever requisite throughout the year”. In 1841, Daniell has an advertisement in The Patriot in which he “invites attention to his peculiar method of treating and supplying teeth” and in which he claims that “practical knowledge with every branch pertaining to the profession of surgical and mechanical dentist, enables him to produce results which the mere theorist cannot effect”.(2) That certainly sounds as if he did not have any formal theoretical background to dentistry.

Competition was fierce and of course those with formal medical training looked down upon the mere mechanic. In 1839, John Gray, himself a dentist, wrote a lengthy piece in The Mechanic’s Magazine which begins thus:

As it is evident that only a duly qualified surgeon is competent to act as a surgeon dentist, and that an experienced practical mechanic, only, can succeed as a mechanical dentist, so it is equally dishonest for a mere surgeon to assume the mechanical department, as for the mechanic to play the quack in the surgical department; indeed there is a much greater distinction between them than is commonly supposed.

He also is of the opinion that mechanical skills can best be acquired before the age of 20 as later in life one can no longer acquire the dexterity, while the knowledge of surgery should only be taught to those older than 20 as that study required “much more serious thought and riper judgement“. In other words, a mechanic may become a surgeon, but a surgeon can never become a good mechanic. And a mechanic who has added the qualification of surgeon to his accomplishments may “legitimately assume the whole range of the profession of a dentist with credit to himself and advantage to his patients”. Mechanical dentistry, according to Gray, is comparable to watch making in its “exquisite execution of minute parts” and the “mechanical dexterity of a clever workman as a clock and watchmaker is requisite for, and can be applied to, the making of artificial teeth”. “Although the making of artificial teeth has been, hitherto, (with very few exceptions) carried on as a trade by rapacious pretenders, yet it is not a trade, but an art of a high order”. He goes on to describe the ideal education for a boy – no girl of course – who wants to become a dentist. If the educational path he proposes is followed, the young man will be ready to become a member of the College at the age of twenty-five. I very much doubt that Gray would have approved of Daniell who was only twenty-four when the advertisement mentioned above appeared in the paper in which he mentions the annual subscriptions, suggesting that he had already been practicing his dentistry for at least a year. (3)

In 1839, Daniell had his practice at 13 Wigmore Street, a house he shared with Humphrey Hopper, a sculptor, and we still find him at that address in the 1841 census, but in 1843 he must have moved to 15 Charlotte Street, Fitzroy Square. In a notice that he publishes in the London Gazette of 10 May 1844, he says that he has lived there “for twelve months past”. The notice is to tell the public that he intends “to present a Petition to the Court of Bankruptcy, praying to be examined touching my debts, estate, and effects, and to be protected from all process”. He is ordered to appear before the Court on the 10th of July and his creditors are to come forward before that date.(4) It seemed a bit of bluff on Daniell’s part not to wait for the proceedings to be brought by a creditor and it may have proved a sensible move, but only to postpone and not to avert bankruptcy as in 1852 he is in the Debtor’s Prison as an insolvent debtor. The notice to announce that the prisoner was to be brought before the Court lists his recent addresses and the list is long. He is “formerly of Albert-terrace, Westbourne Green, Paddington, Middlesex, afterwards of Regency-square, Brighton, Sussex, then of High-street, Bloomsbury, Middlesex aforesaid, then of Romford, Essex, then of Francis-street, Tottenham Court-road, and late of Upper Gordon-street, Euston-square, both in Middle-sex aforesaid, during a part of the time of No. 48, Gower-street, Middlesex aforesaid, and Bishop Stortford, Hertfordshire”.(5) As we know he had at least two addresses before that, which would indicate a move almost twice a year. I do not think that Mr. Daniell was a very good dentist. Either that, or he was a very bad businessman. 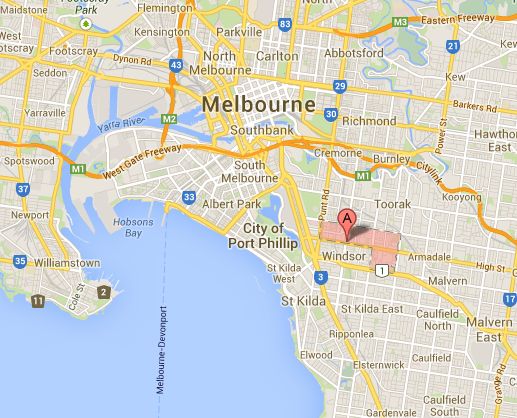 Map of Melbourne with Port Phillip and Prahran indicated by the marker (Source: Google Maps)

On the 29th of November, 1852, however, he, his wife Luciana whom he had married in 1840, and his five children (Grace, aged 8, Fanny, aged 6, Margaret aged 4, Gertrude aged 2 and Walter aged 1) boarded the Medway to Australia. The Medway, built in Scarborough in 1845, was owned by Tindall & Co. and under the command of captain Abel Mackwood. Tindall & Co were shipbuilders, shipowners and merchants of Scarborough and London, but they also had their own tea and coffee plantations in Sri Lanka, cleverly combining passengers with their own cargo on the voyage home. The Australian newspaper’s announcement of the arrival on 13 March, 1853, of the Medway in Port Phillip lists the passengers in the cabin class individually, but lumps the ninety passengers in the intermediate and steerage class together without naming them, so we do not know if the Daniells travelled in some comfort, but I somehow doubt it.(6)
Did Daniell intend to continue his dentist activities in the colony, or had he envisaged a totally new future? We do not know and unfortunately, the Daniells were not to enjoy life in Australia for very long; Neville died on 1 July 1854 in Prahran, now a suburb of Melbourne, only 39 years old of “rapid consumption”. His wife Luciana died a few years later. A notice in The Argus of 7 October, 1856, asks anyone with a claim on her estate to come forward. And so ended the all too short life of a mechanical dentist of London.

For a later occupant of 13 Wigmore Street, see here.