Alderson’s shop was just a bit further on from that of Charles Snelling, perfumer and hair dresser, at number 13. The houses were very similar, but Alderson’s did not have the columns and architrave that Snelling’s property had. For the position of the house in what is now Borough High Street, see the post on Snelling. The Aldersons had not always been at number 13, as Kent’s Directory of 1823 testifies. In that year, William Alderson, tailor and draper, can be found at 313 Borough and 5 Piccadilly. 313 Borough is, according to Horwood’s 1799 map, closer to London Bridge than 13 Wellington Street. Although the name of William Alderson is mentioned in Kent’s Directory, it was no longer William himself who ran the business as he had died in July 1816.(1) The Alderson’s shop had been at number 313 since at least 1808 when William’s name can be found in the land tax records. The land on which the house stood was the property of St. Thomas’s Hospital. 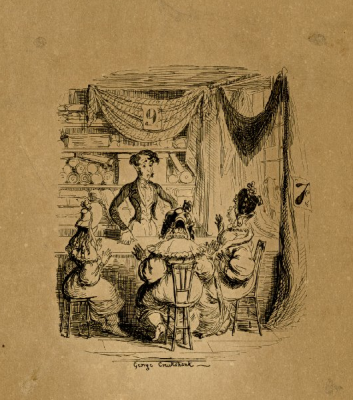 In his will(2), William leaves various sums of money to his widow Martha and his sons George, John, Robert, William and Thomas and his daughter Martha, but George and John are singled out to continue the business if they so wish; if not, the shops were to be sold and the proceeds divided. George and John were the two eldest sons, so it is perhaps logical that they were assumed to be the ones to carry on the tailor’s business. The younger sons and daughter were well provided for financially, but were not considered as the heirs to the business. At what point George and John sold the shops is not exactly clear, but it must have been between 1825 (Pigot’s Directory) and 1829 as in the Post Office Directory of 1829, George could be found at 47 Tooley Street as tailor and John at 110 Blackman Street as linen-draper [Update: no, wrong, that is another John, see comment by David Williams] Also in 1829, St. Thomas’s Hospital released the houses at 312 and 313 High Street to the Major of London, most likely in connection with the widening of the street and the building of Rennie’s new London Bridge.(3)

George must have moved again as he was later to be found at 13 Wellington Street, not just in the Tallis Street View, but also in Pigot’s Directory of 1839. In this directory he is listed as a tailor but with a * in front of his name to indicate that he was also a draper. His father’s will did not only give George a share in the business, but also three freehold houses at Barnard Castle, Durham. And this is were this story links to an email I had about an Edmund Alderson who died at Queen’s Row, Pentonville, and left bequests to his two brothers in the Yorkshire Dales. Unfortunately, I cannot link the Alderson tailors on the south side of the Thames to an Edmund, but according to my correspondent, there is a group of family history people looking into the Aldersons from the north of England with links to London, so perhaps one day ….
George Alderson, the tailor, was baptised at Barnard Castle on 20 October 1780 as the son of William and Martha. From the 1841 census we know that George married an Ann, and a possible candidate is Ann Horker (or Harkes). That marriage was conducted in April 1807 at St. Giles, Cripplegate. One of the witnesses was Martha Alderson which could either be George’s mother or his sister. In 1810, a daughter Ann is baptised at St. Saviour’s and father George is clearly given the occupation of tailor, so we know that he is the correct George. The next child, William Aeneas, is baptised at St. James, Piccadilly on 8 March 1813 which suggests that George was running his father’s shop at Piccadilly at that time, but in 1817, when son George junior is baptised, he is back in Southwark, apparently never to leave it again.

Top part of George’s will as recorded in the Prerogative Court of Canterbury; probate was granted to Ann in April 1851

William Aeneas dies in February 1850 and father George in December 1850, 71 years old. In his very short will he leaves everything to his wife whom he also names as the sole executor.(4) It is a pity that he did not specify a few bequests as we might have found out whether he still had property in Barnard Castle, but alas. The 1851 Post Office Directory still mentions George & Son at 13 Wellington Street, but the 1851 census shows widow Ann there as woollen draper with daughter Eliza. The 1851 census also tells us that Ann was born in Barnard Castle, just as her husband had been. Mother and daughter must have kept the shop going throughout the 1850s as the name of G. Alderson can be found in the land tax records until 1862, but in 1863, the tax records suddenly show a big cross drawn across the page. The record for 1864 explains why; the Charing Cross Railway Company had bought up all the land in the area in order to be able to build the viaduct over the High Street which was to take their railway from London Bridge to Charing Cross and Cannon Street. And that is as far as I can take the history of the shop as the building disappeared under the viaduct and I have not been able to trace Ann and Eliza to their new home.

You may also like to read about Todd & Procter, cheesemongers, who also came from the Barnard Castle area (see comment below).