One post often leads to another in this blog and this one is no exception. The previous post was on John Colley of Bishopsgate Street of whom Charles Snelling was to learn his trade, but as we will see, this post in turn leads to yet another, but first some information on the address where Snelling could be found in the early part of his career. 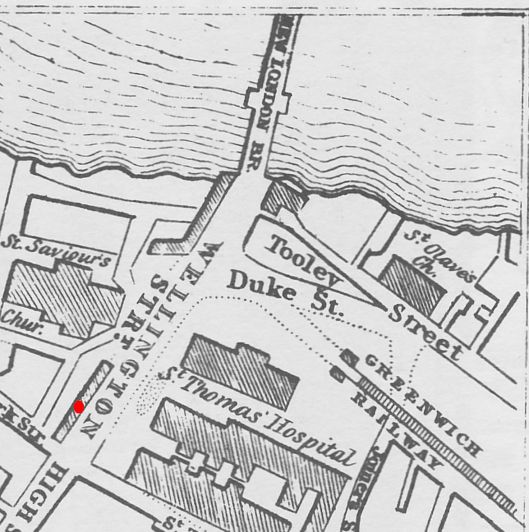 Section of the map Tallis provided with his Street View no. 45

Wellington Street was and is again part of Borough High Street, but the first section coming from London Bridge was called Wellington Street after the Duke of Wellington for a while (from somewhere in the 1830s to 1890 or thereabouts). Snelling’s shop was just beyond St. Saviour’s, in the middle of the row of houses between the church and York Street and opposite St. Thomas’s Hospital. In fact, slightly more towards the bridge from where the entrance to Borough Market now is.

As mentioned above, Charles Snelling served his apprenticeship with John Colley of Bishopsgate Street. Snelling’s indenture was dated 6 September 1825 and lists his father as Henry Snelling, barber. Henry paid Colley twenty pounds for the privilege of teaching his son the art of hairdressing and perfumery. Charles would have come to the end of his apprenticeship in 1832, but he did not take up the formal freedom of the City of London until 1841. No doubt because he had no need for it running his business on the south side of the Thames. At the end of 1833, the partnership between Henry and Charles Snelling was dissolved and Charles continued at 11 Wellington Street on his own.(1) In 1838, he married Louisa Knowles, the daughter of a naval officer.

Tallis only just caught Snelling in Wellington Street, because soon after the Street View booklet appeared, Charles moved to 20 Gracechurch Street where the 1841 census was to find him and his growing family. 1841 was also the year in which he obtained the freedom of the City of London, something he had no need for at his previous address, but did in Gracechurch Street as that street lies within the jurisdiction of the City. 20 Gracechurch Street had been the shop of Nathaniel Pryor, a jeweller, and after Pryor’s death, of his widow Elizabeth (blog post on them here). Charles continued to work in Gracechurch Street and the 1851 census, which was taken on 30 March, finds him there with a shopwoman [Postscript: when I wrote this post, I totally ignored her, but I should not have. See the comment by Melissa why Emma Whitehead should have been noticed] and a visitor, an accountant. Having this visitor, one Samuel Stockton, did not bode well for Snelling. It may, of course, have been an ordinary visit from a friend, but on the 23rd of April, a claim for bankruptcy was filed in the Court of Bankruptcy and Snelling was to appear before the Court on the 19th of May.(2) He was given a certificate of the second class, that is, Snelling had been careless or reckless, but not dishonest, and could partially have avoided bankruptcy, or so the Court of Bankruptcy ruled. Any idea of misfortune without blame was apparently not a valid reason. The last chance for creditors to stake their claim was on 17 January 1852 or they would forfeit any dividends.(3) And on the 11th of May, 1852, or on subsequent Tuesdays, the “creditors who have proved their debts […] may receive a First Dividend of 6d. in the pound” from Isaac Nicholson of 24 Basinghall Street, the offical assignee.(4) No more is written about Charles in The London Gazette, but let’s assume he survived the bankruptcy proceedings and continued to work as a hairdresser and perfumer, although I have not discovered anything about him after 1852.

And what happened at Snelling’s old address in Wellington Street? Briefly, George Philcox, a clock and watch maker, was listed at the address, but already on 2 March 1841, he was insolvent and in Surrey Goal. Next come Batchelor and Rogers, drapers, who are mentioned in Robson’s Directory of 1842. Henry Batchelor and James Baker Rogers, mercers, linen drapers and haberdashers, dissolve their partnership on 14 July 1843. And there was a reason for breaking up the partnership. Just two days earlier, they had assigned all their “stock in trade, bills of exchange and promissory notes, and other securities for money, book and other debts, books of account, and all other the estates, moneys, property and effects, wheresoever and whatsoever (except leasehold estates) … for the benefit of the creditors”.(5) I am afraid that 11 Wellington Street figured prominently in the bankruptcy notices in The London Gazette.