Tallis gives the name of Geddes as the proprietor for Catherine Wheel Inn. The index to the Street View booklet does not give a house number for the inn, but as it is between numbers 39 and 41, rocket science is not involved to deduce that it must be number 40. And indeed, above the elevation, number 40 is duly written. As you can see from the picture at the top of this post, at ground level an enormous entrance gate was situated as wide as the whole building, with two floors above it. Nowadays, there is a Catherine Wheel Alley, which you might assume is the remnant of the Geddes entrance, but that is not quite true. For one, the small alley would not be able to take the width of the waggons that no doubt were used to transport goods and passengers to and from the inn. But the small alley did lead to the same substantial inn yard as the thoroughfare at number 40 did. From the east side of the yard, Catherine Wheel Alley led all the way to Petticoat Lane (nowadays Sandy’s Row), but these days, it runs to Middlesex Street. On the 1893-95 Ordnance Survey map you can see that houses have been removed to make way for the new Middlesex Street section, And, at the other end, roughly where number 40 was, is now Victoria Avenue. The maps below should make the changes clear. The blue arrow points towards the small alley entrance that is still there and the red arrow to Mr. Geddes’s inn entrance. 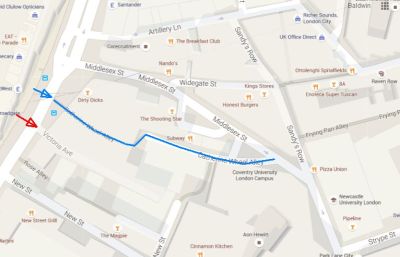 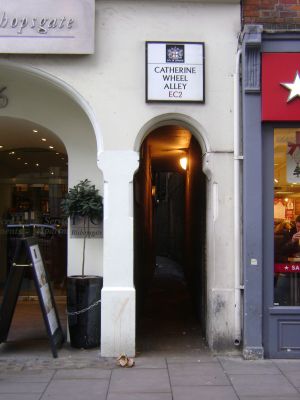 The ‘blue’ entrance to the alley

Right! Having explained the geographical situation, we can go back to Mr. Geddes and the Catherine Wheel Inn. Once upon a time, there was probably one Catherine Wheel Inn in Bishopsgate Street, on the east side of the street, that is the one this post is about, but at some point in time another one was built across the street, predictably called the New Catherine Wheel Inn, and hence the first one became the Old Catherine Wheel Inn. If the name was the only similarity, everything would have been fine, but unfortunately, the Sykes family managed to get their business hands on both inns and to make matters worse, the adjectives New and Old were not always used to differentiate between the two inns. It caused no end of confusion when I was writing the post for William Sykes who had his waggon office at the New Catherine Wheel Inn, not to mention the fact that the Sykes family had a limited fantasy when it came to naming their sons as they all seemed to be called William, Richard or John.

Anyway, in 1797 William and John Sykes, innholders, insure the Old Catherine Wheel Inn with the Sun Fire Office. They had inherited the inn jointly from their father Richard. In 1805, however, the partnership of “seedholders and innkeepers” was dissolved with John to carry on the business at the Catherine Wheel Inn and William to continue as seed factor at the New Seed Exchange in Mark Lane and in White Lion Street, Spital Square.(1) In 1810, bankruptcy proceeding were started against William, but he managed to continue trading for a number of years.(2) The 1814 Post Office Directory lists Wm. Sykes & Co. as seed and hop factors at White Lion Street, but luck was not on William’s side and in 1815 he and his partner Thomas Shackleton, were again declared bankrupt.(3) In the mean time, John continued to run the inn until his death in 1811. He leaves his part of the inn to his wife Ann “until my son John arrives at the age of twenty one years”. He leaves his house to his wife Ann and if she dies before the expiration of the lease, his sons John and William are to have it jointly.(4) Note the difference between the house and the inn. An Old Bailey case of 1814 concerning some stolen butter shows son John and his mother Ann running the inn as partners.(5)

So far so good, but then we come to an insurance record of 1819 where one Joseph Burton, victualler, insures the Catherine Wheel Inn in Catherine Wheel Alley (so this must be the Old Catherine Wheel Inn). He is still there in 1821 and I gather that the Sykes left the day-to-day running of the inn to Burton while hanging on to the lease. Ann Sykes dies in 1821 and in her will she specifies her “interest in the lease of the Catherine Wheel Inn Bishopsgate”, leaving it to her four daughters.(6) In 1823, the Land Tax records show William Sykes paying “for house and yard” in the alley, but from an April 1827 advertisement in The Champion and Weekly Herald we learn that John Geddes is running the inn as small parcels can be left with him for C. Wilson’s Steam Packet Messenger to Sheerness. I would suggest that the same applied as in the case of Burton and Sykes; Sykes held the lease and Geddes ran the inn. However, an 1829 insurance is taken out for the Old Catherine Wheel Inn by William Walter, victualler, so how that fits together is unclear. And Thomas F. Dibdin quotes a poem of 1811 by one John Horseman in which yet another name is mentioned for the parcel office:

If books you'll lend me, then your card
Direct in this way, 'By George Ward,
Catherine Wheel, Bishopsgate Street;'
His cart is sure, though not so fleet:
And in a box, or in a sack,
Whate'er you lend, I'll send safe back.(7)

The 1840 Land Tax record still shows Sykes with “house & stabling” in the yard. The 1842 Robson’s Directory may hold – at least part of – the answer as they clearly mention Wm. Sykes, waggon office, 40 Bishopsgate. Can we assume that Sykes ran the waggon service at number 40 and that someone else ran the inn? Yes, judging by the various names found as proprietors of the inn, that is what must be the case. John Geddes is once again listed as the proprietor of the Old Catherine Wheel Inn in the 1843 Post Office Directory. This still does not explain why William Walter insured the inn in 1829, though, but at least Geddes was around at the time when Tallis produced his Street View booklet. In the 1851 census, Geddes is listed as wine merchant which may explain why one Mr. (John) Lewis is mentioned as the landlord of the Catherine Wheel public house in Catherine Wheel Alley in a newspaper report of 1847 where he was portrayed as the victim of a revenge attack by a former lover.(8) Did Geddes concentrate on the wine business and did he leave the running of the inn to others? Probably; the listing of other names cannot be readily explained in any other way. In other words, we have to distinguish between the lease of the building (Sykes), the inn (various proprietors, first Sykes, later others, among whom Geddes), and the waggon office (Ward and later Sykes).

Despite the fact that others took over the running of the inn, Geddes did not disappear from the scene completely. The 1871 census still shows him at number 40, but that same year, an advertisement announces the sale of Geddes’s stock of bottled wine from his cellars at 182 Bishopsgate Street and in Devonshire Street. The sale was necessitated by Geddes’s ill-health and he died on 4 March 1873. In the registry of the probate, he is still mentioned as “late of the Old Catherine Wheel Inn 40 Bishopsgate-street”, innkeeper and wine-merchant.(9) The inn itself continued as a galleried coaching inn until 1895 when it was partly destroyed by fire. It was pulled down completely in 1911. 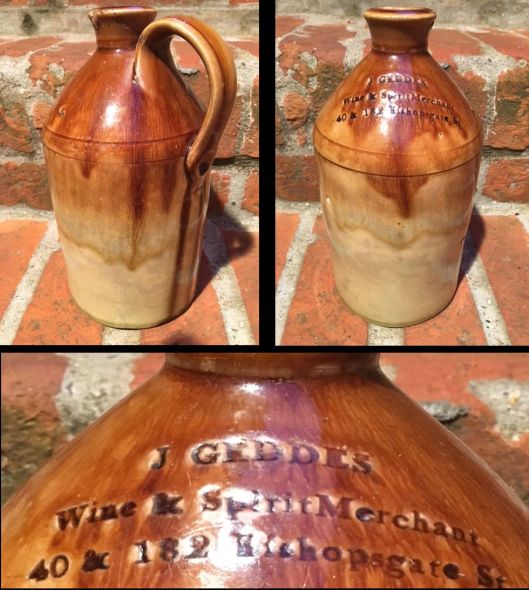 1/4 gallon slip-glazed flagon. Photos supplied by Jason Nash (see comments) for which my grateful thanks

5 thoughts on “John Geddes of the Catherine Wheel Inn”