When Westminster Bridge was envisaged and built, land had to be bought on the Surrey side for the approach road. Between 1740 and 1746, the Commissioners of Westminster Bridge bought land from the Archbishop of Canterbury and, in Lambeth Marsh, from the Lord Mayor and Commonalty of the City of London. In later years, land on either side of the road was sold or leased for building purposes.(1) One of the houses built there became the hatter’s shop of Charles Holwell. 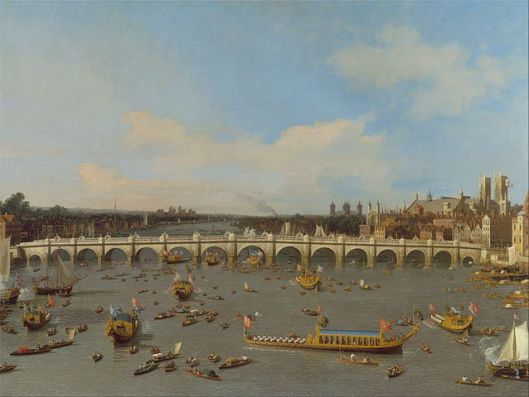 Canaletto, Westminster Bridge, with the Lord Mayor’s Procession on the Thames, 1746 (Source: Google Art Project via Wikipedia). More pictures of the early bridge on the Wikipedia page.

Although Holwell is listed in the index of Street View booklet 69, the depiction of the houses only goes as far as number 99. To see the façade of number 100, we have to turn to booklet 80 where it is shown as part of Coade’s Row. The Sun Fire Office registration for 21 May 1831 does refer to the hatter’s shop as being at 3 Coade’s Row, although that is – in the Tallis booklet at least – a property on the other side of the road. Church records for baptisms of the children are just as erratic. When the youngest son Charles junior is baptised in 1830, Charles senior and his wife Mary do not yet live in Bridge Road, but in Isabella Street.(2) With the next baptism in 1832 (John Bradford), they live on Westminster Bridge Road; in 1834 (Mary Ann) in Coades Row; and in 1837 (Thomas Bradford) and 1841 (Charlotte) on Bridge Road. None of the entries provides a house number, but let’s assume that Charles had his hat shop at 100 Westminster Bridge Road since at least 1832.

If we follow the census records, Charles sr. and Mary are at Bridge Street in 1841, but in 1851, Mary is listed as widow, ‘hat manufacturer’ with her son Charles as ‘hat maker’ (no idea if the difference between manufacturer and maker signified a difference in status, or whether it was just due to the vagaries of the census taker). Charles senior had died in June 1850 and was buried at Norwood Cemetery. Charles junior continued his father’s business and we see him as hatter in subsequent censuses. In 1853, he married Sophia Lemon and the couple had at least four children (Charles III, Sophia Margaret, James Thomas and Henry William), but as far as I can see, none of them became a hatter.

From 1861 onwards, the home and business addresses start to diverge as it did for so may Victorian shopkeepers. In the 1861 and 1871 censuses, we find the hatter and his family living at 6 Ouverture Terrace, Kennington; by 1881, they have moved to 74 Paradise Road. Nothing of spectacular interest happens to the hat shop, but in 1896, Charles’s claim to fame came about when he went into Westminster Hospital for an abscess in his neck. During the operation to open the abscess in order to remove whatever matter was inside, a rupture was discovered – or accidentally made? – in a vein causing profound bleeding. Fortunately, they managed to stop the bleeding and after a month in hospital, Charles was discharged. He lived to the ripe old age of 80, and only died in 1909. The operation was described in The Westminster Hospital Reports, ed. R.G. Hebb (1897), so medically-minded readers of this blog can read the whole procedure:

No advertisements for the hat shop nor any hats made by Holwell have turned up so far, so no nice illustration to go with this post, sorry about that. There is another Holwell listed in the Tallis Street Views, but since I have not found out who the parents of Charles senior the hatter are, nor where he was born (the 1841 census just says that he was not born in London), I cannot prove a link between the two families. There is a possibility that Charles is related to Edward, son of Edward Holwell, hat manufacturer of Exeter, who was apprenticed to George King, a vintner, in 1791, but genealogical proof is lacking so far.

A hat from the 1830s, nothing to do with Holwell, but since I have not found one with his name on, this anonymous one will have to do (Source: Victoria & Albert Museum Images)

(1) Survey of London, Volume 23, Lambeth: South Bank and Vauxhall, ed. Howard Roberts and Walter H Godfrey (London, 1951), pp. 69-74 via British History Online (here).
(2) There is an earlier insurance record for 1826 in which Charles Holwell, hatter, is paying the premium for 46 Orchard Street.