Tallis did not list the occupants of 309-317 Strand in the Street Views that came out in 1839. That section of the street was situated behind St. Mary-le-Strand and, for whatever reason, Tallis decided to depict the church rather than the shops behind it. You can just about see a small section of number 310 behind the church, but Peirce was not listed in the directory that came with the Street View. Tallis did make amends, however, in the 1847 Street Views and instead of the church he depicted the row of shops of which you can see number 310 at the top of this post.

In March 1829, Charles Ingrey and George Edward Madeley, lithographic printers, at 310 Strand dissolved their partnership.(1) Ingrey left us a nice trade card that depicts his lithographic printing office. The British Museum date the card to somewhere between 1824 and 1839.

trade card Charles Ingrey (© The Trustees of the British Museum)

The 1841 census tells us that James Randall, a collector of rents, and his family are occupying the premises, but so is George Peirce, printer, and his wife Susannah. At some point in time George had entered into a partnership with one Matthew Flinders Pearson of 7 Castle Street, Holborn, also a printer, but that partnership was dissolved in late 1842.(2) Peirce was to continue the business in the Strand on his own, although he later had another partnership with James Trevelyan Hyde which was dissolved in March 1848. The notice in the London Gazette stated that the firm of Peirce and Hyde had been working as booksellers, printers and publishers.(3) Once again, the business was to be continued by Peirce.

We can learn a bit more about the everyday practices in Peirce’s business and about the layout of his shop from an Old Bailey case of 1845. Charles Thomas Knight, described by Peirce as a pressman in his employ until 3 October, was indicted for stealing 900 sheets of printed paper from Peirce. Peirce said that he had printed Thomas Doubleday’s The True Law of Population and that he kept some of the print run in loose sheets in the store room. He had sold some of the work bound, but none unbound. He saw some of the sheets at Mr. Durien’s, an oil and colourman, who had bought the sheets from George Eaton, a bookseller. Scrap paper, printed or otherwise, was used to wrap any kind of produce in, so there was a ready market for waste paper among the shopkeepers and young Knight seems to have made use of that demand. He pilfered the sheets from Peirce’s warehouse, no doubt given a helping hand by his brother who still worked for Peirce. The unfortunate printer told the court that his business had two entrances, one in the Stand and one at the back leading into One Bell Yard. The latter entrance was the one the workmen were supposed to use. Knight was sentences to nine months confinement.(4) 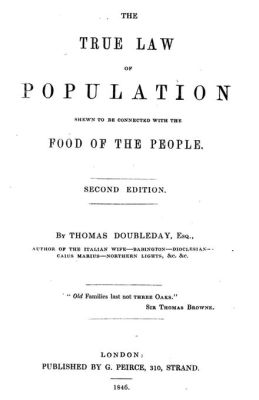 Another book that Peirce printed was William Cobbett‘s Rural Rides in the Counties of 1853. A letter from Peirce to J.P. Cobbett contains the bill for printing 1000 copies of Rural Rides, which was not published by Peirce as he had done the edition by Doubleday, but by A. Cobbett of 137 Strand. J.P. Cobbett was the editor, so apparently a regular family edition. The invoice by Peirce can be found in the archives of the Museum of Farnham (see here).(5)

Peirce’s wife Susannah died in January 1857 and was buried the 22nd of that month at All Souls, Kensal Green, and George was to follow her exactly one year later as he was buried there on the 22nd of January 1858. His will was proved by his brother, Thomas Henry Peirce, an ironmonger.(6) In October 1858, the “materials of the newspaper and jobbing printing office of Mr. G. Pierce [sic] was sold by auction.(7) Thomas tried to dispose of the lease of 310 Strand (see advertisement below), but he continued to pay the Land Tax up to 1863. In 1864 a William Ponsford took over.

Nothing is now left of 310 Strand as the developments for Kingsway completely obliterated the row of houses behind St. Mary le Strand and where Peirce’s business once was, you can now find a gate between two buildings that – I think – belong to King’s college. And if you position yourself on the other side of the street – roughly at the bus stop in front of King’s College – you will have the same view as Tallis depicted in his 1847 Street View. 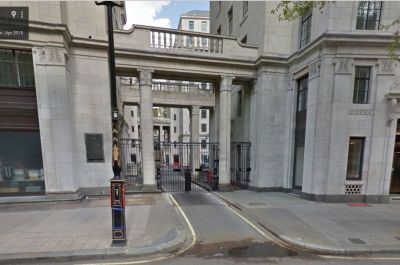 The gate where 310 Strand was situated (Source: Google maps)