The establishment of Whisson and Collis(s), the Two Ships, was situated on the corner of Princes Street and Old Compton Street and as both streets were depicted by Tallis, the pub was favoured by an appearance in two of Tallis’s booklets. The elevation on the left is the one in Princes Street and the one on the right in Compton Street. The property was later known as 54 Wardour Street. John Colliss had been running the Old George at 29 Oxford Street together with James Whisson, at least since 1834 when that address is mentioned on the baptism record of his daughter Susan (All Soul’s, Langham, Westminster). Before that, the Colliss family had lived at South Bersted, Sussex and it was there that John Colliss was married in 1822 to Martha Catchlove. One of the witnesses of that marriage was James Whisson, presumably the same James Whisson who later became Colliss’s partner in London. At least six Colliss children were baptised at South Bersted, two were to follow at Langham, two at St. Anne Soho when John ran the pub in Princes/Compton Street and two more afterwards when he had moved to Newington Causeway.(1)

Pigot’s Directory for 1839 lists Colliss with James Whisson at the Old George in Oxford Street, but also with Whisson (no first name given) at the Two Ships. Colliss had, however, already moved from Oxford Street to Old Compton Street sometime between July 1836, when Charlotte was baptised at All Souls, and early 1838 when his daughter Mary was baptised at St. Anne Soho. The 1841 census found John and Martha Colliss and three of their children at 27 Old Compton Street. In 1851, the couple, and eight of their children, are found at 59 Newington Causeway and this was the address of the World’s End, the pub we have already come across in Tallis’s Street View as ran by Marc Elphick who went bankrupt in 1841. A picture of the World’s End can be found in the post on Elphick. The 1843 Post Office Directory does not list Colliss, but as his youngest son was baptised at Holy Trinity, Newington Causeway in May 1844 (born August 1843), we can assume that Colliss was already running the World’s End by then. It certainly means that he did not stay very long at the Two Ships; he arrived there in ±1837 and left ±1842/3 (Colliss and Whisson are still mentioned as the proprietors of the Two Ships in Robson’s 1842 Directory). Whisson was likewise just passing through. 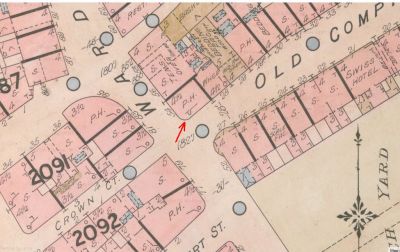 Although it seems logical that the Whisson who ran the Two Ships with Colliss was James Whisson, as they had ran the Old George in Oxford Street together, it may just as well have been Nathaniel Whisson, who was probably a relation of James. Nathaniel is also listed as a victualler, and at more or less the same time as Colliss co-ran the Two Ships, James Whisson ran the One Tun in Goodge Street and Nathaniel the Crown & Anchor at Judd Place, so that does not help much. So far, I have unfortunately not found any records that mention the first name of the one who co-ran The Two Ships with Colliss.

In 1862, so well after Whisson and Colliss were there, The Two Ships figured in an Old Bailey case, because a wrestling match (or pub brawl if you prefer) that had started in the pub was continued outside with the result that one person died. The victim, John Radford, and the accused, William Davis, were fighting in the street and witnesses described the victim as at some point having fallen against the window of Peppin’s chemist shop. That fall did not kill him, but a later one against a kerb stone did. No one was sentenced for the death of the man; it was just a fight without intent to kill that went tragically wrong.(2) What surprised me, though, is that no mention is made of anyone from the chemist’s coming to the aid of the victim. A doctor from Dean Street testified that his assistant had seen to the victim and he himself had only seen the body two days after death, but apparently no immediate aid was given to the victim, or if it had, it did not make it into the statements of the witnesses.

If you look at Google Street View (their latest picture is from July 2016) for 27 Princes/Compton (which is now 54 Wardour Street) you can see a lot of scaffolding, but if you went back, for instance to May 2014, you can see how small 54 Wardour Street had become after 1913 when the building had been diminished by the widening of the street at the corner. The number 76 you see next door used to be 28 Old Compton Street and another property altogether. But big plans are afoot and Westminster Council has published documents to go with an application to enlarge the ground floor space at number 54 from 24 to 38 square metres by combining number 54 with 76 Old Compton Street. The whole plan is more complicated than this, but the picture below will explain what will happen at ground floor level. Wonder how it will look when the scaffolding is taken down again. 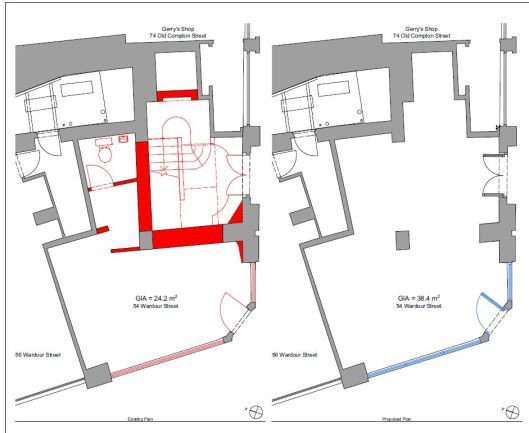