Charles Danieli originally came from Italy, but he was certainly in London by December 1819 when his two children Charles junior and Sophia were baptised at St. Marylebone’s. Charles senior and his wife, also Sophia, were to have several more children and the census of 1841 lists Sophia (22 years old), James (20), Frederick (15), William (15), Alfred (7), Cecilia (5) and Rosina (3). Charles junior, who is calling himself Charles George, or Carlo Georgio to emphasise his Italian roots, described himself as a jeweller and lived at 13 Little Titchfield Street with his wife Charlotte Emma Annis. At the same address (all properties in that stretch of Little Tichfield Street housed more than one family) lived Elizabeth Annis (65 years old), Mary Annis (35) and John Annis, plumber (30). They were undoubtedly Charlotte Emma’s mother and siblings as the will of her father John (he died in 1839) names his wife Elizabeth and his son John William, plumber, and gives the address of 13 Little Titchfield Street. Charles Danieli (whether it was senior or junior is not specified) was one of the people asked to confirm that the will was written in Annis’s handwriting.

But back to Charles senior at Oxford Street. Although he styled himself a jeweller, I do not think we should compare him with the ones one now finds in Hatton Garden. Read trinkets and household goods instead of jewellery and you are nearer the mark for Danieli. A number of Old Bailey reports on thefts from his shop tell us what kind of things he sold. In 1824, two looking glasses were stolen(1); in 1833, a tea-caddy(2); in 1835, a musical box, silver buttons, silver pencil-cases, a brooch, a hair-brush, knives and forks(3); in 1839, a looking-glass and frame(4); and in 1841, a work-box and some spoons.(5) What is also indicative of his status – or non-status if you prefer – as a jeweller, is that he is frequently described as a general salesman, even by his own son Frederick when he gave evidence in the 1839 Old Bailey case. And in 1841, when Charles became bankrupt, he is described in The London Gazette as “jeweller, dealer and chapman”.(6) Danieli ended up in the Debtor’s Prison for London and Middlesex(7), but he did not have to stay in there for very long, as a year later he is described as “assistent to Charles George Danieli […] jeweller, silversmith, cutler, and dealer in every kind of Birmingham and Sheffield Ware, and Furniture and General Dealer.(8)

The 1843 Post Office Directory does indeed lists Charles senior’s son Charles George at number 315 as jeweller and silversmith, but a few doors away, at number 304, another son, James, could be found as jeweller, silversmith and clock maker. James was not listed by Tallis at number 304; he gives various businesses at that number, among them one Thesher, a silversmith, and one Willey, a print seller. The jewellery trade was kept very much in the Danieli family, as on his marriage certificate (1842) Frederick is also described as a jeweller. When William gets married in 1844, he is given the occupation of watch-maker. The following year, Charles senior dies, just 56 years old; he is buried on 24 August 1845 at St. Marylebone’s. 315 Oxford Street was at some point taken over by the Royal College of Chemistry, although they must have erected a new building, judging by the picture shown below.(9) 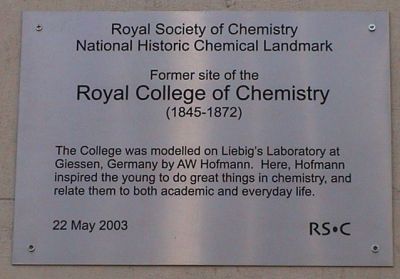 The 1851 census sees Charles George living in Islington as an artist with his wife Charlotte Emma and their children. The National Portrait Gallery tells us that an album of Charissima Emma Annis, 13 Little Titchfield Street, contains some leaflets concerning Charles George. It is not surprising that they ended up in the papers of the Annis family, considering they were Charles George’s family-in-law. His brother Frederick, by the way, married into the Reeves family which may explain an 1838 invoice that can also be found in the Annis papers for Danieli’s lessons in watercolours to a Miss G. Reeves. The leaflets produced by Charles George and found amongst the Annis papers, show that Danieli was trying to establish himself as a picture restorer in 1846.(10) In one leaflet Danieli says that he is only working for the trade and in another, smaller, leaflet he advertises himself thus:

Carlo Giorgio Danieli, restorer of old paintings after the Italian method, begs to inform those who possess pictures that have suffered by time or otherwise, that his mode of restoring is entirely different to that in general use in England, and far excels it both by reinstating the picture in its original state, and securing it entirely from injury during the process.
C.G.D. being likewise an Artist understands more perfectly the composition of a picture, and in consequence the exact application of the process of restoring it; which he undertakes to perform in a superior manner, let the glazings and finish be ever so delicate. – At the same time it will be found worthy of notice that the terms are much below the usual charges for restoring in the ordinary way.

This leaflet, dated May 1846, has the hand-written address 50 Upper John Street, Fitzroy Square on it, while another copy, with the same text, but undated, gives 81, Newman Street, Oxford Street.

Charles George alleged that he had had 10 years of experience as an artist, especially as a copyist of Italian Old Masters and that he is capable of restoring and aging missing bits of paintings in such a way that no difference can be seen with the original. I don’t know what the good people of the BBC’s Fake or Fortune programme would think of this practise, but in the 1840s, it was quite an acceptable thing to do.
In the 1861 census, we find Charles George in Leamington Priors, Warwickshire, still as a picture restorer. He died 29 May 1866 at Leamington Priors and probate was granted to his widow.(11)

The Catholic Directory and Ecclesiastical Register, 1851

Brother James at number 304 had died on 27 March, 1847, just 33 years old, but his widow Sophia continued the shop and an advertisement she put in the Catholic Directory shows us what kind of shop it was. I particularly like the combination of ornamental hair-work and engraving. Not quite what you would nowadays find in the same shop as watches and cutlery. Did James take over the business of Thresher who was mentioned by Tallis? And do the engravings the widow mentions in her advertisement have anything to do with Willey, the print seller? I will try and find out and let you know in the (future) posts on these two gentlemen.