The story of the extended Attenbury family who worked as pawnbrokers, silversmiths and/or jewellers in London is quite a complicated one and started in two villages in Northamptonshire, Blakesley and Titchmarch. I will come back to the Titchmarsh lot in later posts, but for now I will concentrate on George and Richard, the easier family group to sort out. George Attenborough senior (1791-1829), a farmer of Blakesley, and his wife Elizabeth had two sons who went to London to find a better life for themselves: George (1820-1892), who married Sarah Emma Parsons (1824-1897), and Richard (1822-1901), who married Elizabeth Coales (1829-1914). In 1844, George and Richard obtain their freedom of the City of London via the Company of Spectaclemakers by redemption. They are described as pawnbrokers and silversmiths. 1844 is also the year in which George marries Sarah Emma Parsons at Brighton. The couple’s son, Henry Arthur (1848-1930), receives his freedom of the Spectaclemakers in 1873 and takes over the business. Richard, although listed at number 204 when he obtains his freedom, at some point moves to 19 Piccadilly. We will come back to him later. 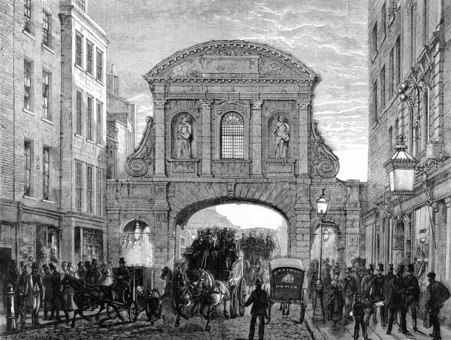 The three pawnbrokers’ balls can be seen on the Fleet Street shop on the right-hand side of the picture (Source: Illustrated London News via Wikipedia)

204 Fleet Street was built next to and over a small alleyway leading to Bell Yard, clearly visible on the left-hand side of the elevation at the top of this post and the rounded arch can also be seen just under and to the left of the pawnbroker’s symbol in the Illustrated London News illustration above. The shop was moved east a few houses to 193 Fleet Street, on the corner of Chancery Lane, probably in the early 1880s when Temple Bar was taken down and the Royal Courts of Justice were built. Another address found for the business is 71-72 Strand (photo here), but that may just have been a temporary address while the building work at Fleet Street was going on. 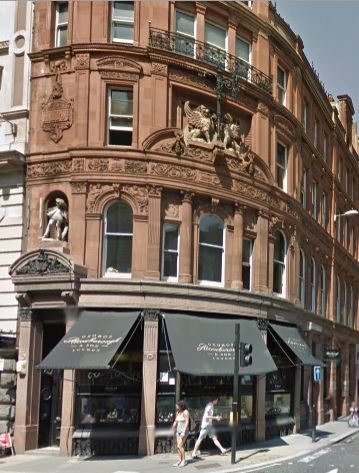 The new premises on the corner of Chancery Lane were designed by the architects Archer & Green and, according to English Heritage, opened in 1883. Two 1884 photographs can be found here and detailed pictures of the decoration on the building can be seen on the blog post by Ornamental passions here. George lives out his days at Grove Lodge, Muswell Hill, Hornsey where he dies on 22 January 1892. His estate was valued at over £313,000, but later resworn at £321,000.(1) His widow Sarah Emma died in 1897 and his son Henry Arthur in 1930.(2) Henry must have handed over the pawnbroker and jeweller’s shop between 1891 and 1901 as the census for 1901 finds him at Catesby Hall, Daventry, Northamptonshire, as a grazier and farmer, while the 1891 census still found him in London as a pawnbroker.

The 1911 census tells us that 193 Fleet Street was occupied by three pawnbroker’s assistants, one warehouse boy, a jeweller’s assistant, a housekeeper and a general servant. The name of the owner is given as George Attenborough.

This must be the son of Henry Arthur who was born in 1873 and obtained his freedom of the Company of Spectaclemakers in 1897 by patrimony, probably at the time when his father retired. George was a clever chap and had been to Oxford where, according to the 1901 census, he obtained a BA. He died in December 1949 and is described in the probate entry as of Catesby near Daventry and of 193 Fleet Street.(3) Over time, the shop became less of a pawnbroker’s and more a jeweller’s and still occupies the 1883 building. Their website can be found here. 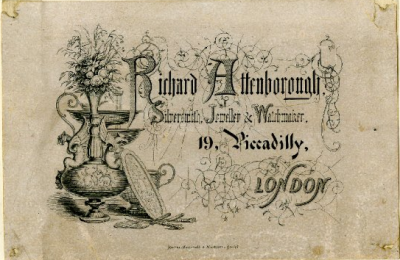 Richard, although listed at number 204 Fleet Street when he takes out his freedom, at some point moves to 19 Piccadilly. He is not yet there when the Tallis Street View for Piccadilly comes out (number 19 is then occupied by Woolley an ironmonger), but when he marries Elizabeth Coales in 1849, he is described in The Observer as of Piccadilly and Portman Street. The Post Office Directories of 1848 and 1851 give, besides 19 Piccadilly, also 8 Portman Street, Portman Square, as his address. Richard and Elizabeth do, however, live above the property in Piccadilly where the 1851 census finds them with two assistants and two house servants. Richard makes quite a name for himself when he enters some of his work in the Great Exhibition of 1851 and his work merits a whole page in the Art Journal Illustrated Catalogue. At the next exhibition, in 1862, some of his jewels are depicted in the catalogue and described as “most refined examples”. 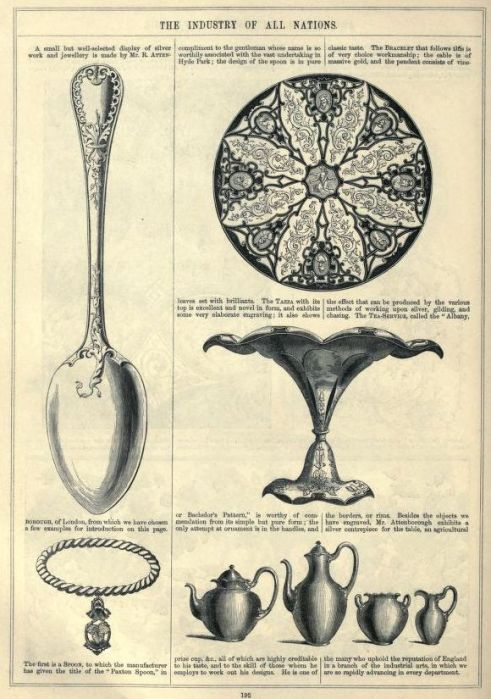 In 1856, the Post Office Directory lists Richard at both numbers 19 and 33. In 1870, he had his shop at 33 Piccadilly (by then encompassing numbers 34 and 35) entirely rebuilt and The Architect (27 August 1870) fills a whole column describing the new building (online here), illustrating it with the drawing of which you see the lower section below. 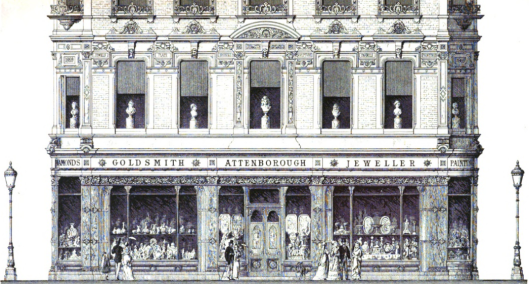 In the 1861, 1871 and 1881 censuses, we find Richard living at Whitley Grove, St. Giles, Reading, variously described as landowner, pawnbroker, silversmith and farmer. In 1873, his entire herd is sold at auction.(4) This had probably all to do with a compulsory purchase order on the farm taken out by Reading Town Council for drainage purposes.(5) Given the extensive building work at Piccadilly, the exclusive silverwork he produced which received only praise, and his move to the countryside, one might assume that Richard was doing very well, but instead of leaving a similar sum of £300,000 at his death in 1901 as his brother George had done, Richard left a ‘mere’ £5,800 in assets.(6) Not to be sneezed at of course, but more could have been expected. A possible explanation is a bad investment. According to culturalecology.info, Richard retired from his business in London in 1874 and bought the Lower Resolven colliery in Wales. By 1885, “extravagant living and ignorance of the trade brought their nemesis when he failed, with assets negligible and debts of nearly a quarter of a million”.(7) Unfortunately, the article does not give any references, so no idea where the information came from, but it would certainly explain the drop in Richard’s financial resources. By 1891, Richard had moved back to his roots and could be found at the Manor House in Horton, Northamptonshire, where he spent the rest of his days.

You may also like to read the posts on Robert Attenborough of Charlotte Street, and on Richard, Richard and George Attenborough of Shoreditch High Street and Crown Street, Finsbury Square.
More information on the Attenborough family can be found in blog post 243 on the Landed Families of Britain site (here)

2 thoughts on “George and Richard Attenborough, jewellers and pawnbrokers”