David Bogue started life on 16 October 1808 in East Lothian as the son of Jacob Bogue, a farmer, and Ann Johnston. According to the Oxford Dictionary of Biography, he became the assistant of Thomas Ireland, a bookseller in Edinburgh, but moved to London in 1836 to work for Charles Tilt. Tilt had his shop at 86 Fleet Street and specialised in illustrated books and lithographic prints (more on Tilt in a forthcoming post). In 1841, Tilt decided it was time to retire and, according to publisher and journalist Henry Vizetelly in his Glances Back Trough Seventy Years; Autobiographical and Other Reminiscences (1893), Tilt entered into an unequal partnership with assistant Bogue because of “his general shrewdness and steady application to business”. The idea was that Bogue would gradually pay back the money he owed Tilt for the partnership, between forty and fifty thousand pounds, and publications began to appear with both their names in the imprint. In December 1841, for instance, they had a page-long advertisement in the Quarterly Literary Advertiser announcing their latest publications. 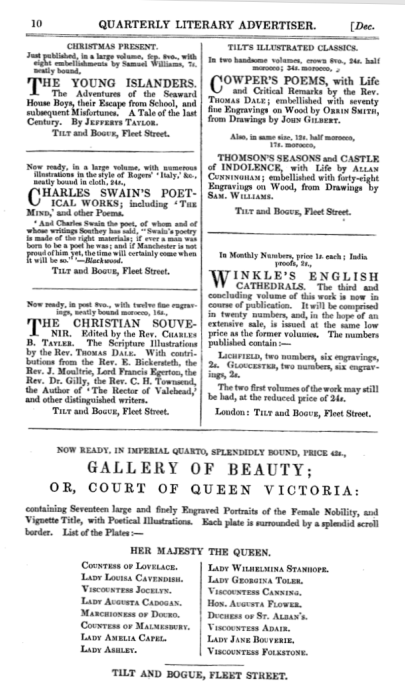 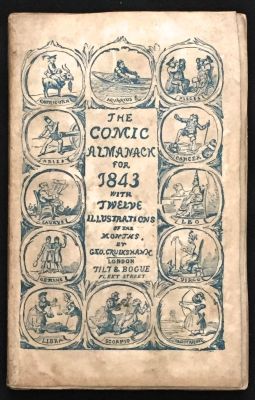 In 1843, the partnership between Tilt and Bogue was dissolved with Bogue to continue the business on his own. As the shop was within the City of London, he had to obtain the freedom of the City, but as he had not officially apprenticed to a London freeman, he had to do so by ‘redemption’ for which he paid a fine. In 1844, he married Alicia Edgar, and went to live at 39 Lonsdale Square. Alicia was also from Scotland and in 1846 and 1848, they had their children, Anne, Alicia and Charles Tilt, baptised at the United Reformed Church in Regent Square with “National Scottish Church” written above the entries in the baptism register.(1) In 1844, Bogue jointly published Isaac Walton’s Complete Angler with Henry Wix who had his bookshop just around the corner in New Bridge Street.

But things had not gone well with the business for some time. Bogue was apparently not as clever a businessman, or perhaps not as lucky, as Tilt had been and had entered into a few publishing projects that did not pay off, such as his European Library, which consisted of reprints of classic titles. The first title in the series was William Roscoe’s The life of Lorenzo de’ Medici, called the Magnificent and in the preface Bogue stated that the works in the series were to consist of volumes of 450 to 500 pages on paper of the best quality and in a handsome and convenient size. Each volume was to be bound in cloth, was to have an illustration, and was to cost 3/6, “being unquestionably the cheapest series of books ever published”. However, his main competitor, H.G. Bohn, was quick to imitate him with the Standard Library. Bogue lost his European Library to Bohn after a legal wrangle over copyright, and the series was incorporated into Bohn’s Standard Library. 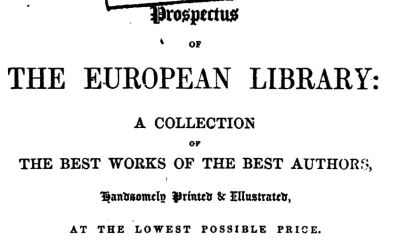 Bogue had one major asset, George Cruikshank, but not all of their joint ventures were successful. The temperance series The Bottle and The Drunkard’s Children flopped, and so did the Fairy Library, a series of children’s books with traditional fairy tales retold as moral stories by Cruikshank. Charles Dickens took exception to the distortion of the fairly tales in his Household Words and mocked Cruikshank’s efforts to rid the tales of any reference to alcohol by ‘rewriting’ Cinderella (see here for Dickens’s text). 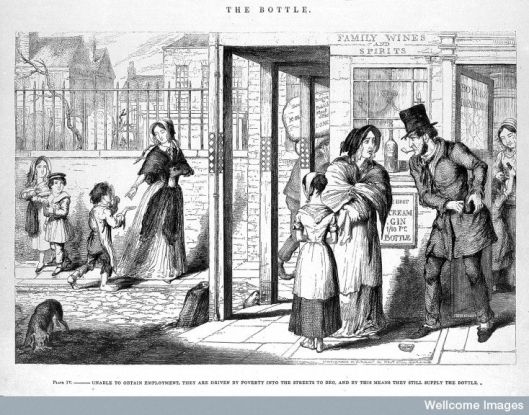 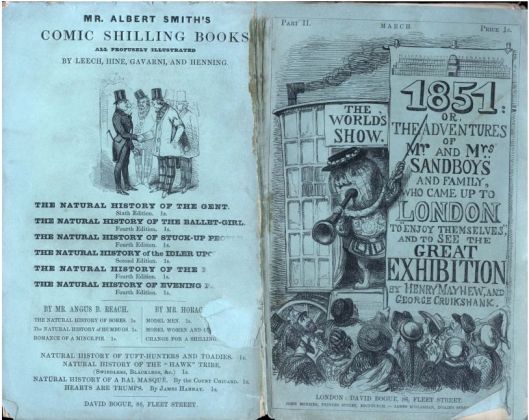 The Adventures of Mr and Mrs Sandboys by Henry Mayhew and George Cruikshank, 1851 (Source: fulltable.com)

The 1851 census found the Bogue family at 76 Camden Road. The census papers for 86 Fleet Street tell us that “no person sleeps on premises”. David died in November 1856 of heart disease, aged just 48.(2) His name still appeared in the tax records and in imprints in 1857 and 1858 as the executors tried to keep the place going with the help of Charles Tilt, but by 1859, most of Bogue’s copyrights and stock, as well as the shop, had been taken over by William Kent (his name is listed in the Land Tax records for 1860). The 1861 census and the 1861 Land Tax records for 86 Fleet Street, however, saw Frederick Arnold living there. He helped George Cruikshank pay off the debts he owed to the Bogue estate, because, according to Cruikshank, Arnold wanted to become his publisher.(3) Arnold died in 1874 and the bookshop at 86 Fleet Street was continued by his son Alfred who had to liquidate the business in 1877 to satisfy his creditors.(4) 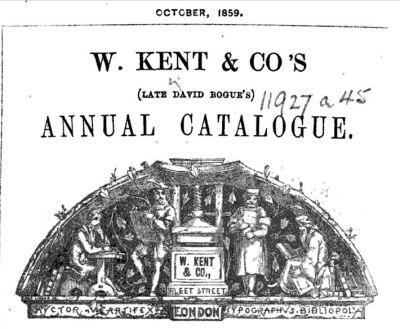 The shop itself was a sight to behold with its large windows curving around the corner into St. Bride Avenue. It was depicted many times, sometimes with the name of Tilt on the boarding, sometimes with that of Bogue. 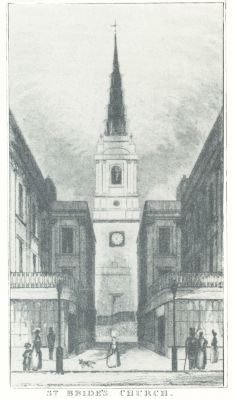 vignette in the Tallis booklet. Bogue’s shop on the left. 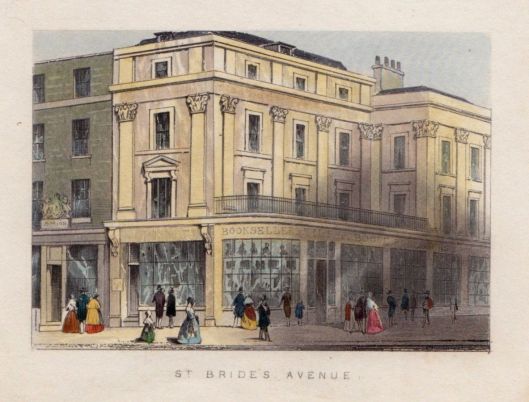