Solomon Barraclough was, according to Tallis, an importer of Cuban cigars. He no doubt imported cigars from Cuba, but he was in fact a general tobacconist where you could also get your daily dose of snuff, if you so wished. The first record I found of Solomon was his birth registration at Dr. Williams’s Library on 21 July 1807. Solomon’s parents were Samuel Barraclough of Postern Row, Liberty of the Tower, and his wife Anna Bere, the daughter of Barnaby Bere. Solomon’s date of birth was given as 30 March, 1796. His birth was registered at the same time as those of his brother Timothy (1792) and of his two sisters, Anna (1793) and Jemima (1798). Registering the birth at Dr. Williams’s Library showed a definite non-conformist tendency by Solomon’s parents, but he does not seem to have been too worried himself as his marriage to Mary Preston took place at Christ Church and the baptism of his son William Preston at St. Bride’s. According to the Land Tax records, Barraclough could be found at 46 Ludgate Hill from 1827 onwards.

In 1844, Thomas Prout of 229 Strand, a bush and comb maker, who also ran a patent medicine warehouse, advertised almost weekly in provincial newspapers, such as The Belfast News-Letter, with his pills against gout and rheumatism. As one of the satisfied customers appeared G.E. Smith, “Assistant to Mr. Barraclough, Snuff Manufacturer to the Right Honourable the Lord Mayor”. My first instinct was to dismiss it as an advertising gimmick, but G.E. Smith most likely actually existed and is the same as the male servant listed in the 1841 census as living with the Barracloughs in Ludgate Hill (Geo. Smith, 30 years old). And in 1843, George Edward Smith testified in an Old Bailey case, where he said “I am in the employ of Solomon Barraclough, a tobacconist, in Ludgate Hill”.(1) Pigot’s Directory of 1839 still lists Barraclough at 46 Ludgate Hill, but by 1843 (Post Office Directory) he had extended his business to include the premises at 70 Cheapside, on the corner of Queen Street. He shared this latter address with William Garratt, an umbrella maker, who, at the time of the first series of Street Views (± 1839), had shared 70 Cheapside with Sanders & Co, hatters. 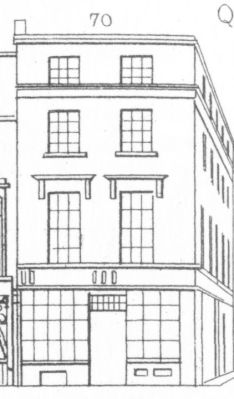 But, things did not go well for Solomon. Despite his apparent success in business, his personal life took a turn for the worse. His wife Mary died in August 1849 of cholera and this affected him so much that he committed suicide on the 1st of December. The inquest heard that on the morning of that fatal day, his son William heard strange noises coming from his father’s bedroom and when he went to investigate, his father was screaming and apparently trying to take hold of something in the air. His father got out of bed, but fell over and hurt his head. He was persuaded to go back to bed and his son left him to attend to the shop. His father said he would not go to the Cheapside shop as he normally did, but would stay in bed as he was not feeling well. Early in the afternoon, the bedroom door was found locked and when it was forced, they found Barraclough hanging from the bedstead rail. It was testified that Barraclough had not been himself after the death of his wife and would sit and cry for hours. A verdict of temporary insanity was returned.(2) Barraclough was buried on the 7th at St. Bride’s, as his wife had been, at, as vicar Charles Marshall noted in the register, the “Coroner’s order / temporary insanity”, thereby avoiding the refusal to the suicide of a Christian burial.

In the 1851 census, we find William Preston Barraclough, tobacconist, at 46 Ludgate Hill and George Botterill, importer of cigars, at 70 Cheapside. Botterill was later to move to 33 Cheapside and in the 1861 census the property is listed as empty. William Preston is still at 46 Ludgate Hill in the 1856 Post Office Directory, and also in the 1861 census, but at some point he entered into a partnership with Henry Wilson Preedy at 129 Strand. That partnership was dissolved at the end of 1864 with Barraclough to continue on his own.(3) The 1871 and 1881 censuses for Ludgate Hill no longer show number 46; they jump from 45 to 47 without any mention of 46. As we saw in the post on Thomas Treloar‘s carpet business, the area changed considerably because of the construction of the viaduct for the London, Chatham and Dover Railway Company, with houses set back, pulled down and rebuilt. The numbering was also changed and what were numbers 46 and 48 became one new property with number 78. The old Barraclough shop was probably pulled down in 1871 or 1872 as the Land Tax records for 1870 still record it for Solomon Barraclough – they apparently never updated it to his son’s name – but in the 1871 record his name has disappeared. The 1886 insurance map below shows were Barraclough’s shop used to be in relation to the new situation. 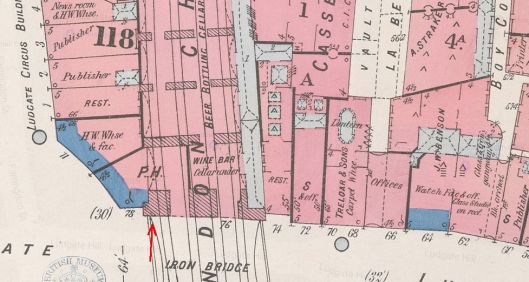 And William Preston Barraclough himself? No idea; he seems to have disappeared from London as I cannot find him in any of the usual places. Did he emigrate? If you have a suggestion, let me know.