Thresher’s was situated next to the Peacock Inn, and, although the inn was no longer to be found there at the time Tallis produced his Street Views, the peacock sign remained – until this present day – as the logo for the Thresher business. In 1779, Richard Thresher had taken sole possession of the business he had with one Mr. Newham, although the business itself had existed since 1696.(1) At the end of 1804, Richard retired and dissolved his partnership with George Miller, his nephew. Miller continued the business with another of Richard’s nephews, John Thresher.(2) That partnership was dissolved at the end of 1815 with John Thresher to continue the business on his own.(3)

And now for a bit of confusion over the shops as it turns out there were two John Threshers. Until his death in 1835 another John Thresher had a shop at Panton Street, Haymarket, especially geared to the theatre world. It may have belonged to Richard Thresher as there is a memorandum of an agreement in the City of Westminster Archives, dated 1795, about the sale of the lease of 1 Panton Street and the sale of fixtures, furniture and stock by Charles Shuile to R. Thresher. The tax records for Panton Street show John Thresher’s name from 1801. Kent’s Directory of 1823 duly lists that John as hosier & mercer at 1 Panton Street, but for 152 Strand, they have Wm Threasher [sic]. The John Thresher of Panton Street died in 1835 and left most of his estate to his daughter Ann who is also named executor together with friend George Miller. The executors duly insure 1 Panton Street with the Sun Fire Office, but the business is not continued as a Thresher shop, but taken over by John Brumby, a bookseller. In John’s will of 1835, he makes no mention of the shop in the Strand, nor of the people running it, which may very well indicate that he had no stake in it. It is possible that the John Thresher of Panton Street was Richard’s son and the John Thresher of the Strand was his nephew. The entry in The London Gazette about the end of the partnership of Richard with Miller clearly states that Miller and John Thresher were Richard’s “nephews and successors”. 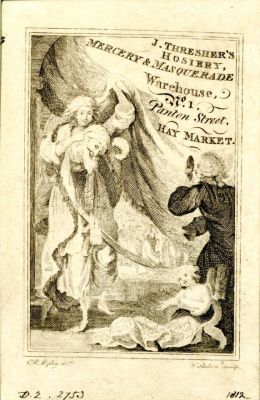 Pigot’s Directory for 1825-6 correctly lists 152 Strand for John Thresher. Also living at 152 Strand was John’s sister Mary who died in 1828 and appointed him sole heir and executor of her estate.(4) In 1833, this John Thresher, his son Henry Thresher and John Glenny insure the Strand property with the Sun Fire Insurance Company. The partnership of John Thresher with Henry Thresher and John Glenny is dissolved in late 1839 with Henry Thresher and John Glenny to continue the shop.(5) Glenny married John Thresher’s daughter Henriette Jane in 1836.(6) At the time of the 1841 census, Henry Thresher was living at 152 Stand with two apprentices and a couple of servants, one of whom is named Charlotte Glenny. In 1843, Henry Thresher married this Charlotte Glenny, thereby tightening the family relationship between the two families. In 1841, John and Henriette Glenny are living in New Street, Hampton, with retired John Thresher living next door; John T. died in 1846 (see footnote 6). From around 1847, Thresher & Glenny are starting to call their business the “East India Outfitting Establishment” and they advertise with ‘India Gauze Waistcoats’. And to transport these precious waistcoats and the other items of your tropical outfit, Thresher’s could also supply you with travelling cases for which they registered a design under the Act for Articles of Utility 6 and 7 Vic. Cap. 65 (28 February 1846, no. 660).(7)

advert in D.L. Richardson’s The Anglo-Indian Passage, Homeward and Outward (1845)

According to a 1846 document in the Westminster Archives, Thresher and Glenny applied to the Metropolitan Board of Works for permission to make openings in the party wall in order to connect the two properties of 152 and 153 Strand. The 1851 census does list 152 and 153 Strand together as the abode of John and Henriette Glenny. Also living with them is apprentice Frederick Giles, who was the son of Somerset farmer and maltster James Giles and his wife Elizabeth Thresher. I do not know how Elizabeth was related to the Threshers of the Strand, but as the name is unusual, there must have been a family link between Frederick and his employers. Although number 153 had been added to the living space of the Glennys, the tax records continue to list number 153 for Philip Firmin. In 1860 Firmin takes over number 154, but he still pays the tax for 153 until 1877 when the situation changes. Firmin is from then on still listed as the occupier of numbers 153 and 154, but Glenny is now listed as the proprietor of 152 and 153 and the occupier of 152. More on Firmin in a later post.

Glenny, by the way, not only expanded the shop, but also the items on offer. In 1854, for instance, he introduced a portable camp bed for which he received a patent. At roughly the same time, Thresher’s branched out into military uniforms, perhaps not such a great leap as many of the travellers to India were or had been military personnel. At some point John Glenny went into partnership with Frederick Thresher Giles and after John Glenny retired in 1876, Frederick entered into a partnership with Henry John Glenny (John’s nephew), which lasted until 1902.(8) The mortgage of the lease and the goodwill of the business were then transferred from Glenny to Giles, although the name of the business remained Thresher & Glenny.

The property at 152-153 Strand looks rather sad these days, but then, it is no longer in use as a shop by Thresher & Glenny. Plans to destroy the houses at 152-158 for a development by King’s College have been averted – hopefully permanently – and Save Britain’s Heritage has produced an alternative plan, see here. 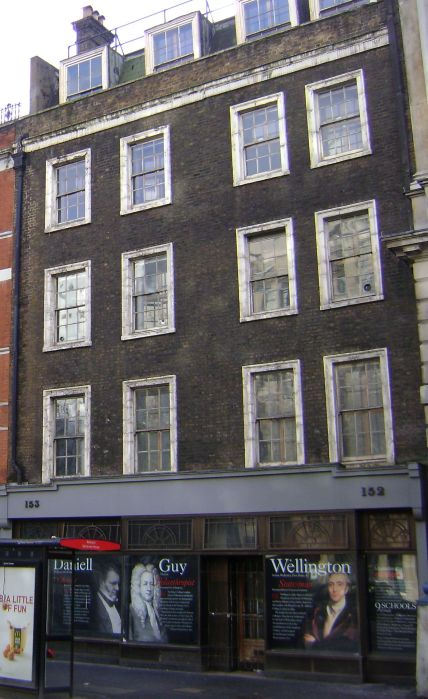 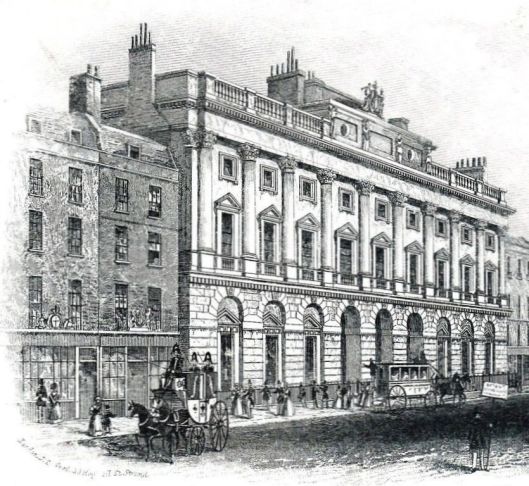 Over the years, Thresher and Glenny had shops at various London locations (see Wikipedia), but since 1992 they have been trading from Middle Temple Lane, so only for a short period in the long history of the firm, but it looks as if they have been there for centuries. The outside of the building is like a time capsule and gives us a good idea of what an 18th or 19th-century shop might have looked like. Thresher & Glenny are still going strong, albeit no longer under family management. The last of the line to work in the business, Charles Frederic Glenny, the son of Henry John Glenny, died in 1967. 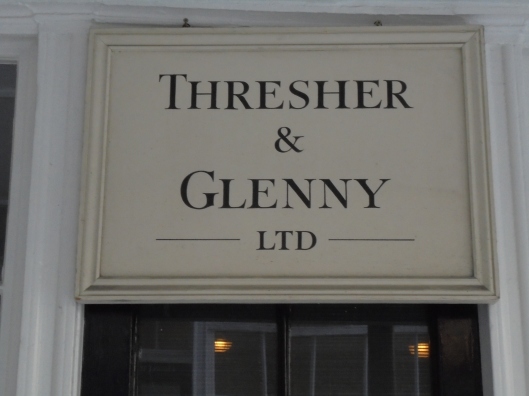