19 Langham Place only appears in the 1847 Supplement to Tallis’s Street View. If you look at the street view itself, the building of which number 19 was a part seemed to consist of four non-consecutive house numbers: 3, 19, 25, and 21, but in the index to the Supplement, the numbering is slightly more consistent: 3, 19, 20 and 21. The number 25 on the street view must have been a mistake. If we look back to the original street view of 1839 for Langham Place we see that the building of which number 19 was a part, did not yet exist. The space was completely covered by number 3, the ‘London Carriage Repository’ of Marks and Son. You can read about them in another post (here), but first Alfred Markwick, surgeon, whose place of business was erected in 1842 at the instigation of James Fergusson, Esq. On Goad’s insurance map of 1889 we can see that another renumbering has taken place and what was number 19 is indicated as number 4, but number 20 is still number 20. Number 4 was used as the entrance to St. George’s Hall which was built in 1867 behind what was once Markwick’s place of business. In the 1890s, numbers 20 and 21 were demolished for Queen’s Hall, which extended with a rounded front into Riding House Street. The entrance to St. George’s Hall was moved to Mortimer Street. The houses that were numbered 3, 19-21 in Tallis, St. George’s Hall, and Queen’s Hall no longer exist as they fell victims to an air raid in 1941. The ruins were demolished in 1952 to be replaced by the concrete Henry Wood House, which has been given the more logical numbering of Langham Place 3-7.

detail of an old postcard showing 3 and 4 (former 19) Langham Place (the entrance to St. George’s Hall sticking out into the street)

But Langham Place was not the only address with which Markwick was associated. He and his father Mark were involved in the Patent Epithem Company at 69 (in 1847: 32), King William Street. They shared number 32 with Nicholls & Pellatt, the wine merchants. You can see the two Markwick properties in the elevations above this post (click to enlarge). Markwick had developed a pad to replace the old poultices filled with bran. They were called Markwick’s spongio piline epithems, a name a journalist of The Era dismissed as “calculated to throw an unmerited taint of humbug and professional quackery about it, and one which few people will tax their memory to retain”.(1) Despite the dismissal of the name, the journalist accepted the fact that the pads themselves contained heat a lot longer than the traditional poultices and would not go putrid or hard and dry. They were made of sponge and wool with a backing of India rubber and very beneficial in cases of “rheumatism, sore-throat, tic-douloureaux, &c.” There was also a form without the sponge for protection of the chest. From an article in The Lancet (1846) on the epithems we learn that Markwick was surgeon to the Western German Dispensary and formerly an externe to the Venereal Hospital in Paris. 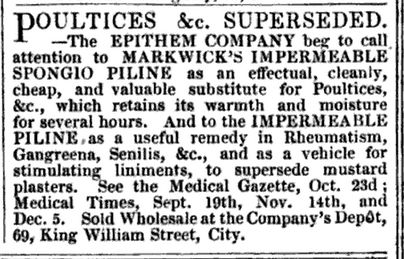 In time, the spongio piline came to be recognised as a valuable addition to the medical toolkit and the Epithem Company also developed an application suitable for horses, the “Horse Foot-Pad”, which was designed to fit inside the horse shoe.(2) Markwick’s invention even made it into the Great Exhibition of 1851 with specimen of his epithems for medical, surgical and veterinary purposes, and also with a spongio-piline sock, knee-cap, finger-stall, and breast poultice.(3) The entry was listed, by the way, for Mark Markwick, Alfred’s father. Markwick had received a Patent for his invention in May 1846 and in 1851 had granted an exclusive licence to his son who arranged with Messrs Kirkman and Brown for its manufacture. They were unfortunately not trustworthy and Markwick went bankrupt. He eventually regained his exclusive licence and made new arrangements with a Mr. Frimbey, and after the latter’s death with the Whiteheads. He sold them the licence for £350 and if an extension was granted, Markwick would receive an annuity during the extension. Ralph Radcliffe Whitehead, James Heywood Radcliffe, and John Dicken Whitehead of Royal George Mills, Saddleworth, Yorks, applied for such an extension of the patent in 1859, which was granted for five years in May 1860.(4)

Mark Markwick could be found at 32 King William Street as the manufacturer of the patent epithems, together with a business manager, a porter, and a servant. Alfred Markwick was certainly still at 19 Langham Place in 1851, as he is then listed in the Post Office Directory and in the census, but by 1856 he had left as one Alexander Bridge, also a surgeon, is found at number 19. And from 1860 onwards, we find the offices of The Society for Promoting the Employment of Women and those of The English Woman’s Journal on the premises. The Ladies’ Institute consisted of the offices of that journal, a reading room, a cloakroom for shoppers’ parcels, a coffee/luncheon room, a registry for jobs and a committee room. It attracted a number of campaigners for women’s rights, such as Barbara Leigh Smith and Emily Davies, and they became known as the Langham Place Group.(5)

The 1855 London and Provincial Medical Directory gives Alfred’s address as Church Street, Croyden, but in the 1861, 1871 and 1881 censuses he is listed at 1 Leinster Square. He became a Physician at the Westbourne Homeopathic Dispensary, and a member of the British Homeopathic Society. He remained at Leinster Square till shortly before his death on 12 March 1887 at 32 Ventnor Villas, Brighton.(6) 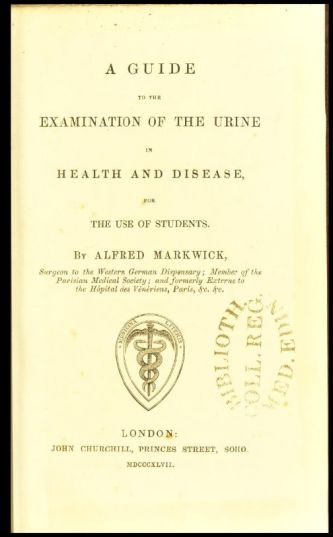 Markwick’s book on urine (1847), online via The Wellcome Library here

2 thoughts on “Alfred Markwick, surgeon, and the Epithem Company”