Thomas Day Huntly and his sister Mary, two of the five children of William Huntly and Elizabeth Lockyer, were baptised in Bath Abbey on the 21st of December 1783, the feast day of St. Thomas, hence young Thomas’s name.(1) In 1796, he was apprenticed to a well-known engraver of Bath, William Hibbart (also spelled Hibbert) and his son John. Hibbart was a printmaker, engraver, and copper-plate printer, who advertised as a teacher of the trade. William paid Hibbart the premium of £26 6s for the privilege, which was quite a substantial sum of money to lay out on the vocational education of a younger son (Thomas was the 5th child and the 3rd son). If Thomas served the regular 7 years’ apprenticeship, he would have been ready to set up on his own in 1803, but there is no evidence that he had his own business that early in his career. He may have worked for his elder brother John Lockyer Huntly who worked as an engraver in Bath from Pulteney Street and later from Sydney Buildings. The first we hear of Thomas Day in London is on 15 October 1811 when he married Elizabeth Allen at St. James’s Piccadilly. The marriage record does not give Thomas’s profession or address, so it is unclear what he was doing and where he was living at that time.

The first record of him in the land tax records for 74 New Bond Street is in 1816. In 1815, the property appears to be empty as no name has been filled in, and in 1814 the name of the previous occupant, Michael Visterin, a corset or truss-maker, has been crossed out. Visterin’s name had been listed at number 74 from 1809. The tax records for New Bond Street are slightly confusing, as two numbering systems have been used. Sometimes the house number is given, sometimes some sort of administrative number, sometimes both, and sometimes neither, as for instance in 1816. Number 74 was administrative number 62, and therefore number 74 is in reality house number 86. The administrative numbers do not correspond – as I first thought – with the house numbers before the renumbering in c.1805 as number 74 was then number 69 (see Horwood’s map of 1799). Fortunately, the record for 1814 gives both house and administrative numbers and although Huntly is not yet listed, it clearly shows his later neighbours: Harry Phillips, the auctioneer, at number 73 (admin nos 59-61) and William Tarner at 75 (admin no 63). At the time Tallis produced his booklets, Phillips was still working from number 73 and number 75 was occupied by Thomas Tarner, bookseller and stationer. Huntly probably moved into number 74 earlier than the tax records suggest, as the Westminster Rate Books already have him paying for the property in 1813. 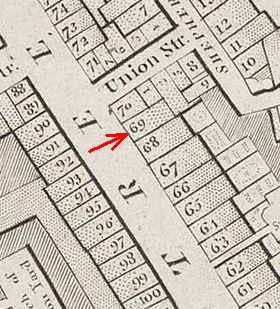 Thomas Day probably shared the building with others as, for instance, an insurance record and advertisements show one John Ewer Poole, tobacconist, working from number 74 at the same time as when Huntly is paying the tax. Poole had rather an eclectic career. In the 1811 London Directory he is listed as a jeweller in Gough Square, he then became a tobacconist in Bond Street and when he went bankrupt in 1821 he was said to be an auctioneer and appraiser.(2) Below two advertisements for the gentlemen:

After Poole left, number 74 was also used by Wallis and Co, who sold The Recreative Review from the premises. But despite these other occupants, Thomas Day Huntly continued his engravers business and his name is listed for number 74 in all the relevant directories. He engraved seals, but also bookplates (ex-libris), and he supplemented his income by organising exhibitions of paintings and/or drawings (see for instance the 1818 advertisement above); the admission price for these events was 1s.

In 1830, Thomas expanded the business to include 167 Regent Street, but he was not to reap the rewards of the expansion for very long as he died in late 1832 and was buried at St. George’s on the 13th of December. He left all his property, including the business, to his widow “for her personal use” and if she was to remarry, her new husband “shall not have it in his power to dispose of the aforementioned business or trade or any other property” that was part of the estate. After Elizabeth’s death, the estate was to be sold for the benefit of the children.(3) If either of the sons wanted to have the business, they were allowed to purchase it at a price determined by “persons competent to judge the same”. No new husband was in the picture and neither did the sons take over 74 Bond Street, so it was Elizabeth whom Tallis found on the premises when he compiled his Street Views. 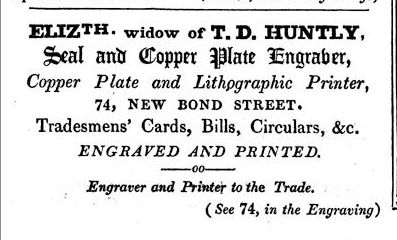 The 1841 census found Elizabeth at number 74 with sons George and Samuel; daughter Selina used the address in 1843 when she dissolved a partnership with Amelia Liberty as milliners and dress makers.(4) In 1851, the census lists Elizabeth with her sons Thomas and Samuel at number 74, and in 1861 with her daughter Ann. She died in 1868 in Marylebone; probate was only granted in 1885 to daughter Ann as the residuary legatee.(5) Elizabeth must have relinquished the business sometime after the census of 1861, where she is still listed as engraver and printer, and before the end of 1865 as from then onwards, advertisements appear for Henry Turner and Co., homoeopathic chemists and medical publishers. The tax records still list Elizabeth in 1864, but no longer in 1865, so she probably left in 1863 or 1864 – tax records tended to be a bit slow in updating the names of property owners. In 1869, John Keene took over the shop in New Bond Street after his partnership with the Turners was dissolved. See for the rest of the story on the chemist’s here. It is not entirely clear what happened to 167 Regent Street. Pigot’s Directory of 1839, and the 1843 and 1851 Post Office Directories just show Elizabeth Huntly at 74 New Bond Street, although she apparently still paid tax and rates on the Regent Street property, at least until 1843. The Post Office Directories (and Tallis, by the way) give William Eyre, hosier, as the occupant of number 167, but he may just have rented (part of?) the shop. I will try to find out the exact circumstances when I write the post on Eyre. 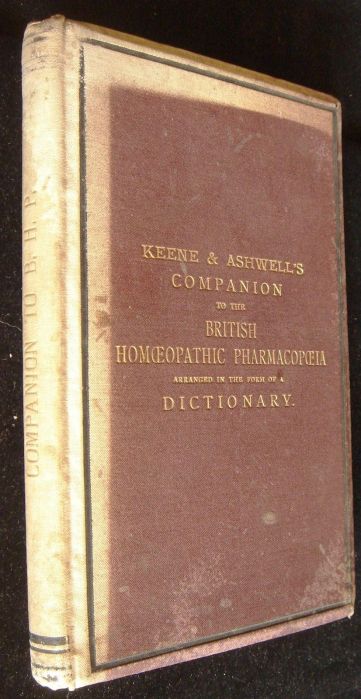 1876 publication by Keene and his partner Ashwell

74 New Bond Street as the Huntleys knew it no longer exists. In c.1900, a new building, designed by Henry John Treadwell (1861-1910) replaced the old one. The Treadwell building is now Grade II listed; you can read the listing text here and see the building in Google Street View here.

(1) I am most grateful to Debra Lyons, a Huntly descendent, who sent me a lot of information on the family, which has been incorporated into my text.
(2) The London Gazette, 16 January 1821.
(3) PROB 11/1809/120. Children mentioned in his will: Thomas Johnson, William, Elizabeth, Mary Anne, Selina, John Lockyer (named after his uncle), George, Samuel Hazard, Anne, Elizabeth Selina.
(4) The London Gazette, 2 October 1846.
(5) England & Wales, National Probate Calendar (Index of Wills and Administrations), 1885. Estate valued at £150.