The story of 10 Mortimer Street starts in 1814 when the tax records list the premises for John Pettinger & Son. They may have been there before that date, but so far I have found no evidence to support that idea, so I will stick to the departure date of 1814. The following year, one Edward Jackson and John Pettinger of Mortimer Street dissolve the partnership they had as plumbers and glaziers.(1) Where Jackson went is not made clear, but Pettinger remained the plumber of Mortimer Street and his name appears in subsequent tax records and directories. But in 1837, John died at the age of 57 and on 30 March he is buried at St. Marylebone. In his will, he leaves “all my stock in trade implements and utensils of every kind used and employed in and about my trade and also all my household furniture books plate linen china wines goods and other effects which shall be in my house in Mortimer Street at the time of my death” to his widow Sarah. Besides his wife, he names his friends John Black of Romney Terrace and Francis Wills of Mortimer Street as executors and they are to make sure that his other assets provide an income for his widow, and after her death for his children, John, Sarah and Charlotte. The executors declare that the estate does not exceed the value of £3,000. I am afraid that Sarah did not survive her husband for very long and in her will, John Black and Francis Willis are again named as the executors. Black declared that Sarah had died on 29 November 1838 and that the value of her estate, which she left to her daughters, did not exceed £800.(2)

And that is about as far as we can take the story of the Pettingers in Mortimer Street. Son John did not continue the business after his mother’s death, at least not at Mortimer Street. The 1841 census found him plumbing in Ogle Street, but we will leave him and continue with the property at 10 Mortimer Street. After Sarah’s death, it became a coffee house and the first proprietor we find there is Richard Holt Gibb who used top have a grocery shop in Tower Street.(3) In December 1839, he insured the Mortimer Street property with the Sun Fire Office, so probably just after Tallis had been round to gather evidence for his Street Views as it seems unlikely that he would have the name of the previous occupant in the booklet if Gibb had already been there. Anyway, the 1841 census sees Richard firmly established as coffee house keeper. And it is as such that he is asked to give evidence in the case of a failed attempt to shoot Queen Victoria.

John Francis, a young jobbing carpenter, lived in various places around Mortimer Street and around the corner in Great Titchfield Street. At some point he lodged for three weeks at Gibb’s coffee house, but left when it became too cold. Gibb said that the room Francis rented did not have any heating, so it was logical that the lad removed himself to other lodgings, but despite that, he was still in the habit of frequenting the Caledonian Coffee House, sitting for hours over his cup of coffee. He had trouble getting work and in a desperate attempt to set himself up in business, he rented a shop in order to become a tobacconist. He ordered goods and stole some money from a fellow lodger to pay for the stock, but the landlord (not Gibb, but the one in Great Titchfield Street) found out quickly enough that it was Francis who had purloined the money and went and got it back. When the supplier of the tobacco goods found out that money was unlikely to be coming in, he repossessed his property and Francis was left with nothing. In desperation he bought a pistol from a pawnbroker and loitered around Hyde Park. When Queen Victoria and Prince Albert went past in their open carriage, he fired a shot at them, but missed miserably. In another version of the story a police officer knocked the pistol out of his hand, thereby avoiding a fatality. Whatever the true course of events, Francis was imprisoned, found guilty of high treason and sentenced to be hung, drawn and quartered. But that barbaric sentence was later revoked and commuted to transportation. Francis spent the next years in a penal colony in Australia, but later managed to work again as a carpenter / builder and to raise a family. He died in 1885.(4) 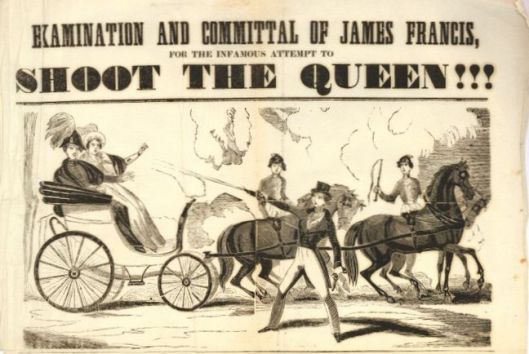 Gibb was an enterprising type of chap and when land across the Thames in Battersea became available for development, he bought a plot and had six houses built by a Mr. Waghorne.(5) The houses are still standing and although a few cosmetic changes have been made to some of them, they still look basically the same as in 1840s. The houses were known as the Caledonia cottages, and one wonders what link Gibb had with Scotland as he had already named his coffee house in Mortimer Street the Caledonian Coffee House. And not just that one, but also the one he had later. In an 1846 Old Bailey case about a stolen watch, Gibb stated that he was the proprietor of “the Caledonian coffee-shop in Westminster-bridge-road … I had opened about a quarter past five o’clock that morning, which is my usual time”.(6) Obtaining your (very) early morning coffee was apparently no problem in 1846, presumably not just at Gibb’s, but in other coffee houses as well. Perhaps getting up early did not appeal to Richard for very long, as in 1851, the census lists him as a manufacturer, living at 25 Bridge Road, that is on the other side of the road and nearer to the bridge than the cottages he had built. Unfortunately, the census does not say what he was manufacturing, but in 1861, he could be found at Chester Gardens, Lambeth, as a dealer in chicory and in 1871 he is described as a “manufacturer of coffee refining powder”, so the link with coffee remained. 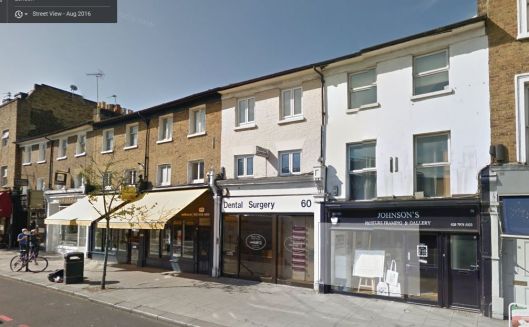 In the mean time, the coffee house in Mortimer Street had various other proprietors; in 1851 it is William Dennington who runs it, and certainly from 1856 onwards, but perhaps earlier, the proprietor is David Read. By 1871, the census has George William Hawkins as the coffee house keeper, but not for long as on 10 April of that year he died. His widow continued to run the coffee house and can be found there in 1881. By then the house numbers in the street have been changed and number 10 became number 46. In 1891, the property was no longer used as a coffee house, so I will stop the story of 10 Mortimer Street at this point.

As no picture of the coffee house in Mortimer Street is available, I will round off this post with an illustration of a coffee house in Great Russell Street, also called the Caledonian, but as far as I know without a link to Gibb. 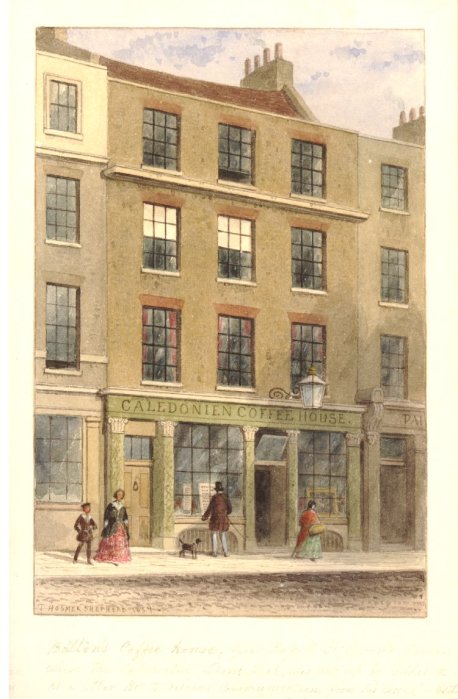