We are starting this post with a section of a 1752 map showing the top part of Lamb’s Conduit Street. I have turned the original image to give you the same perspective as a modern map with the north at the top. The map was produced to record the ground rents of individual properties in the area (you can see the complete map here) and although it is far too early to be of any use in determining who occupied 40 Lamb’s Conduit Street at the time of the Tallis Street View, it does help to explain why James Yeomans had his name recorded over a whole block of houses. The passage shown on the left of the elevation at the top of this post is the same as the one in the map indicated by the red arrow. The houses over which Yeomans had his name depicted are the ones indicated by a red line. In the 1752 map, the yard behind the houses was occupied by Edward Chapman, hence Chapman’s Stable Yard, and Yeomans occupied the same yard almost a century later, including the houses situated around the yard. The section on the left of the 1752 map is also a stable yard, but that one belonged to Lady Milman and a Mr. Wentworth. Do notice, however, the exit to the north of that yard into what would become Guilford Street.

If we jump forward to the 1841 census, we find James Yeomans at 40 Lamb’s Conduit Street with his wife Elizabeth and children George and Mary. Besides the family, we find various coachmen, ostlers, and stable boys on the premises, which is not surprising considering the type of establishment Yeomans ran. His occupation is simply recorded as ‘livery man’ in 1841, but the 1851 census elaborates that into ‘job master livery stable keeper’. The 1851 census gives his address as 87½ Guilford Mews, so presumably at the other end of the yard from where he lived in 1841. The 1851 census also tells us that James was born in Northamptonshire, which helps to work out that he was probably the James born in 1798 in Desborough as the son of Joseph and Rebecca Yeomans.

In an otherwise not very interesting Old Bailey case of 1832, one John Yeomans gives evidence and says “I live in Brunswick Mews. I drive the chariot, no. 729 – it belongs to my brother, James Yeomans …”(1) Brunswick Mews would certainly be close enough to Lamb’s Conduit Street for John to work there, but there is another reason and for that, I have to go back to two trade cards in the collection of the British Museum. 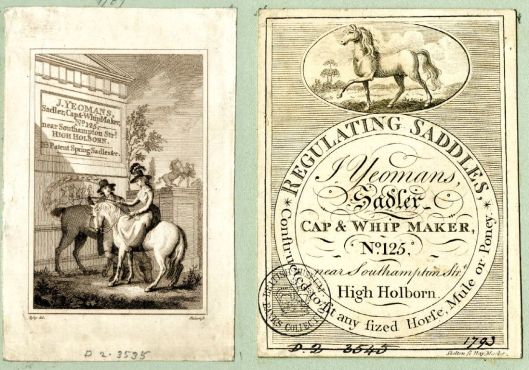 Trade cards for Joseph Yeomans (© Trustees of the British Museum)

Joseph Yeomans, sadler, cap and whipmaker of 125 High Holborn appears in the Land Tax records for the Holborn area in the years 1789 to 1802, so a lot earlier than John and James Yeomans appear on the scene, but an 1836 report in Jackson’s Oxford Journal relates how some post boys had caused an accident by dangerous driving, and one of them is said to have been in the employ of Joseph Yeomans, Williams Mews, Brunswick Square.(2) And if we look at the baptism record of the children of James and Elizabeth, we see that the address given is Brunswick Mews and James’s occupation as coachman in 1828 and coach master in 1831. Is this too much of a coincidence? The whole Yeomans family seems to have been involved in trades connected with horses and transport, centred around the area of Brunswick Square, And although there is no proof that the Joseph of High Holborn is the same as the Joseph of Williams Mews, nor is there any evidence at the moment to link Joseph with James and John, a close family relationship seems likely.

In 1833, a police constable investigated a case of drunk and disorderly at the Hope public house. He later testifies that the drunken man, one William Jutten, was just coming out of the pub when he arrived and that he ordered Jutten to go home. The official hearing at the Old Bailey and the newspaper reports differ in almost every aspect of the case, but the outcome for Jutten was the same: he died that night of alcohol poisoning.(3) Jutten had been drinking at the pub with his coachmen colleagues for a good part of the day and apparently said that if anyone would buy him another half pint of brandy, he would drink it. The landlord refused to give it him, but James Yeoman came in and bought a half pint which he was to share among his friends, but he did not, and gave it all to Jutten. Yeomans was taken into custody and charged with manslaughter for enticing a fellow well into his cups to drink more. He was taken to Newgate prison to await his trial, but he was acquitted as various witnesses spoke up for him and testified that Jutten had been drinking far too much even before Yeomans came into the pub and that he was in no way forced to drink that final cup of brandy. The criminal register duly noted “not guilty”.(4) Jutten’s name is variously given as Sutton or Gutten and the pub in which the unfortunate event took place was either in Wilmot Street, Brunswick Square, or in Windmill Street, Bryanstone Square. The first is correct. Wilmot Street was the southern section of Kenton Street and there was an entrance to Brunswick Mews in that street. Wilmot Street is now obliterated by the Brunswick Centre. William Jutten was buried on 23 January at Spa Fields.

According to the report in The Examiner about the events leading up to Jutten’s demise, James was then still to be found at Brunswick Mews as hackney coach master, but at some point, he must have left for Lamb’s Conduit Street. He was certainly at this new address in 1839 when Pigot’s Directory listed him there and in an Old Bailey case of that year, the witness James Walters, says “I live with Mr. James Yeomans, a stable-keeper, in Lamb’s Conduit-street”(5) He may very well have taken over in 1837 after the bankruptcy of James Moorey who had been trading from various locations in London as farrier, veterinary assistant, cabriolet proprietor, and was “late of Rugby Yard, Lamb’s Conduit Street”.(6) Rugby Yard was the “official” name for Chapman’s and Yeomans’s Yard, as Rugby School owned a large section of the land in the area, and indeed, the 1752 map mentioned above was made to keep track of the rents for the Rugby estate. The 1843 Post Office Directory still has the name of Rugby Yard for Yeomans’ place of abode.

Both Yeomans’ children found their marriage partners close to home. In 1845, James Yeomans’ daughter Mary married John William Rope, a confectioner of 31 Lamb’s Conduit Street, about whom you will read more in a forthcoming post, and in 1857, son George married Mary Soutten Hawes, the daughter of a tailor at 67 Lamb’s Conduit Street. Tallis had a Mr. Hopkins, tailor, at that address, so we will see in the post on him how this relates to Hawes. The 1851 census showed James, his wife Elizabeth, son George and various stable men at the yard, but in 1855 James died and left his estate to his wife and two children.(7) George took over as a job master and remained at 87½ Guilford Mews until his death in 1878.(8) The 1881 census shows a Frederick Wright, cab proprietor, at Guilford Mews with various stable men, ostlers and coachmen living in what they still call Yeomans’ Yard. Also in 1881, a redevelopment plan was put forward for Rugby Yard and a request for tender was issued; the firm of Langmead and Way entering the winning bid. What is unclear is whether that included the section called Yeomans’ Yard that ran out of Guilford Mews, or whether it was just the section closest to Lamb’s Conduit Street. Nowadays, the building of the Camelia Botnar Laboratories of the Great Ormond Street Hospital occupy the site in Lamb’s Conduit Street, but I have not been able to work out whether that is still Langmead and Way’s building or a later one. A look at Google Street View shows that whoever built it had a sense of history and the entrance on the left-hand side is still a rounded arch through which you could envisage Yeomans’ hackney cabs coming out.