In the 1810s, Francis Fourdin could be found at 11 Wardour Street. Although the 1822 Land Tax records for the parish of St. Anne, Westminster, do not give any house numbers, they list Fourdin three houses away from Noah Goetze, a stationer, listed by Tallis at number 8. The names of the other near neighbours of Fourdin cannot be found in the vicinity of number 11 in Tallis, so are no help in identifying the exact location of Fourdin’s shop. So far, so good, but an insurance record of the Sun Fire Office for 11 October 1821 has Fourdin as oilman of 11 Wardour Street with the remark “other property or occupiers: 118 Wardour Street”. It seems that Fourdin’s business was doing well and he went into property. Another insurance record, of May 1820, has him still at number 11, but with “other property or occupiers: 12 Wardour Street (printseller); 5 and 6 Junction Place Paddington”. Already in 1810 we see Fourdin paying insurance on number 12, although that particular record does not tell us who the occupant of that shop is. Never mind, we will sort number 12 out some other time. For now, back to number 118, the subject of this post. In the 1810s, one James White occupied number 118 as a cheesemonger. He is still there in September 1821 when his name and address are used as the correspondence address for an advertisement.(1) But, the land tax record for 1823 tells us that Fourdin had supplanted James White, and that the building is a new one and that Fourdin had to pay more tax than White.

As we can see from the vignette in the Tallis booklet, the building was quite substantial and it is no wonder that Fourdin had to pay more in tax than White had done. We also see from the vignette that it is no longer Fourdin who had his business there, but Brown, late Fourdin. Already in April 1825, the insurance on the property is paid by Sprigg Homewood, oilman. If we look back at the insurance records, we see that in October 1822, Fourdin is described as “gent” and one can wonder whether he actually used the property himself, or whether he was just the landlord. Fourdin died in 1828 in Watford, Hertfordshire, and from his will we learn that he originally came from France where his two brothers and a sister still resided. He did not have any (surviving) children, but he leaves money to various relatives on his wife’s side, as agreed with his late wife. He also leaves various sums to friends and servants, among whom two shopkeepers we come across in Tallis: Charles Legg of Wardour Street, and Alexander Williams of Wigmore Street.(2) All very clear, except for the fact that Fourdin had bought property before he had acquired his letter of denization in May 1822 and had, as such, bought some if his properties illegally and the Crown objected to the property being sold to benefit the heirs abroad. The case came before the High Court of Chancery in the Easter term of 1834 and as far as I can understand the legalese, Fourdin was indeed entitled to bequeath the properties because the letter of denization implied that right. If I have misunderstood the juridical terms, please put me right. You can read the full report on the case here. 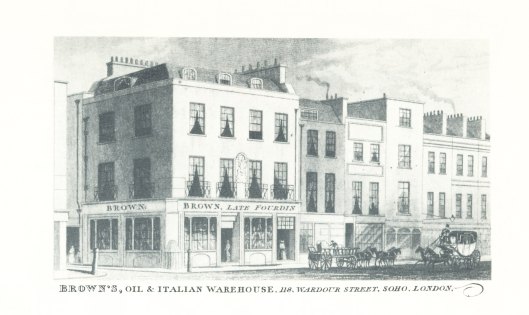 So now back to Mr. Homewood who paid the insurance in 1825. His business was not to last for very long and although the insurance records do not tell us what happened next, the Land tax records do. One Moses Brown, who, in 1821, had occupied 10 Wardour Street, so next door to Fourdin at no. 11, could be found at no. 118 in 1828. It appeared that he did not own the property, as his will of 1837 only mentions no. 122 as his freehold “let on lease to Mr. William Webb”. And indeed, in the 1828 tax record, we clearly see that Moses Brown occupies no. 118 which is owned by (the heirs of) F. Fourdin and no. 122 is occupied by Webb.(3) In an advertisement of 1834, the shop at no. 118 is described as “Brown and Son’s Oil and Italian Warehouse”.

After his father’s death Edward Brown takes sole responsibility for the shop and pays the insurance on the property on 17 May 1837. He died in 1844 without issue and he leaves his goods to his mother and sister.(4) As we saw in the 1834 advertisement, and indeed on the façade of number 118, the Browns ran an Oil and Italian warehouse. We have a description of an oilman from N. Wittock’s Complete Book of Trades (1837), where it is said that such a tradesman

deals in an infinite variety of articles for domestic use, as well as the main one where he derives his commercial cognomen. The oils sold by him are of several sorts, as, first, train oil for lamps, and soft soap; second, linseed oil, for house-painters and medical applications; and the “sweet oils”, as, third, Florence, salad or nut oil, for the table; fourth, rape oil, which obtains the term “droppings”, and is used for oiling the stones on which carpenters and other workers in wood sharpen their tools … . This, and a fifth kind, from the palm tree, for soap-making, as well as the first mentioned (derived from fish), are chiefly vended at wholesale to the cloth manufacturers, soap boilers, and lamp-contractors.

Judging by the advertisement Brown had in the Tallis Street View booklet, he specialized in the third kind of oil, the ‘sweet’ oil for the table: Florence and Lucca oil, presumably olive oil. That is not to say that he did not have the other kinds of oil available, he may very well have stocked those as well, but in the advertisement his shop very much appears to have been what we would now call a deli or delicatessen retailer.

Fourdin had also been referred to as an Italian warehouseman, for instance in an 1826 advertisement for a butler who is looking for new employment. Letters could be directed to Mr. Fourdin’s Italian Warehouse.(5) A year earlier, a cook, who was also looking for a new place, intriguingly, has letters addressed to “the late Mrs. Vollam’s, Italian Warehouse, 118 Wardour-street”.(6) It turns out that Mrs. Fourdin’s last name before her marriage was Vollam (or Vollum) and that one Joseph Vollam, oilman, insured a building in Wardour Street, corner Hollen Street – so possibly number 118, although I would have said that was on the corner of Noel Street – with the Sun Fire Office in 1790 and 1792. The marriage registration (1810) for Francis Fourdin and Mary Vollum lists her as a widow. Was she Joseph’s widow? Yes, most likely. Joseph mentions his wife Mary in his will(7), and although there may of course have been two Mary Vollams, widows, it seems most probable that Joseph’s widow married Francis Fourdin. So in stead of going forward in time with this story after Edward Brown died in 1844, we have taken a U-turn and have come back to Fourdin again, and after this full circle, I will leave you with a shot of the property from Google Street View (July 2014).