Although Tallis shows The George, the pub on the corner of Middle Row, Holborn, in his Street View, he does not list the proprietor in the index of booklet 8. A mistake? Possibly, because there is also another shop with the number 13, occupied by William Blissett, a hatter. The house numbering in Middle Row was rather confusing at times, but at least the pub on the corner was always at number 13. We will come back to Blissett in another post, but first the pub. 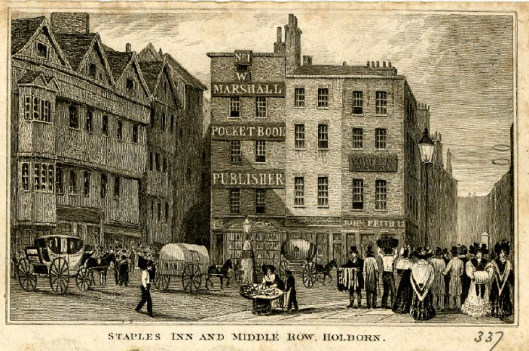 Anonymous print showing the top of Middle Row with houses numbered 1 (on the left Marshall), 2 (centre, no name) and 13 on the right with the name of Joseph Frith, so dating from somewhere between 1800 and 1830 (© Trustees of the British Museum)

Joseph Frith was the proprietor in 1806 (and possible before that) and after his death, his son William took over. Unfortunately, William died, just 29 years old, in 1838 and a year later, his widow Mary Ann married widower Henry Finch of Grays Inn Lane.(1) The 1841 census saw Henry living at number 13 with young daughter Sarah from his first marriage. Mary Ann is visiting her parents in Bedale, Yorkshire, with two children from her first marriage and a baby boy, Henry junior, from her marriage with Finch. Alas, Mary Ann died a year later and in 1851, Henry is assisted in the pub by Charles Smith of Bedale, most likely Mary Ann’s brother. Something has gone wrong in the census registration for that year as Henry is listed twice; not only at 13 Middle Row, but also as tavern keeper at 20-21 Albert Terrace where we also find his daughter Sarah, his stepdaughter Jane Firth and, as housekeeper, Elizabeth Smith from Bedale, most likely Mary Ann’s sister. Besides various servants for the pub, we also find another Henry Finch on the premises as cellarman. Judging by his age, 17, he cannot be Henry and Mary Ann’s son, as the son would only have been 10 or 11 years old. Perhaps another relative?

Ten years later, Henry has made another move and is now to be found as hotel keeper at the Holly Bush Hotel in Norwood. He died there in December 1862 and probate is granted to his son William, one of the executors.(2) William is described as wine dealer of 2 Middle Row Place, which was just to the west of Middle Row itself. 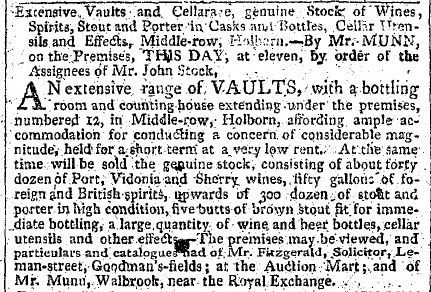 But back to The George at number 13. According to the Post Office Directory of 1851, Henry had extended the business to include number 12, which was not next to number 13, but on the south side of Holborn itself. An explanation may be found in an 1810 advertisement for the extensive vaults and cellars under number 12. Perhaps that was what attracted Finch? In the early 1850s, number 2, which is next door to Finch, was occupied by a carver and gilder, first by Alexander Marshall and then by James Piper. A drawing by Thomas Hosmer Shepherd in the British Museum shows Middle Row head on and, although it is not terribly clear, the names of Finch (green fascia) and J. Piper (yellow fascia) can be made out. The shop on the left of the Row is number 1, but I cannot make out the name of the shopkeeper [Postscript: His name was Robert Cole (see comment by David Wilson]. The drawing by Shepherd is dated 1857, but in a later picture of 1867, you can see that Finch had extended his pub to include number 2 with a matching front. Whether he held on to number 12 after he acquired number 2 is unclear. I only found evidence for number 12 in the 1851 and 1856 Post Office Directories. 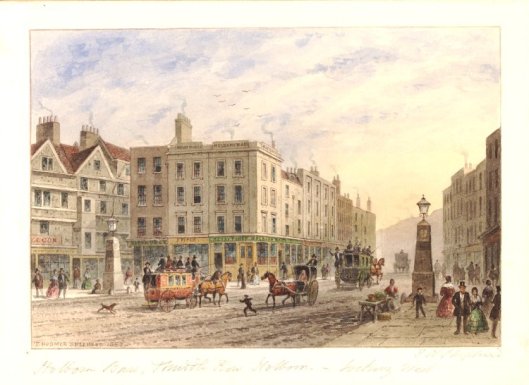 In July 1862, that is half a year before his death, Henry requested that his licence as a victualler for number 13 be transferred to his son Henry junior.(3) Whether it was Henry senior who extended the business to include number 2, or whether it was his son is unclear, but the effort involved did not bring any long-term advantages, as in 1867, Middle Row disappeared completely. At various times in the nineteenth century, plans had been put forward to remove the Middle Row houses as they were impeding the flow of traffic in Holborn(4), but nothing had come of those plans until 1867 when the Board of Works made a start with the removal.(5) Henry, as did the other owners of properties in the Middle Row block that was to be demolished, received compensation from the City. The total plus interest for him came to well over £10.500. For unfathomable reasons, the Board of Works referred to The George as being at numbers 11 and 12. Perhaps there had been a recent renumbering of the houses? The pub certainly did not move. 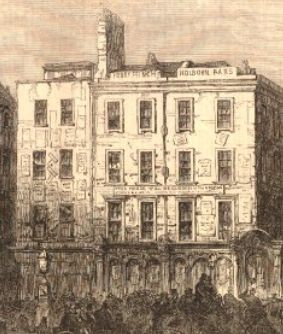 Part of a picture from The Illustrated London News of 28 September 1867 showing numbers 1,2 and 13 with posters in the windows and on the facade to announce that the houses were to be demolished

After the demolition of Middle Row, Finch removed his pub to 333 High Holborn, which used to be 8 and 9 Middle Row, that is: on the south side of Holborn itself, so not in the part of Middle Row that was removed. Goad’s insurance map of 1886 shows number 333 between the alleys leading to Staple Inn Buildings and Tennis Court. It also shows that Finch had extended the business backwards into Staple Inn Buildings. In July 1867, he asked for his licence to be transferred to the new premises, which was granted.

I have not found any decent pictures of the part of Middle Row that was hidden by the block of houses in the road and later became 328-336 High Holborn, but there is a photograph of a small part of Finch’s pub at number 333, which, after the move from Middle Row, he called ‘the Old Holborn Bars’. The photograph was taken in c. 1910 to show the rather grand Birckbeck (later Westminster) Bank next door and by chance the pub managed to get into the picture. I have cut off the bank as that is not what this post is about and although it is not a very good photograph, at least it shows that Finch’s still existed in those days and I think it even survived until World War II. For the original photograph with the bank see here. 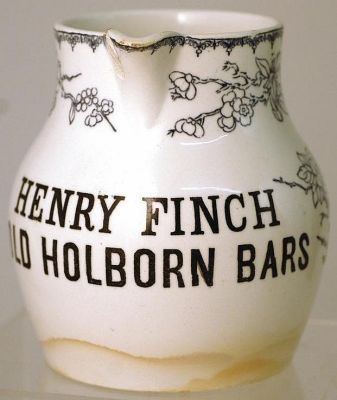