A search for the history of 179 Fleet Street brought me to the trade card collection in the British Museum where they have a card for Thomas Neave, an oil and colourman. Neave has left precious little trace of his life, but I found an indenture for the year 1800 when he was apprenticed to James Soames. This document tells us that his father was David Neave of Leadenhall Street, a victualler, and an insurance record of 1815 places Thomas at 179 Fleet Street, but that is more or less it. If he started working at number 179 straight after he obtained his freedom, he would have been there from 1807 or 1808 onwards, but certainly no longer than till 1816. The only tax record I could find for Neave was from 1816, so all we can say with a hundred per cent certainty is that he was at 179 Fleet Street in 1815 and 1816. In 1817, the property at 179 Fleet Street is registered for William Parker; in 1828 for Parker’s widow Elizabeth; in 1829 it is empty; and from 1831 to 1834 a William Knight who can be found there. And from 1835, the tax records show the name of Hooper, the subjects of this post. More on the Hoopers themselves in a minute, but first something about the developments in the area and the consequences for the Hooper premises. 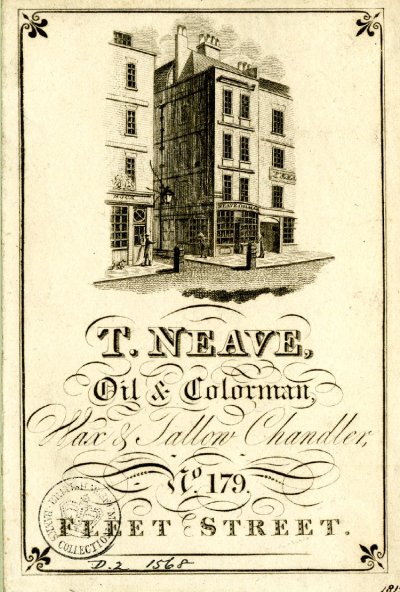 Neave did leave us this nice trade card which depicts his shop. On the right of the picture you can see a small section of the neighbouring business, Peel’s Coffee House, and on the left you can see the shop of Samuel Nock, a gun maker. Peel’s Coffee House was still there when Tallis produced his Street View in ±1839, but Nock and Neave had made way for Mickham, a tobacconist, and S. & G. Hooper, stationers and printers, respectively. The street between the two bollards on the Neave trade card is Fetter Lane and it is clearly not wide enough to take a large amount of traffic. In 1838, the Public Record Office Act placed the records of the Courts of Law and their offices in a non-ministerial department under the authority of the Master of the Rolls for safekeeping.(1) Plans were put forward to build a new repository on a site between Chancery Lane and Fetter Lane, but concerns were raised about the width of Fetter Lane and the decision was taken to widen it by removing a row of houses on the east side of the lane, thereby almost completely obliterating Fleur de Lys Court with the exception of a small section on the north side. See for maps of the before and after situation the post on Peel’s Coffee House. The houses that had to make way were gradually bought up and in 1842, the Hoopers at number 179 had to move. I think they temporarily removed their business to number 203 as that is where the 1843 Post Office Directory finds them, but the property at number 45, on the exact opposite side of the street of number 179, became vacant somewhere in 1843 as Charles John Eckford went bankrupt, and that is where they ended up.

Stephen and George Hooper were the sons of another Stephen and their City freedom documents (by patrimony) give their father as a Currier. The brothers were in business together until 1848 when their partnership was dissolved. Stephen continued the business, later together with his son Stephen Wastel. They specialised as law stationers, no surprise with the Inns of Court so close by. The lawyers no doubt had need of parchment sheets to use for producing official deeds, and various advertisements for the Hoopers mention them as ‘stationers and parchment dealers’. In the 1851 census, Stephen’s son, Stephen Wastel, was found in Llandilo-fawr, Carmarthenshire. He was described as a commercial traveller in the paper line, so he may very well have been sourcing and/or selling paper and parchment for his father. The 1851 Post Office Directory just lists Stephen at number 45, but by 1856, he must have taken his son as partner, as the Post Office Directory for that year lists them as “Hooper Stephen & Son, stationrs & parchmnt dlrs”.

Not long afterwards, Stephen must have retired as the 1857 tax records name Stephen Wastel as the proprietor of number 45. An Old Bailey case of 1858, in which an employee is accused of stealing money, has Ebenezer Purcell describe himself as foreman to Stephen Wastel. He then confused the issue of Hooper’s occupation somewhat, as all of a sudden Hooper is described as a grocer of Fleet Street. Purcell claims to be the foreman of Hooper’s grocery business and as such had taken on the accused as a porter. The prisoner denied being in Hooper’s employ and Hooper testified that his main business was that of a stationer in Fleet Street, but that he also ran the grocery business of Barnum, Breddall & Co. which he had kept under that name so “that it may not interfere with [his] other business”. Purcell had the management of the grocery business with which Hooper claimed he had little to do, presumably meaning that he had little to do with the everyday running of the shop.(2) I have not found any information on Barnum and Breddall, so am not even sure whether that business was also run from number 45, or whether it was situated somewhere else in Fleet Street. No house numbers were mentioned in the transcription of the court case, so it remains unclear where exactly this grocery was. The 1856 Post Office Directory certainly does not list them, either in Fleet Street or in the list of grocers. 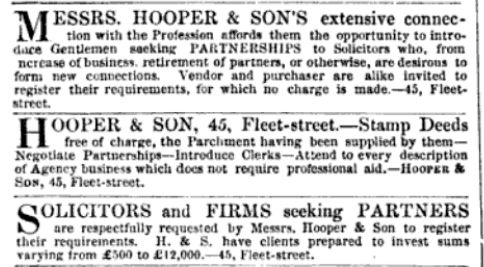 Whatever this excursion into grocery may have been, and it probably did not last very long, the 1861 census just describes Hooper as stationer, employing 10 men.(3) Stephen Wastel extended the business by not just providing lawyers with the physical articles they needed for their profession, such as stamps and paper, the firm also acted as agents or middlemen, providing matches for partnerships or clerks. And a few years later, Hooper even ventured into money lending. In 1874 or 1875, he moved the business to 69 Ludgate Hill to a building he shared with Treloar‘s carpet business. Number 45 is listed in the Land Tax records of 1875 for the “proprietors of the Scotsman’, who remained there until they moved into their new building on the corner of Fleet Street and Bouverie Street (photo here).

Advertisement in The Law Times, 2 February 1867

In later life, Stephen Wastel, and his second wife, Mathilda, resided in Deptford (1881 census), in Ramsgate (1891 census), and at Ebury Street, Chelsea where he died on 23 April 1893.(4) But the business continued after the owner’s death, at least till the early 1900s. The illustrations below show the range of services and goods they provided, from stationers’ goods and telegrams, to printing and paper making.

7 thoughts on “Stephen and George Hooper, stationers and printers”