The National Portrait Gallery has extensive information on John Sherborn and his successor James Tillyer as artists’ colourmen (see here), so I will not repeat their findings, but will concentrate on aspects they do not touch upon. In 1901, Charles Davies Sherborn published A History of the Family of Sherborn in which he sorted out all the different branches of the family. The common ancestor of Charles Davies and John, the colourman, was one Henry Sherborn of Bedfont, Middlesex. One of Henry’s sons, Thomas, had a son Charles who became a well-known engraver of trade cards, bookplates, etc. in Gutter Lane. Another son, Francis, had a son Francis, who had a son William, who was the father of John, the colourman, of Oxford Street. A third son of Henry, another Henry, had a son William, a wheelwright, who had a son Charles, an upholsterer, who had a son Charles William, an engraver, who was the father of Charles Davies who wrote the family history. John Sherborn’s later partner, James Tillyer, was, according to this family history, the nephew of the husband of John’s sister Elizabeth. Lost track of the family connections? Never mind, this was enough family background for now; on to the business of the oil and colourmen. 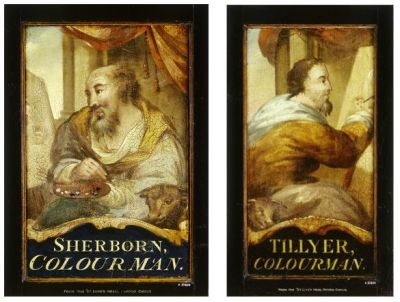 Trade signs for Sherborn and Tillyer (Source: Museum of London)

Some Old Bailey cases involved the shop of Sherborn, and although they are not terribly exciting in themselves, they do tell us more about the material that artists could buy there, about the way the business was run, and who worked there. In 1831, for instance, one of the porters, William Thompson, is accused of embezzlement. The chief cashier, Alfred James Fowler, testifies that Thompson went round to customers in the morning to collect orders, which he was then supposed to deliver in the afternoon. Any money he received as payment was to be handed to the cashier, to the other clerk, or to the shopman. Fowler was asked how he knew that the missing money was not handed in to one of the other employees,and he said that he knew because the payments were not entered in the books.(1) In 1838, James Revell, Sherborn’s shopman, testified that one George Deane, whom he knew to be the servant of one of their customers, asked for 12 lbs of shellac and 2 lbs of white gum. As the customer, a brushmaker by the name of Frinneby, always bought large quantities, he was allowed credit and the goods were therefore given to Deane without any suspicion. It only became clear later that Deane was no longer working for Frinneby and had not been sent by Frinneby to get the goods from Sherborn.(2) 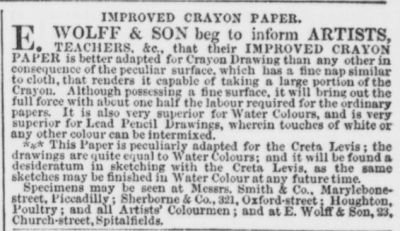 Advertisement in The Athenaeum 11 November 1848 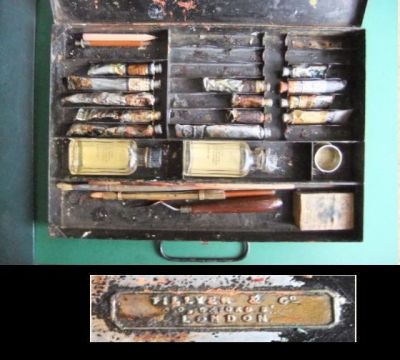 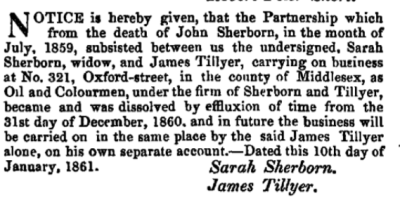 From early 1861 onwards, the business came solely into the hands of James Tillyer when Sarah, the widow of John Sherborn who had died in 1859, withdrew from the partnership. The census of 1881 shows George Smith and William E. Martin, shopmen, and Ellen A. Johnson, domestic servant, living above the artists’ shop at number 321, which was situated on the south side of the street, close to Regent Circus. The shop had come up for sale in 1874 by order of the High Court of Chancery “in the matter of re Sherborn’s estate, and in a cause of Slous v. Holgate, 1873, S., 97”. Do not ask me what that litigation involved, I do not know, but the notice about the sale in The London Gazette of 5 May 1847, gives particulars about the building.

The freehold business premises known as No. 321, Oxford-street, and also the following premises in the rear of the above premises, held on lease from the Crown, viz.: – Warehouses, stabling, and coach-house, situate on the north of an enclosed private yard, known as Fox and Hounds-yard, and having a separate entrance, the whole covering a total area of about 2,480 square feet. These freehold and leasehold properties communicate internally, and are let upon a lease to the same tenant for an unexpired term of 21 years from 1st January, 1861, at a rental of £300 per annum, the tenant also paying the ground rent. 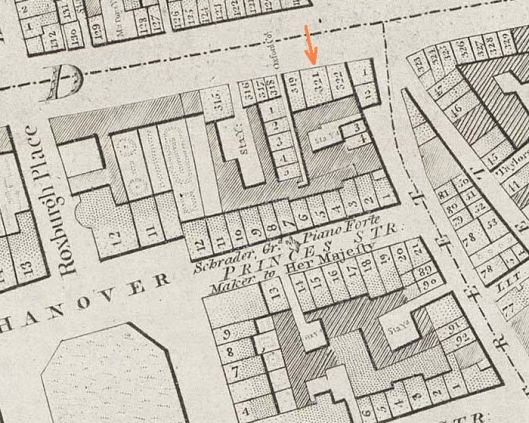 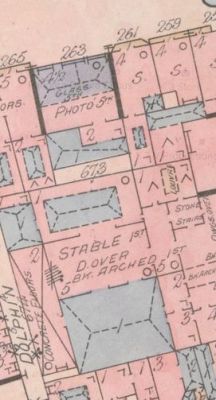 Horwood’s 1799 map (above) shows the stables behind number 321. In the hundred years between the publication of that map and the sale, the yard had been filled with outbuildings, allowing for the interconnection between the various buildings mentioned in the London Gazette. The 1886 insurance map by Goad (left) shows how much of the yard had disappeared, although the stables are still mentioned. As we saw above, the lease ran out on 1 January 1882 and Tillyer moved the shop further west to 430 Oxford Street. Do not confuse the 321 Oxford street premises of this post with the later Lyons shop at that number, because in 1881 the numbering in Oxford Street changed and what was 321 became 263. Besides that, the houses on the south side of Oxford Street were given an odd number, so number 430 must be on the opposite side. It was to be found much further west, between Duke Street and Orchard Street. At the time of the Tallis Street View this used to be number 186, the property of Webb, a straw bonnet maker. Nowadays, the whole block between Orchard Street and Duke Street is covered by Selfridges, although when the department store opened in 1909 it was only half as big, ‘only’ covering the east side of the block. In a picture of the opening, you can still see number 424 hanging on for dear life, so Tillyer’s shop, being further west, must have survived the first onslaught, although it was only a short reprieve as by the 1920s Selfridges had covered the whole block (more information here). James Tillyer himself had died at Craven House, Ealing, in 1883. The executors of his estate were his widow Elizabeth Honnor Tillyer, a George Tillyer, retired farmer, and Arthur Lasenby Liberty of 142 Regent Street.(3) Yes, indeed, the founder of Liberty’s, but that is another story. 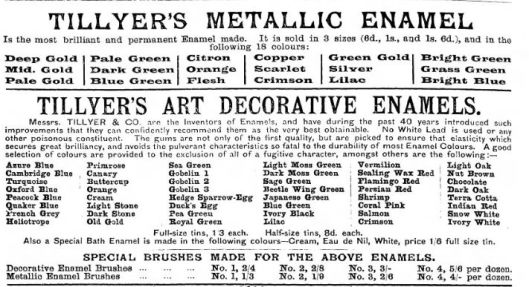