In a previous post, we saw that the front of number 12 Wigmore Street was covered in scaffolding and that the date for the building work was given as 1820 in Walford’s Old and New London (vol. IV, p. 438). That date, however, could not be right. The house next to number 12 is clearly showing the name of Hetley, glass shade manufacturer, and number 14 is the property of Crace, the interior decorators. Frederick Crace only moved to 14 Wigmore Street in 1827 and in the Tallis Street View of 1839, number 13 was occupied jointly by Hopper, a sculptor and Daniell, a dentist. These neighbours were still there when the census was taken in 1841. The Craces remained at number 14 the rest of the century, Daniell could be found in Wigmore Street till 1843, and Hopper till his death in 1844. Only in the 1851 census do we see Henry Hetley appearing as the occupant of the premises, so he must have moved in sometime after 1844. We can date his appearance in Wigmore Street more precisely to later that decade as the Post Office Directory of 1848 does not yet list him. Hetley and his family probably moved in between October 1848 and April 1850 as the address given in the baptism record of daughter Ellen May is 71 Great Portland Street, but for the next child, Elizabeth, it is 13 Wigmore Street.(1) The Hetleys were certainly still there when daughter Kate was born in 1857, but by 1861, they were living in Islington.(2) Number 13 is then occupied by Alexander Stewart, a merchant. So, the scaffolding is most likely from the 1850s. 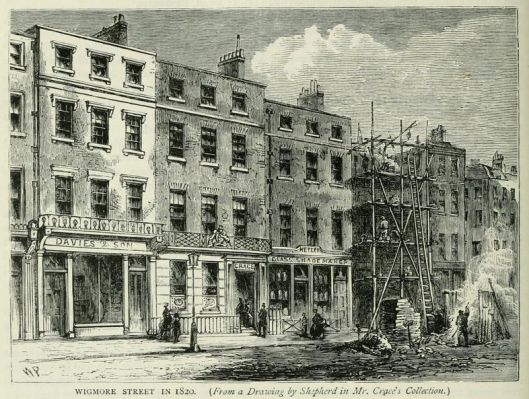 On to the occupants of number 12 to see if we can work out what happened in the 1850s. Tallis gives J.C. & J. Field as the occupants of number 12; that is: John, Charles and John Field, wax and tallow chandlers. The gentlemen were members of a family that had been in the business of making candles and selling wax and oil since at least 1642 when a Thomas Field founded the firm in Lambeth. Throughout the generations the names of John and Charles keep appearing, so it is difficult to work out exactly who is hiding behind the initials of the firm in any particular year, especially after c.1830 when they decided to leave the name as it then was, irrespective of whoever ran the firm. We will not go into the genealogical details, but will concentrate on the business itself. Their factory was always on the other side of the river in Lambeth and the Wigmore Street address was just a convenient outlet for their wares. In the 1841 census, John Field, a boy of 15, is listed as living at Wigmore Street as wax chandler, but he may very well have been a bit older as the 1841 census is notoriously imprecise as regards age. The rest of the family were living in Upper Marsh, Lambeth.

Advertisement from The Morning Chronicle, 1 December 1821

The Fields had been trading from Wigmore Street since the early 1820s and continued to do so, according to Graces Guide, until 1861. The last advertisement I found for the Fields that mentioned 12 Wigmore Street is from 29 October 1857.(3) From the mid-1840s, the Fields shared the Wigmore Street house with Isaac Sheffield, a dentist, originally from Cumberland. Isaac used to have his practice in Museum Street – he can be found there in the 1843 Post Office Directory – but he must have moved to Wigmore Street before 1848 as the next Post Office Directory finds him at number 12. It is unclear whether the Fields remained living in Wigmore Street after Sheffield moved in, or whether they just continued to have their shop there. They are certainly not mentioned in the 1851 census for the property. 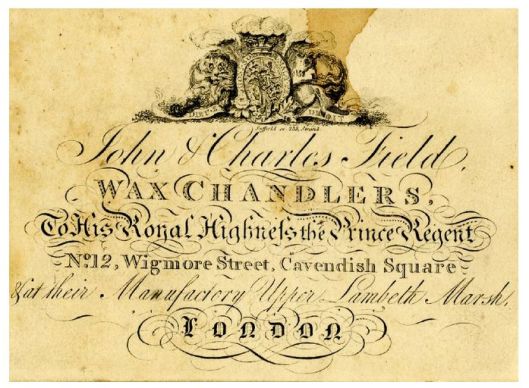 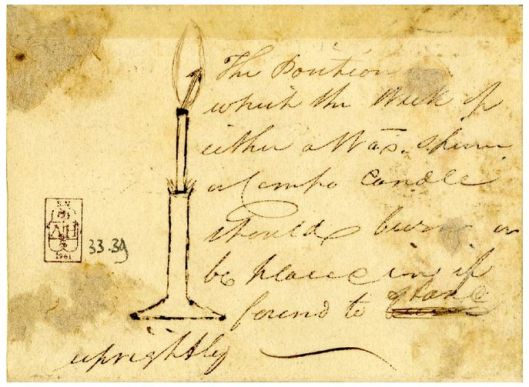 The trade card above must date from somewhere between 1820 and 1830. The advertisement shown for floating lights names J. and C. Field at Wigmore Street in 1821, but by 1830, another J. had been added to the name and the firm was henceforth J. C. & J. Field. The reverse of the card shows a drawing of a candle and stick with a text I cannot quite make out, but which explains something about the wick and it being upright.(4) It shows – assuming it was a Field who wrote it – that they were always trying to improve on their products and in 1865, for instance, they registered a design for a lighting wick or taper, to be called “Field’s Lighting Wick”.(5) Their factory in Upper Marsh grew and grew and, as can be seen from the Ordnance Survey map of 1892-95 below, eventually took up all the available space between Upper Marsch, Royal Street and Canterbury Music Hall. In 1941, they moved to Wimbledon and were eventually absorbed in larger conglomerates. 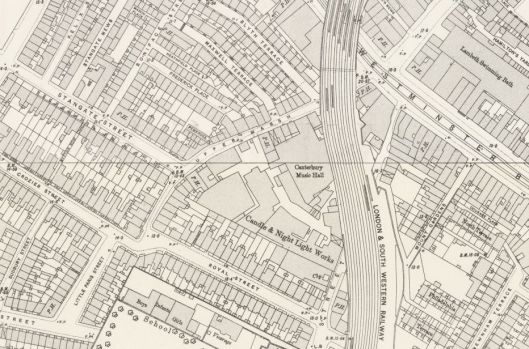 A few more advertisements for the Fields can be found at the end of this post, but first back to 12 Wigmore Street where the changes in occupation described above can perhaps explain the scaffolding; did the Fields alter the building to separate Sheffield’s part of the building from their own? Possibly, although Tallis, in his picture of the building, already shows two entrances on either side of the shop window. But there is another possible explanation: on Sunday 9 November 1845, the Field family went to church and shortly after they had left, the servant who had stayed at home smelled something burning and when she went upstairs to investigate found the place filled with smoke. She raised the alarm and fire engines rushed to the scene. When a fireman was inside the building to assess the situation, there was an explosion in a closet which threw him backwards. It turned out that the fire had started in a closet where rocket cases were stored which somehow ignited. Why they were kept there is not explained in the newspaper report. The furniture in the parlour was destroyed, along with some paintings and the damage was estimated to be £200. According to the paper, Field was insured with the Westminster and Phoenix Fire Offices.(6) If the rebuilding was delayed because of insurance problems, or because the Fields were trying to decide on what to do with themselves after the fire, it could be that the scaffolding was up in 1848 when Hetley moved in next door. Or, I am talking rubbish here and the reason for the scaffolding had nothing to do with any of these changes, but was up in the 1850s because the building needed some TLC. 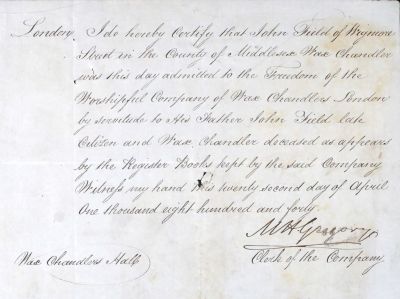 Whatever the reason for the scaffolding, Sheffield had his dentistry at number 12 from the mid-1840s to somewhere in the early 1860s. He most likely moved in after the fire as his name is not mentioned in the newspaper report on the exploding closet. The 1861 census still lists Sheffield’s wife at number 12. Her parents were there as well and so was her brother who is a “dentist’s assistant’. Isaac himself was to be found in Carlisle with his sister Mary. An advertisement in The Newcastle Courant explains the situation: John Sheffield, Isaac’s brother and also a dentist, informs his customers that he is handing over his practice in Carlisle to his nephew, J.G. Robinson, and he also takes the opportunity of this announcement to say that Mr. Sheffield of 12 Wigmore Street would continue to make his periodic visits to Carlisle at Easter, in September, and at Christmas.(7) The 1861 census was taken on 7 April and Easter fell on 31 March that year, so close enough for Isaac to be away from home for one of his tri-yearly visits to Carlisle. Sheffield is listed at 2 Stratford Place in a list of members of the Odontological Society of London published at the end of 1862, so he must have moved fairly soon after April 1861. He died in 1881 and was buried at Carlisle. 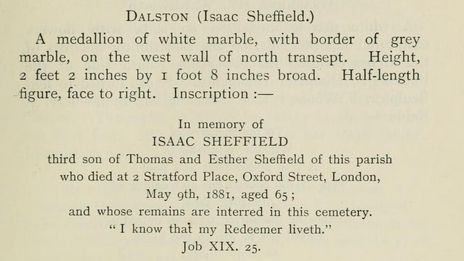 Some advertisements for J.C. & J. Field: 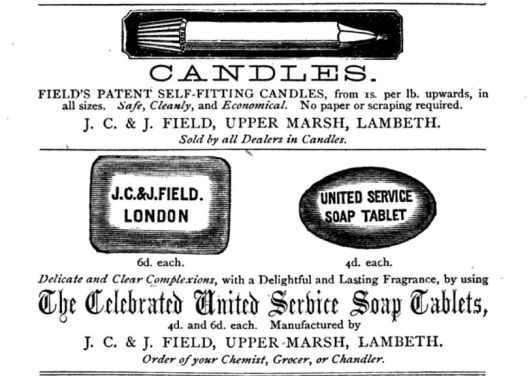 1867 advert from The Archer’s Register 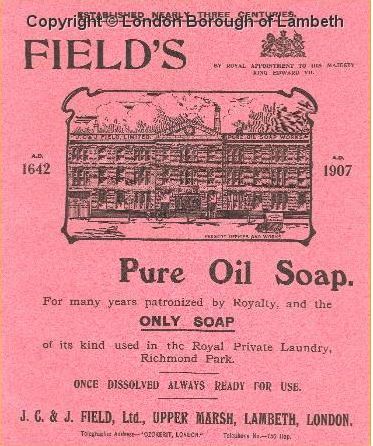 1907 advert from The Laundry Journal Diary (© London Borough of Lambeth)