In 1806, William Benning, the son of James Benning, surgeon of Barnard Castle, Durham, was apprenticed to Joseph Butterworth, a bookseller of 43 Fleet Street.(1) Butterworth was the son of John Butterworth, a baptist minister of Coventry, and was very active in the field of philanthropic and christian causes. He was also the M.P. for Coventry (1812-188) and Dover (1820-1826). More on Joseph’s political career can be read here. Joseph’s nephew Henry came to work for him, but set up on his own in 1818 at 7 Fleet Street. More on him in a forthcoming post. In 1813, Joseph’s own son, Joseph Henry obtained his freedom of the Stationers’ Company by patrimony and the bookselling business was henceforth called Joseph Butterworth and Son. They specialised in law books and were frequently mentioned as ‘law booksellers’ in various directories.

William Benning must have reached the end of his apprenticeship after the customary seven years in 1813, but he continued to work for the Butterworths and when Joseph Butterworth died in 1826, he left to his “clerk William Benning one hundred pounds as a token of my regard”. Son Joseph Henry was not left the bookshop outright, but it was given into the hands of executors in trust for Joseph Henry “for and during the term of his natural life provided he shall so long continue to carry on the trade of bookseller”. As soon as Joseph Henry ceases trading or died, the shop was to be sold. No reason is given why the son does not inherit the shop outright, but he was destined to only continue the business for another two years as he died in Genoa in late 1828.

Advertisement in The Morning Chronicle, 14 June 1827

The death of the elder Joseph may have prompted Benning to seek his own fortune elsewhere as we find him as law bookseller at 52 Fleet Street in an 1827 advertisement.(2) He is still there in February 1829(3), but later that year, a notice in The Law Relating to Friendly Societies saw Benning and one Robert Saunders in partnership at 43 Fleet Street. An advertisement at the end of that year, specifically names then as ‘successors to the late J. Butterworth and Son”.(4) Saunders and Benning presumably bought the business from the executors of Joseph Butterworth’s estate after the death of Joseph Henry.

Although Benning had lived at 43 Fleet Street when he was working for Butterworth, and later at 52 Fleet Street, he moved at some point to Walthamstow where the 1841 census was to find him with his (second) wife Jane and children Jane, Elizabeth, Ellen, Francis and Albert.(5) The eldest sons William Granger (born September 1827) and Charles (born 11 March 1829) are not at home, but at Hall Place School, Bexley. Ten years later, William, by then a widower, can be found at Wood Park, Hampstead. Another son had been added to the list of children, Edward, and daughter Jane had by then married William Pritchard, a proctor, and had two children of her own. The two eldest boys are once again away from home; William is visiting the Watsons, a stone merchant’s family in Thorpe, Norwich, and Charles was visiting the Christies in Bouverie Street where one Harriet Abbot just happens to be visiting as well. Charles was to marry her the following year. One of their sons, Ernest Bradley, died in a boating accident and has been given a plaque of honour in Postman’s Park (see here).

The partnership between Saunders and Benning is dissolved in February 1844 and the business is continued as Wm. Benning and Co.(6) No indication is given who this ‘Co.’ is, but I imagine it was son William Granger who is listed as a law bookseller or publisher in the 1861 and 1871 censuses. William Granger must have taken over after his father’s death (date unknown), but things did not always go according to plan. In 1881 and 1891, William Granger is given as solicitor’s clerk, but in 1901 he is called a retired bookseller. He died in 1902. The change in career probably had something to do with his bankruptcy in 1865.(7) He must have left 43 Fleet Street some time before his bankruptcy as he is consistently given as of “no. 4, Albert Road, St. John’s-villa, Upper Holloway, but late of no. 5, Great Queen’s Street, Lincoln’s Inn Field”.

A search for the next occupant of 43 Fleet Street brought me to William Spottiswoode who had already printed a lot of the publications of (Saunders and) Benning. Bible printers G.E. Eyre and W. Spottiswoode, printers to the Queen’s Most Excellent Majesty, seem to have taken over number 43 for their Bible warehouse in 1860. They are mentioned at number 43 in The Literary and Educational Year Book for 1860 and in the appendix of the Sixth Report of the Postmaster General for 1860.

The building at number 43 had a bit of a make-over in 1827-28. Plans by John Buonarotti Papworth exist in the RIBA library and they show the front elevation which accords well with what Tallis showed in his 1839 edition. In the 1847 Tallis edition, the windows seem to have been altered again with rounded tops. But what is most interesting is the Papworth plan for the inner oval room. If you compare that with the 1886 Goad insurance plan, you can see the daylight window at the top of the room consistent with that on Papworth’s plan. The doors shown on Papworth’s plan are presumably the ones leading to Mitre Court at the back of the building. The building as the Bennings knew it, is no longer recognisable as buildings have been brought together to form the larger premises next to Hoare’s bank. 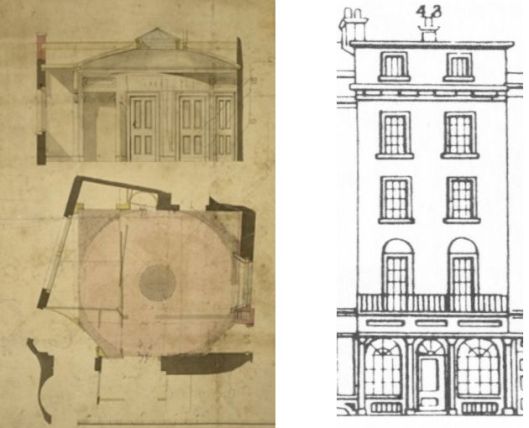 (1) The will of James Benning is transcribed on the Will Transcriptions Website here.
(2) The Morning Chronicle, 14 June 1827.
(3) The Morning Chronicle, 7 February 1829.
(4) The Derby Mercury, 25 November 1829.
(5) His first wife was Alice Whitfield whom he had married 21 March 1820, but she died that same year (thanks go to Catherine Ryan for this information). There are more links between the Whitfields and Bennings which will be explored in the posts on William Whitfield of 44 Old Bond Street and John Whitfield of 16 Lamb’s Conduit Street.
(6) The London Gazette, 5 March 1844.
(7) See for instance The London Gazette, 2 June 1865.