The story of the Sykes family is a complicated one, not in the least because the generations seem to have favoured the same names for their sons: Richard, John and William were by far the most popular, but for this post I will just concentrate on one William. 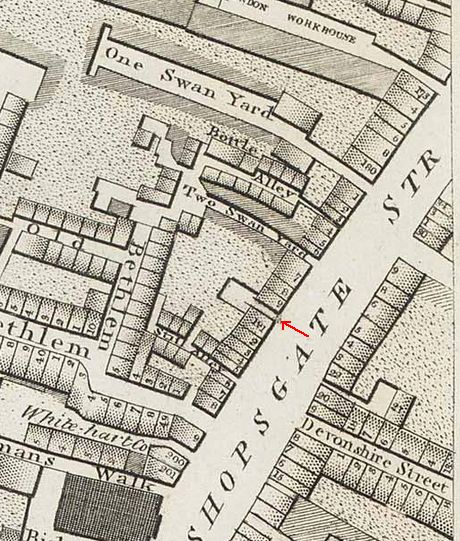 William was made free of the Innholders’ Company on 13 September 1822 by patrimony. In the freedom papers his father’s name is given as John and William is said to have been born in 1800, but that was in fact 1799.(1) What happened next and when it happened is not entirely certain, but at some point, William starts a waggon service from the New Catherine Wheel at numbers 189-190 Bishopsgate Without. Tallis just gives the property number 190, jumping straight from number 188 to 190, but judging by Horwood’s map, number 189 was the house on the right in the elevation at the top of this post and number 190 was situated behind the large entrance gate on the left. What is not clear is whether this New Catherine Wheel actually functioned as an inn, or whether it was just a name given to the transport office, using the yard of what was once an inn to store the waggons. Until the end of 1836, William had been, at least for the carrier service to Bury St. Edmunds and Norwich, in partnership with Frederick Cook of Bury.(2) 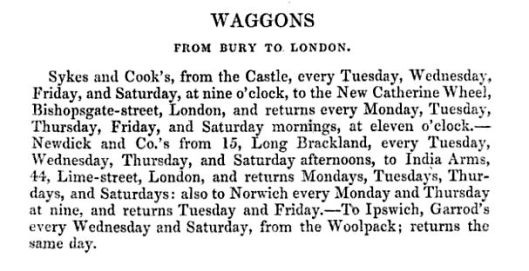 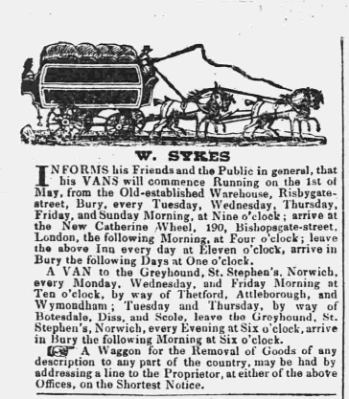 The end of the partnership did not mean the end of the carrier service to Bury and Norwich as regular advertisements in The Bury & Norwich Post & East Anglian testify. The one on the left is from 25 April 1838. The 1841 census only shows a watchman, one Henry Tyler, at what is described as “Sykes yards”, but no mention is made of any servants which one would assume to be living there if Sykes had had a working inn. A William Sykes, but that may very well have been his uncle, with his wife Lucy and their children Joseph and Hannah, lived across the street in Catherine Wheel Alley. Where William the carrier lived, remains uncertain.

To complicate matters, the Land Tax records for Bishopsgate Without show William Sykes as the one paying the tax for the “house & stabling” across the street, that is for the Old Catherine Wheel Inn, suggesting that the William at the New Catherine Wheel must just have rented the yard and office at number 188-190 as his name does not appear in the Land Tax records. The only indication in the tax records that he was there is in 1844 when the entry is suddenly “late Sykes – waggon office”. This accords well with an advertisement in the The Bury & Norwich Post & East Anglian of 14 February 1844 by E. Salter & Co. who announce that they have taken over the New Catherine Wheel Waggon Office for their luggage service. For the transport itself, they will be using the Eastern Counties’ railway between Colchester and Bishopsgate. Their advertisement appropriately shows a train rather than Sykes’ old-fashioned waggon. 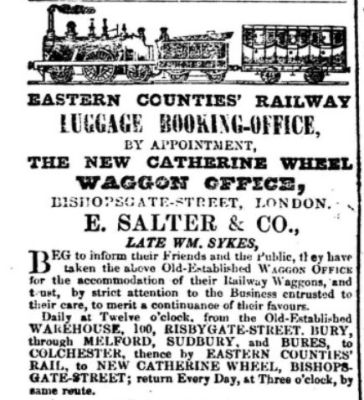 So, William Sykes the carrier must have died before February 1844, but I have – so far – not found any reference to his burial or a will, so this is where the story for William will have to end, but not for the carrier office. The 1839 Pigot’s Directory already gives E. Salter as carrier to and from Chelmsford, although at that time not yet to the Catherine Wheel, but to the White Swan in Whitechapel. And White’s History, Gazetteer and Directory of Essex of 1848 gives an Ephraim Salter, omnibus proprietor, of Woodford, Essex, who provides the carrier service between Braintree and London. The directory says that Salter leaves from the Wool Pack in Braintree, but not where he is going to in London, so whether that was the New Catherine Wheel office is unclear. At some point in 1848, however, Salter was described in The London Gazette as “of Bishopsgate” and in partnership as carrier with Hillary John Banerman who went bankrupt, but what became of Salter after that is not entirely clear. There was an Ephraim Salter in Essex who ran an inn in the 1851 and 1861 censuses, and he may very well have been the carrier, judging by a notice in The London Gazette of 5 August 1853 stating that the partnership in the business of contractors, carriers, and stage carriage proprietors between Salter and one McNamara was dissolved. Salter is here described as of the Bald Face Stag public house, Buckhurst Hill, Chigwell, but whether he was one and the same as the New Catherine Wheel proprietor is a matter of conjecture.

Sykes and Salter were, by the way, not the only ones using the New Catherine Wheel as their London destination. The 1839 Pigot’s Directory also lists one Elborne and E. Bullen for Royston in Hertfordshire; James Fisher for Hertford; T. Deacon for Hoddesdon; W. Biscoe for Buntingford (Herts); and William Low on Saturdays for Chelmsford, all travelling from the New Catherine Wheel. This is all I have been able to drag up for 189-190 Bishopsgate Without, so this is where the story for this address stops. 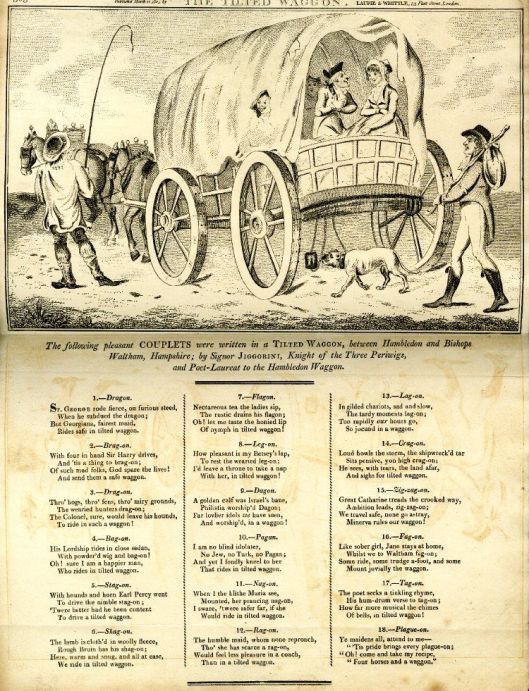