Catherine Glendinning was the widow of William Glendinning who seems to have started his career in 1795 when he advertises number 1 of the Mathematical and Philosophical Repository.(1) This journal was established by Thomas Leybourne, a teacher of mathematics at the Royal Military College, and was to run for 40 years. Leybourne’s output was always published by Glendinninig to whom he was apparently greatly attached.(2) Glendinning at that time had his shop at 9, Charles Street, Hatton Garden, but was to move somewhere around 1798 to the opposite side of the street, the corner of Charles Street and Hatton Garden. Tallis mistakenly has the number 26 above the elevation (see top of post), but Glendinning’s shop was known as number 25. The confusion no doubt arising from the fact that the shop on the opposite corner was also given the number 25 by Tallis, although Horwood gives that house as 7, Charles Street. In 1820, Glendinning has to testify in a case read at the Old Bailey and he explains that he has his shop on the corner of Hatton Garden, with one door in Charles Street.(3)

At the end of November, 1836, a terrible storm raged over the capital causing widespread damage. And London was not the only place to suffer from the storm. A Dutch book commemorating this event and another storm following on Christmas Eve also spoke of severe damage.(4) The author compared the storm of November 1836 with the one that struck in November 1800, which also came from the south-west and caused extensive damage, not just in the Netherlands, but also in Belgium, France and Germany. The damage he relates for 1836 consists of falling chimneys, roof-tiles and trees, and damaged windmills, houses and churches. In Amsterdam, the lead roof covering of some buildings was stripped off, crashing down onto the people below. Water in lakes and rivers was in turmoil and swept over the dykes, inundating the land. The storm has made it into Historic Storms of the North Sea(5) and is reported to be the result of “an intense depression centre, about 980 mb. having crossed England … towards Denmark” on the 23rd. The winds “may have approached 100 knots”. More “frontal cyclones crossed Britain in the following days”, culminating in the storm of the 29th.

The Times of 30 November included an extensive report on the damage in London, detailing which houses had their roofs blown off, their chimneys destroyes and who was bodily harmed by flying debris. I will not copy the whole article, but here are some instances of the damage done:
– 20 trees in St. James’s Park blown down
– The roof of 4, Newton Street, Holborn “fell in with a shocking crash, burying the inhabitants of the garret”
– In High Street, Bloomsbury, Bedford Row, and Portman Square, “stacks of chimneys were blown down into the streets”
– At St. Margaret’s churchyard, the bearers of a corpse could not hold on to the coffin which crashed on the stones
– In Whitecross Street the gable end of a shop fell into the street
– At the Rosemary Branch Tavern, “the whole of a theatre built in the gardens has been blown down”
– “The ball and cross of St. Paul’s Cathedral were observed to vibrate in a fearful manner”
– etc., etc.

But, most relevant for this post, “a stack of chimneys were also blown down from the roof of Mr Glendinning’s, printer, of Charles Street, Hatton Garden”. Poor William Glendinning, 72 years old, died a month after the storm, but whether there was any direct link between the storm and his death is not known. He was buried on the 5th of January, 1837, at St. Andrew’s, Holborn. His widow, Catherine, continued the printing business and can be found on the corner of Hatton Garden and Charles Street in the 1841 census. Also living there is a young apprentice, Robert Hughes, and 60-year old agent, John Berry and various Berry family members. Also present is 30-year old Thomas Pocock and family. He is given the occupation of ‘printer’ and I think we can assume he was the one doing the actual manual labour of pulling the handle on the press. After all, Elizabeth was 70 years old by then and about to retire.

Later that census year, on 23 September, an advertisement appeared in The Times stating that Catherine was selling up and was ready to hand over the business to a successor. Who bought it is uncertain, but Kelly’s Post Office Directory of 1846 lists Charles Austin, engraver, and Daniel Hoare, bookbinders’ toolcutter, at 25a Hatton Garden. A Chas. Austin was listed at 50 Hatton Garden in the 1843 Post Office Directory as steel & copperplate printer. Was he the same as the engraver? Was the shop at number 25 split up into smaller businesses? Lots of unknowns, but what is known is that Catherine Glendinning was to enjoy her retirement for a number of years and died in late November 1848 at Upper Copenhagen Street. She was buried 3 December at St. Mary, Islington.

Below some of the print work Glendinning produced: 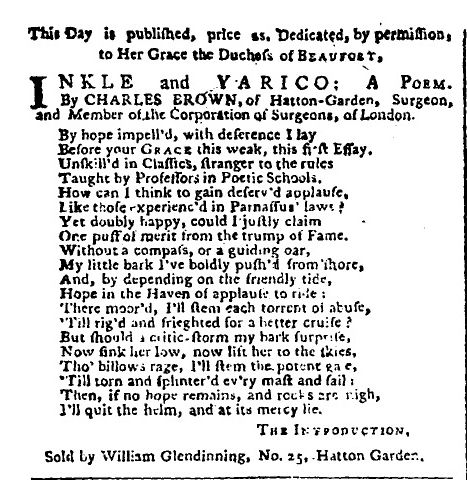