John Colley, the son of Richard Colley, a yeoman of Mitcham, Surrey, had been apprenticed in 1808 to his uncle Philip Lawton, Citizen and Barber of Bishopsgate Street.(1) Colley obtained his freedom of the Barbers’ Company in 1815 and two years later, his son John Lawton Colley was born.(2) On the baptism registration for his son, Colley is listed as perfumer of Bishopsgate Street, although no house number is given. He may even have taken over Philip Lawton’s business, but that is not certain. In 1821, daughter Sophia is born, but here again, no house number given. The first time number 28 is mentioned is in 1832 when John’s wife Sarah, just 36 years old, is buried on 14 September at St. Ethelburga’s. The year before Sarah’s demise, son John Lawton is taken on as an apprentice in his father’s business.

Before we continue with the hairdresser and perfumer business, first something about the building at 28 Bishopsgate Street Within itself. Horwood’s 1799 map clearly shows that number 28 was situated next to the passageway towards Crosby Square and the elevation at the top of this post shows the passageway under the left-hand side of the Colley building. The Survey of London(3) has a sketch of the area taken from the 1894 Ordnance Survey map. The orientation is somewhat unusual, so it looks as if Crosby Square moved to the other side of Bishopsgate Street, but of course it has not. You should really picture the sketch upside down, but then you cannot read the writing so easily, so I left it as it was. I have indicated number 28 with a red arrow. Because of a corbel depicted by F. Nash, there has been some discussion whether Colley’s shop had once been used as a chapel for Crosby Hall or Crosby Place as it was also called, or whether the corbel had already been part of the house that stood on the site when Cataneo Pinelli, a Genoese merchant, lived there before Crosby acquired the lease in 1466. Whatever its former function, it seems that the corbel in the form of an angel could still be seen when Colley had his shop at number 28. I am quoting the Survey: 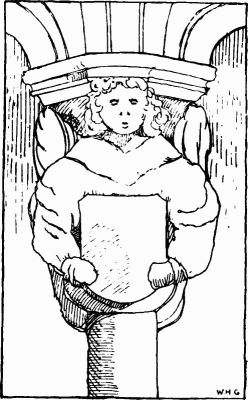 Corbel in the form of an angel

“Nash and Davis have given a plan of the room showing a door and details of the curious double window in its south wall, and Blackburn corroborates with a description of the window which he saw still in situ in the parlour of a Mr. Colley’s house, erected on this very place. The arch mouldings of the two lights of this window rested, in the centre, upon a corbel carved in the form of an angel, of which Nash and Davis give a sketch. This corbel was evidently secured by Mr. Lewis N. Cottingham for his famous museum in the Waterloo Road, since the catalogue of the sale of the contents in 1850 has the following: ‘Lot 992. A moulded and panelled corbel from Crosby Hall; and one of the same character terminating with an angel supporting a shield’.”(4)

In December 1824, The Ladies’ Monthly Museum, a fashion magazine, mentioned John Colley as the inventor of a particular head-dress in which “the hair worn in very full curls, to meet on the fore-head; equally full at the top as at the sides. The hair is dressed in large clusters of small bows, or, partly, puffs, and rolled at the back of the head, on the Grecian model”. The walking dresses to go with this particular hair style were designed by a Miss Pierpont and shown in an illustration in which the lady in the white dress assumedly has her hair done up in the style invented by Colley.

Ten years later, Colley’s was listed in an advertisement in The Spectator as the address where British lavender water manufactured by Henry Capper at the British Perfume Manufactory was being sold. So far, so good, but Capper’s lavender water was not the only variety of that scent sold by Colley’s. That same year, Messrs. Delcroix of Regent Street, were granted an injunction against three perfumers who sold scented water pretending to be that of Delcroix and Co, while in fact it was just a fraudulent copy. Colley was one of the perfumers “having the appearance of respectability”, but being in fact common swindlers trying to make money imitating Delacroix’s packaging – or so Delacroix claimed anyway. The bad publicity does not seem to have harmed Colley as he happily kept his shop running for quite some years after this incident. 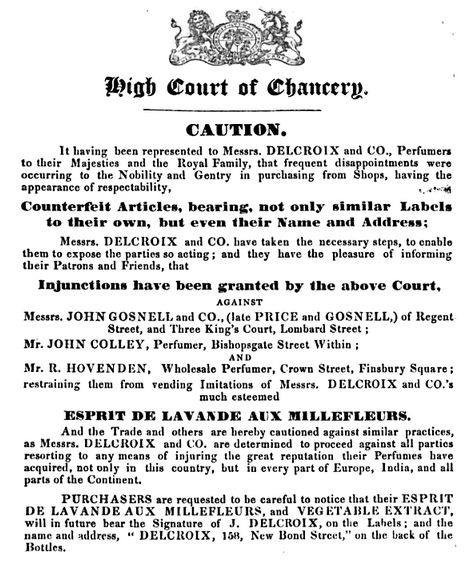 Colley advertised in the Street View booklet with Sicilian Cream, supposedly good for your hair. John Colley and his son John Lawton had entered into a partnership which was dissolved on the 17th of June, 1847. I guess because John wanted to retire, but the notice in The London Gazette does not actually say so. The 1851 census does, however, give John, his second wife Mary and their two children Philip and Reginald Edward at Gypsy Hill, Lambeth, with John described as “landed proprietor”. John died in February 1855 and was buried at Norwood Cemetery. John Lawton could still be found at 28 Bishopsgate Street after his father retired from the business and in 1849 still advertised the Sicilian Cream in The Era of 28 January, no longer just good for your hair, but even preventing baldness. The advertisement refers to Colley’s “thirty years’ experience as a hair cutter” without mentioning the fact that the thirty years were divided up between two generation, albeit of the same family. John Lawton married Cornelia Dear in 1845(5), but the marriage appears to have been childless. The 1851 census sees John Lawton and his wife at 28 Bishopsgate as a hair cutter, employing 6 men. Cornelia seems to have continued the shop after the death of John Lawton in 1859(6) as the 1861 census still finds her at Bishopsgate as perfumer, but by 1871, she had moved to Croydon and had apparently retired. She died in 1886.(7) The shop at number 28 was taken over by Joseph Eglese & Son.

———————-
(1) National Archives, Kew: PROB/11/2237/208. John Colley is named the executor in Philip Lawton’s will, dated 10 October, 1854, although that commission is revoked in a codicil dated 4 September 1855. Why that is so, remains unsaid. The other executor is named as Joseph (Cox) Dear. See also footnote 5 for the Dear family.
(2) John Lawton’s mother was called Sarah, but I have not found a marriage registration that conclusively links a Sarah to the John Colley of Bishopsgate. There are a few possibilities, but none that point without doubt to the correct John Colley.
(3) Survey of London Monograph 9, Crosby Place. Originally published by Guild & School of Handicraft, London, 1908. Original online here. Transcription available via British History Online here.
(4) Nash and Davis are referred to in the bibliography of the Survey as: MS. Notes and Sketches of Crosby Hall by Frederick Nash and Valentine Davis, in the Library of the Royal Institute (1804) of British Architects. And Blackburn is a reference to An Architectural and Historical Account of Crosby Place. By Edward L. Blackburn. 8vo. London, 1834.
(5) He had married Cornelia on 12 July 1845. Her father was given as Joseph Dear, gentleman. Interestingly, a year earlier, John Lawton’s sister Sophia married the reverend Robert Dear whose father was also named Joseph. Were they brother and sister? See footnote 1 for the Joseph Dear who was named the executor of Philip Lawton’s will. Although it is tempting to think that all these Josephs were one and the same person, that may not be the case, although a family relationship is certainly indicated.
(6) England & Wales, National Probate Calendar (Index of Wills and Administrations), 1859. He was buried 16 March 1859 at Norwood Cemetery. The service was conducted by Robert Dear, his brother-in-law.
(7) England & Wales, National Probate Calendar (Index of Wills and Administrations), 1886. She was buried 7 August 1886 at Norwood Cemetery.

You may also like to read about Charles Snelling, one of Colley’s apprentices who had his shop in Wellington Street and later in Gracechurch Street.