Unfortunately, the depiction of number 35 Fenchurch Street suffers badly in my facsimile copy of the Street Views from finding itself in the crease between the two halves of the booklet, so apologies for the imperfect elevation at the top of this post.

Richard Suter & Annesley Voysey, architects, had their office at number 35 Fenchurch Street, but they did not have it all to themselves as they shared the premises with W.C. Franks, a tea broker, who will get a separate post some other time. The earliest mention I found of Richard Suter in Fenchurch Street is in 1832 when he is listed at that address in a list of contributing members of the Society for the Propagation of the Gospel in Foreign Parts. It says that he had been a member since 1829, but that does not mean he was already at 35 Fenchurch Street in that year.(1) In fact, that seems unlikely as the Sun Fire Office records give Messrs. Short and Co., merchants, as paying the insurance premium on the premises in May 1830. The Directory of British Architects 1834-1914 give the year 1827, but I do not know on what evidence. When Suter and Voysey became partners is also uncertain, but they had known each other since at least 1825 as Suter is named as one of the executors of Voysey’s will which was dated 22 July, 1825. The address given for Suter in the will is Suffolk Street, Southwark. Voysey then lives at Conway Street, Fitzroy Square.

In 1837, Voysey travelled to Jamaica where he was to design and build a church for Port Antonio. How he got involved in this project is not clear, but it may well have had something to do with the Society for the Propagation of the Gospel in Foreign Parts to which he was also contributing. Unfortunately, on 5 August 1839, before the work on the church was completed, Voysey died of fever, just 45 years old.(2) There is a copyrighted image of the memorial tablet for Voysey in the Jamaican church which you can see here.

It took a little while for the message of Voysey’s death to reach London, so no wonder that the firm is still called Suter & Voysey in the Tallis Street View. Voysey’s will was proved almost a year after his death in London.(3) Richard Suter had to continue the business on his own after the death of his partner. In 1841, Suter, his wife Ruth Ann, their two sons, Richard George and Andrew B., nephew Edward Dyer Suter, a clerk and two female servants could be found in Fenchurch Street, but ten years later, the family has moved to 3 Upper Woburn Place. Forward ten more years and Richard, by now a widower, is living at Castle Hill, Cookham. He remarries in 1862 to Elizabeth Ann Pocock. They remain living in Cookham and that is where Richard dies on 1 March 1883. One of the executors was Edward Dyer Suter, the nephew who had been living with the family in 1841 and who ran the Infant Book Depository at 19 Cheapside.(4)

And what about the Fenchurch business? The 1843 Post Office Directory gives Suter at 28 (in stead of the earlier no. 35) Fenchurch Street and he certainly still had his office there in 1863 when he confirms that he has surveyed the Vicarage of Winslow, Buckinghamshire.(5) The Directory of British Architects 1834-1914 gives yet another number, 23, for the year 1868 and they do the same for son Richard George in 1869, so whether the architects’ office moved once again, or whether it was just the numbering that changed is unclear. In 1849, the Gentleman’s Magazine wrote that the first stone was laid on 23 June for the new almshouses of the Fishmongers’ Company in Wandsworth. They were to replace the old ones at Newington Butts and were to be built at East Hill. “The almshouses, forty-two in number, will form three sides of a quadrangle, each side about 320 feet long, and one of which will, with the chapel and school in the centre, look upon the river. They will be built in the Elizabethan style from the design of Mr. Richard Suter, architect of Fenchurch-street”. 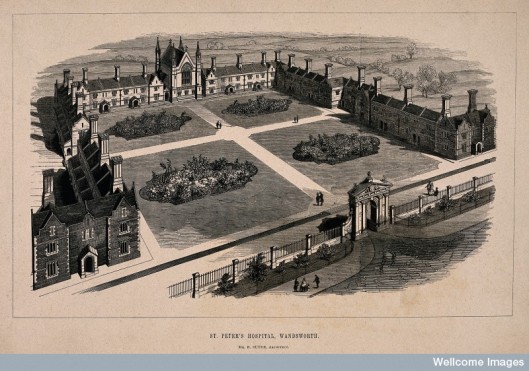 But Annesley Voysey and Richard Suter were not the only ones in their families to become architects. The son of Richard Suter, Richard George Suter, followed in his footsteps before emigrating to Australia and becoming a minister of the Catholic Apostolic Church there.(6) Voysey’s son, Henry Annesley, also became an architect, but he unfortunately died even younger than his father, just 29 years old. The next generation also produced an architect, grandson Charles Francis Annesley, son of Annesley’s religiously wayward son Charles. Charles Francis Annesley became the most famous of the lot, not just for the designs of his buildings, but also for his applied art, such as furniture, wallpaper etc., very much in the style of the Arts & Crafts movement (biography here). But who knows to what architectural heights grandfather Annesley might have soared had he not died in his prime in Jamaica.