On the 4th of September 1839 the reverend Joseph Romilly wrote in his diary that he got up early and went shopping in a cab. He bought a tea-tray, arrowroot, books, pearl needlecases for his sisters Lucy and Margaret and purses and penknives for the maids. He also went to Gundry’s to fetch some shoes for Margaret.(1) Gundry’s, the shoemakers, were mentioned more often in literature, such as when Mr. Worthington shows off his little daughter to his visitors and tells her to lift her frock a little “to show your beautiful blue shoes, from Gundry’s”.(2)

Gundry and sons had their well-known shoemakers’ shop at 1 Soho Square from the 1830s to the 1880s. As can be seen in the elevation above this post and in the maker’s label above, they were shoemakers to Queen Victoria and the late King William IV’s widow, Adelaide, besides a few more miscellaneous Royals. The British Imperial Calendar for the year 1844 mentions Robert Gundry of Soho Square as one of the boot and shoemakers to Queen Adelaide, but that must have been a mistake, as Richard is the name mentioned in a partnership notice.(3) On 11 November 1843, Richard, William and Jonathan Gundry dissolve their partnership; Richard and William are to continue the business at 1 Soho Square and Jonathan is to have the shop in the High Street, Hampstead. Richard dies in 1848 and from his will, we learn that William is his son who inherits everything belonging to the business in Soho Square. William had already been living at 1 Soho Square since at least 1833. When the two youngest of his children were registered at Dr. William’s Library, the family’s address was given as 17 Weston Place, but the other children were all born in Soho Square.(4) 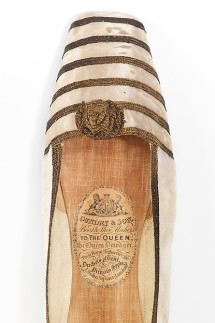 The pictures I have found for the shoes the Gundrys produced almost all seem to be ladies’ slippers rather than solid workman’s boots, but that may be because nobody in his right mind thought of keeping the down at heel boots, while the flimsy Royal slippers were considered worthy enough to keep for posterity. You can see some of Queen Victoria’s foot wear in the illustrations of this blog, but there are more, for instance at the Powerhouse Museum (here) and in the Museum of London (here).

The 1841 census records tell us very little other than the names of the family members and their occupation, but in 1851, the record is more informative and tells us that Sarah Holt, who had already been living with the family in 1841, was the shopwoman and William’s sister-in-law. William died 11 December 1860 and probate was granted to sons William junior and Alfred Andrew.(5)

While William senior had employed 44 men and 12 women in 1851, William junior was to employ 58 men, 2 boys and 12 women ten years later. Things were going well for the Gundrys. William’s brother Joseph can also be seen living at 1 Soho Square, “in business with brother” and quite by accident, on the day the census was taken, their sister Ann and her husband, Hugh Barclay, a printer, and their two young children are visiting and hence recorded on the same sheet. In 1871, William is no longer living in Soho Square, but in Hilldrop Road, Islington. Joseph and his wife are living at Adelaide Road, but the business was still conducted at Soho Square as is stated the year after the census when they announce the end of their partnership; William is to retire and Joseph to continue the business, still under the name of Gundry and Sons.(6) William died in 1876 and probate was granted to his brother Horace, architect.(7)

The family ties remained close and sister Alice can be seen visiting the other sister Ann Barclay in 1871, living with her brother Horace in 1881, with her aunt Sarah Holt in 1891 and with her widowed brother Joseph in 1911. In the 1891 census, Joseph is still described as bootmaker, but by 1901, he had retired. He died in 1912 and Alice in 1923.(8) But what about the business at Soho Square? We saw William and Joseph still there in the 1861 census, and although they were no longer living there in 1871, the business was still theirs. In that year, the premises were occupied by Thomas Molyneux, 65 years old, and his wife. He is decribed as a shoemaker in the census and presumably the manager for the Gundrys. In 1881, the widowed Jane Molyneux is still there as a housekeeper, but in 1891, 1 Soho Square is occupied by one Louisa Emily Connolly, an associate of the Royal Academy of Music & tutor, and her two sisters, which does not sound as if the building was still functioning as a shoe and bootmakers’ business. It is very likely that the ground floor of the premises were used for separate commercial purposes, as we know that in the early 20th century, both Thomas Baker and Wilfrid Voynich had their bookshop at 1 Soho Square. Voynich became an admirable medieval scholar and managed to secure large numbers of books and manuscripts from Continental libraries, among which the so-called Voynich manuscript that has so far resisted decoding. More on Voynich here. The building in the picture below at 1 Soho Square replaced the one the Gundrys occupied in 1904-5 and was designed by E. Keynes Purchase.