Adelaide Place was the broad section between King William Street and the north foot of London Bridge. It was named after Adelaide, the wife of William IV. On the west side, Fishmongers’ Hall can be found; on the east side a large building was constructed in c.1835 which was divided up into several offices. Number 5 Adelaide Place, where Waring and Moline had their office as agents for Guinness, was, according to Tallis, also occupied by a Mr. Field (first floor) and a Mr. Chadwick (second floor). Although these two gentlemen were not given an occupation by Tallis in the first lot of Street Views (±1839), they were still there in 1847 when the second batch of Street Views was published and although Chadwick still does not have an occupation, at least he is given the first name William (was he the architect John Belcher was apprenticed to?). Mr. Field is James Field, architect & surveyor. In 1847, we also find John Belcher, architect, at number 5, but Moline has disappeared from the Tallis Supplement list. Not so in reality, however, as he was certainly there until his death in 1865.

In the early 1830s, Samuel Waring, a merchant from Bristol, had the London agency for the Irish beer with his partners Tuckett and Foster at 79 Lower Thames Street. By 1834, Tuckett and Foster had been replaced by the Quaker Sparks Moline (1811-1865), at first from the Lower Thames Street address, but from 1837 at Adelaide Place.(1) Moline and Waring were related, Sparks’ grandmother on his mother’s side was a Waring and his sister was given the name of Mary Waring Moline. The partnership between the relatives did, however, not last very long. The London Gazette announced the end of the partnership as per 18 July 1838 with Moline to continue the business alone. Waring had got into financial difficulties and only narrowly avoided bankruptcy. The Guinness firm appears to have helped Waring with a mortgage on his house and disaster was averted, but the London agency was separated from the Bristol enterprise.(2)

The years from 1836 to 1840 were turbulent years for Moline. In November 1836, his father John Sparks Moline died. He was buried at the Quaker burial site at Winchmore Hill, Enfield, and the burial record gives Adelaide Place as his address and “porter merchant” as his occupation. Father and son may have been in partnership together with Waring, although the records do not make that clear. A few months later, on 2 February 1837, Sparks received the freedom of the Company of Curriers by patrimony. 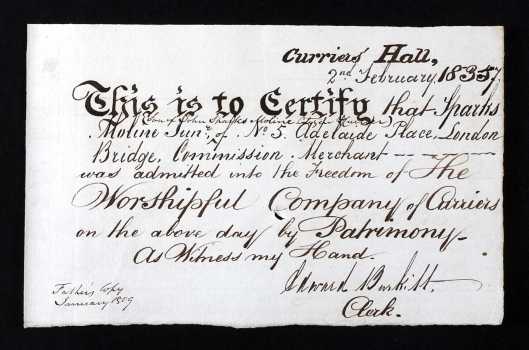 Next comes the end of the partnership with Waring and later that same year, on 8 November 1838, Sparks marries Isabella Prideaux at Kingsbridge, Devon. She unfortunately dies on 4 October 1840, just two weeks after their daughter Isabella Prideaux Moline is born. She is also buried at Winchmore Hill. The 1841 census lists Sparks in Llandygai, Caernarvonshire. Not sure what he was doing there, but with him is a Mary Moline, one year younger than Sparks, so she may very well have been his sister Mary Waring who was born in 1812.

In 1855, Sparks’ younger brother, David (1814-1864) had taken out a patent “for the manufacture of metallic window frames and skylights”.(3) In 1856, David obtained his freedom of the City (by redemption) and is then classed as “porter merchant” of 5 Adelaide Place, suggesting a partnership with Sparks. How is that for a career-change? When the partnership between the brothers was officially entered into is unclear, but it was dissolved on the 31st of December 1861.(4) Somewhere in the early 1840s, David had married an Austrian wife and they lived in “Laybach, in the empire of Austria” as his probate record would have it. David died there in 1864 of typhoid fever.(5) Laybach, by the way, is usually spelled Laibach and is better known as Ljubljana, these days the capital of Slovenia, but then part of the Austrian Empire. A train service between Ljubljana and Vienna had been established in 1849, so not too far an outpost to be living in.

Moline & Co. continued to act as the sole agent for Guinness, a privilege they frequently had to defend when others tried to encroach on their territory. In 1846, an injunction was taken out by Guinness and Purser against Hill and Coulson, to stop them “selling or otherwise disposing of any stout, porter, or other malt liquor in bottles with labels in imitation of the labels furnished to the plaintiff’s agents by Sparks Moline, or differing only colourably therefrom”.(6) And in 1853, it was Richard Sutton of Wood Street who fell foul of Moline’s monopoly. 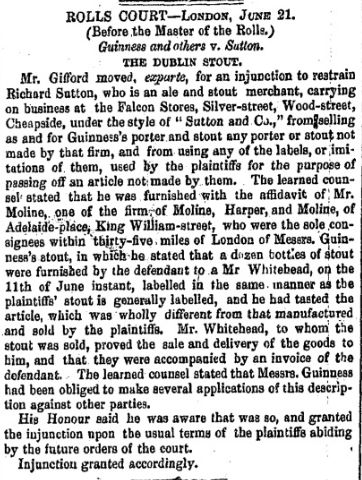 The agents and bottlers Guinness used were allowed to put their own trademark on the bottles and Moline’s was a monkey. The “monkey brand” was advertised as far away as New Zealand where Arthur H. Nathan advertised the beer bottled by Moline in The New Zealand Herald of 16 August 1889. At some point, Moline & Co. moved the business from Adelaide Place to Monument Buildings and from just acting as the London Guinness agent, the firm also became an exporter of their ‘own’ bottled Guinness. 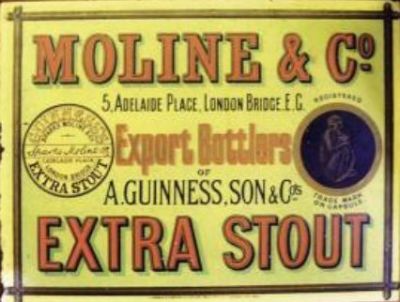 Sparks Moline died 28 November 1865 at Church Row, Stoke Newington, and, although he had been a Quaker all his life, he was privately baptised at St. Mary’s a few days before he died. He was nevertheless buried at Winchmore Hill. And he was not the only one who seems to have had a change of heart. His daughter Isabella Prideaux was baptised on 26 June 1861, also at St. Mary’s, and so were Sparks’ sisters, Lydia and Mary Waring, both on 16 January 1866. The unmarried sisters, their mother and their unmarried niece continued to live at Stoke Newington.(7) Despite sister Lydia’s baptism at St. Mary’s, she was buried in 1891 at Winchmore Hill, the Quaker burial site, so I am not sure what was going on, but perhaps it was another example of what the Friends mention on the Winchmore Hill website, that is that “The nineteenth century saw the defection of most of the more prominent business families, as the delicate balancing act between Quaker ethics and the demands of hard-nosed capitalism became increasingly difficult”. 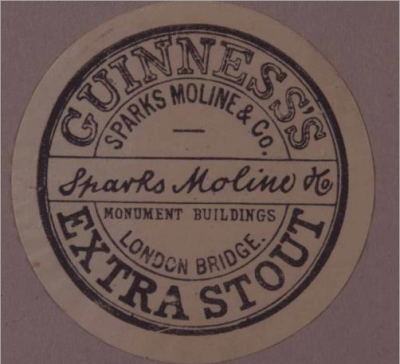 Postscript: Tabitha Driver of the excellent Friends’ library sent me the following information, for which many thanks:
You may notice that Quaker registers do include non-members (there’s a “N.M.” column in the 19th century Digester registers), and you will as in this case find non-members in Quaker burial grounds. Two common reasons for these non-member entries is in the case of disownment (as happened to bankrupts, for instance), or when children did not have “birthright” membership because only one of their parents were in membership – yet the individual or family maintained a close association with the meeting. In the case of close family ties one can see how easily the continuing association could lead to an entry in a burial register after a death in particular.

I’m glad to be able to quote the excellent guide, Milligan and Thomas, My ancestors were Quakers (Society of Genealogists, 1999):

Regulations adopted by yearly meeting 1774 provided that ‘when any person, not a member of the society, is permitted to be buried in friends burying-ground, it is to be noted in the margin of the register’. The book of discipline adopted in 1833 made more explicit provision for ‘one or more proper person’ to be appointed by the monthly meeting, without whose authority ‘no burial is to take place’: as far as the burial of non-members was concerned, discipline stated that ‘Friends are to exercise discretion in complying with any application’.

——–
(1) David Hughes, “A Bottle of Guinness Please”: The Colourful History of Guinness (2006). Hughes also mentions Sparks Moline at Billiter Street, but that may have been the grandfather of Sparks who was also called Sparks. The grandfather applied for the job of bridge master in 1824 and asked for the support of his fellow liverymen in an advertisement in The Times, sponsored by Samuel Gurney and William Fry, both Quakers.
(2) Patrick Lynch and John Vaizey, Guinness’s Brewery in the Irish Economy 1759-1876 (2011), p. 132-134.
(3) The Repertory of Patent Inventions (1855). For a description of the window frames, see here.
(4) The London Gazette, 24 January 1862.
(5) Illustrated London News, 15 October 1864.
(6) Rolls’ Court, The Times, 26 March 1846.
(7) More on the family and their Quaker ancestors can be found here.