Straw hats were quite a craze in Victorian England and Charles Vyse’s was one of the many shops where you could buy one. The straw suitable for making bonnets was mainly manufactured in Bedfordshire; the St. Albans, Dunstable and Luton areas are frequently named as sources of either the raw material or the finished product. The main disadvantage of growing the wheat for the straw in England was the climate. Although a single thunderstorm would not damage the wheat enough to prevent it from being milled into flour, damp could cause the straw to become rusted or spotted. Very dry weather would cause the straw to become very stiff or turn an undesirable reddish colour. If the conditions were favourable, however, and the farmer quickly got the dried straw tied into sheaves and stored or despatched to the straw pleaters, he could get from an acre of wheat “five to eight loads of wheat, of five bushels to the load, and from fifteen cwt. to a ton of cut straw, of the value of six to eight pounds stirling the ton, clear of all expenses”.(1) But straw bonnets were not just made in England; many were imported from Italy, specifically from the Leghorn area (Livorno, Tuscany) after which they were named Leghorn bonnets, or just Leghorns (examples here). 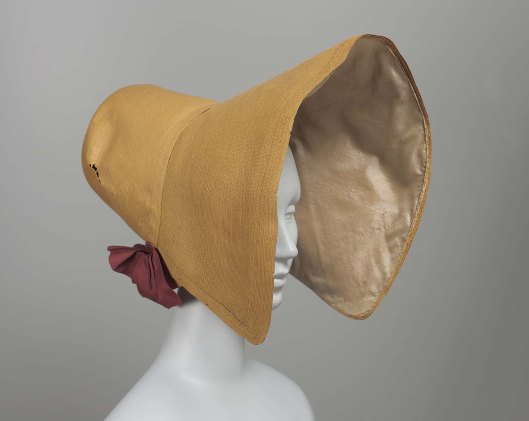 Charles Vyse can be found at 30, Ludgate Street from at least 1828 when an advertisement in the Morning Chronicle can be found for him, but he was already living in the street in 1823 when his daughter Emma was baptised, although no house number is given in the baptismal record. In a rather larger advert that appeared a year later (see illustration), Vyse lists all sorts of straw bonnets he had for sale and in it he also claims to have introduced British Leghorns in 1825, but I have found no other record of him to substantiate this claim. In 1829, his son Valentine is born who was eventually to take over the business.(2) In 1847, bankruptcy proceeding were taken out against Charles, but he was given a certificate(3) and continued to supply his straw bonnets from 30, Ludgate Street. In 1849, he advertised that he had just returned from Paris and could now supply an “entire new stock of Parisian and English millinery” and “trimmed bonnets” could be “sent into the country carriage free”. He could also supply mourning bonnets (fashionable ones of course) and milliners could obtain “first-rate pattern bonnets at really wholesale prices”.(4)

Advert in the Tallis Street View

Charles died in July 1850 at the age of 66 and left his entire business during her lifetime to his wife Mary and after her death to his children.(5) There was however, one condition: his son Edward(6) was not to be a partner, but was to receive a salary. Was Edward not trusted with the business? Not sure what happened to Edward, but at the time of the 1851 census, Mary is listed as the head of the household with son Augustus as manager.(7) The 1851 census does not help very much with the whereabouts of Valentine, Augustus’s younger brother, as he is seen visiting a family in Lambeth, so where he actually lived remains unclear. His occupation is given as bankers’ clerk. Valentine marries Anne Cornish Saunders, the daughter of a chemist, on 5 January 1851 at St. Peter le Poer. Both their addresses are given as Old Broad Street. It is quite possible that any combination or all of the brothers Edward, Valentine and Augustus ran the business together for their mother as an advertisement in the 1851 Official Descriptive and Illustrated Catalogue of the Great Exhibition mentiones the firm as “Messrs. Vyse”. The Land Tax records list Mary Vyse for the Ludgate property up till 1858, after which Valentine takes over. Edward and Augustus disappear from the records and Valentine seems to take over the business on his own. And then disaster struck.

Around 7 June 1862, a short notice appears in various newspapers, reporting that Mrs Vyse of Ludgate Hill had been committed to Newgate on a charge of wilfully murdering her children. Other papers suggest that she remained in her own house in the charge of a hospital nurse. What happened? The reports in the newspapers vary in detail and chronology, but I will draw upon Reynolds’s Newspaper of 13 July 1862, which seems to have carried the most comprehensive (and reliable?) account of Anne Vyse’s trial.

Valentine and Anne had at the time of the murder five children, but Ann had only brought her two daughters, Alice and Annie, up to town to show them the Exhibition. It later transpired that another child had also been in town, but he was at school during the afternoon. On the 22nd of May, Mrs Vyse went to Keating’s, a chemist in St. Paul’s Churchyard, where, after buying some perfume, she asked for something to kill rats. When suggested some poisoned wheat, she said she had tried that, but to no avail. She was then shown Battle’s Vermin Powder of which she bought three packets. She was cautioned by the chemist’s assistent that it was dangerous stuff. In the afternoon, she sent the servant to get another packet of the same. The servant, returning with the purchase, went to her mistress’s room, but was told not to come in. Her suspicions were aroused and she called Mrs Sarah Saunders, Mrs Vyse’s sister, who forced open the door. They found Anne Vyse standing over the washstand, bleeding from the throat, with a razor in her hand. The children were found dead in their beds, fully clothed. An analyses of their stomachs found large quantities of strychnine. The defence at the trial was that Mrs Vyse was pregnant “and that was a circumstance and a time calculated to produce great depression of the brain”. She had also lost a child to diphteria in 1860 which much affected her. Also, in the past, a cousin had intended to commit suicide and another had been confined in a lunatic asylum. More witnesses were called and all could mention a (distant) relative of Anne who committed suicide, was insane or at best, excentric. In other words, Anne Vyse’s actions could only be explained by insanity. The defence lawyer realised that an insanity verdict would mean confinement for life, but he could not argue any other way. The jury agreed and Anne was found not guilty on the grounds of “insanity at the time of committing the act”. The prisoner was to be “confined as a criminal lunatic during the royal pleasure”.

Put away at Broadmoor for life one would assume, but not so. The 1871 census shows Anne living with Valentine and a growing family at Wimbledon. Also at the address is Sarah Saunders, the sister who kicked in the door in 1862. One of the children, Sidney, is 8 years old, so he was probably the child Anne was pregnant with when she committed the crime. In 1868, another child was born to the couple, Sallie Louise, and I do hope that a permanent eye was kept on Anne for the children’s sake, although nothing untowards seems to have happened after 1862. Anne died in 1889 and was laid to rest in the same grave as the two little girls she killed. Valentine himself died in 1918.

You may also like to read the post on Charles’s brother Thomas Vyse, another straw bonnet manufacturer.