23 New Bond Street was used by several businessmen: Richard James Culverwell had his bathing establishment there, but Tallis also lists James Cooper, a tailor, Thomas Ince, a wine merchant, and G.H. Watton, tobacconist “Importer of Havannah Segars & Foreign Snuffs”. As you can see from the elevation at the top of this post, it was rather a large building which easily accommodated all these various businesses. Watton had apparently the most money as he had his name engraved above the building, but that is not to say that his shop was the largest; we do not know. The building was situated on the corner of New Bond Street and Conduit Street where today you can find the even larger building of Burberry’s.

Back cover of the autobiography

Culverwell wrote an autobiography, The Life of Doctor Culverwell, written by himself: being Curiosities of Thirty-Five Years’ Medical Experience, Embodied in the Biography of the Author (1850?), but unfortunately for us, Culverwell’s account is rather verbose, not to mention the fact that he refers to himself as ‘we’, because “it appears less gratingly egoistical”, so you never know whether he means ‘I’ or indeed ‘we’. All this does not make for easy reading. And the ‘facts’ about his life with which he interspersed the account of his medical cases may not be reliable, but I will draw upon them from time to time as they do fill in the gaps between the real facts elicited from dry archival records. Culverwell says that he was born on 13 July 1802 and that his father was a merchant. The date is born out by his baptismal record at St. Sepulchre, London, which gives the same date for his birth when young Richard James was baptised there on 8 August 1802 as the son of Richard James senior and Mary Ann Culverwell. Richard junior became an apprentice apothecary and he received his Licentiate degree in November 1824 at Apothecaries’ Hall after which he could legally start his own career. A year earlier, in November 1823, he had married Ann Eliza Mansell at St. Maylebone and after Richard’s exams, they proceeded to set up their own medical business. Richard typically does not give us the exact address, although later on he mentions living at number 3, but it was “on the borders of a bustling suburb of the north of London, in a newly-built residence” and his account of the preparations to open the shop are a good example of his style of writing.

The old custom for the draper, druggist, and other dealers, was to emblazon in shaded characters, black and white, gold and green, or any motley antagonism, as we see now in our palatial hotels, and other monster establishments. Accordingly, ciphered in due form over a broad front with a couple of transparent paintings in two central windows, one representing the hieroglyphic emblem of a rhinoceros, with “Chemicals from Apothecaries’ Hall” and another notifying the popular attractive fact that advice was to be had at certain hours for nothing, a card on our counter, and a conspicuous lamp, showing its refulgence a mile off, over our door, threw we open our “Medical Hall” to the admiring curious of the neighbourhood.

We may not know the address where he sat himself up in 1825, but we do know that he lived in St. John Square when his daughter Ann Eliza was baptised on 26 August 1824 at St. James, Camberwell. His profession is then given as surgeon. When his next child is baptised, Georgina Phillis, on 4 June 1826, the family’s address is Lower Road (now Lower Street), Islington. They were still there when the third daughter, Harriet Muriel, was baptised on 29 October 1828. We know from later records that there was at least one more daughter born to the couple, Fanny, but I have not found any baptismal record for her. Judging by the census records, she was born c. 1834. That brings me to the first census record available, that is of 1841, when the family are residing at Grove Place.

By then of course, the baths were well established in New Bond Street as Tallis’s Street View testifies, but before that the Culverwell baths were to be found at Founders Court, Lothbury. An advertisement in The Examiner of 14 March 1830 announces “Culverwell’s shampooing, sulphur, Harrowgate, medicated, vapour and warm baths”. A warm bath would cost you 2s. 6d. According to Richard’s autobiography, the idea of providing hot baths emerged when he still lived and worked in the suburbs (presumably at the Islington address) when a rich patient used a large copper cauldron at the surgery for the hot baths he had been advised by a physician, rather than going up to London to have a good soak. Word got out and hot baths turned out to be more profitable than bottles of physic. The Culverwells had a wooden bath lined with lead constructed in a separate room, but it caused severe disruption to family life as a waiting room had to be arranged in the parlour. One day, the demand for hot water was so great that the chimney caught fire. The coach house at the back of the house was subsequently converted into several bath rooms where vapor, sulphur and warm baths could be had. The drawback was that customers had to go through the house and garden to get to the baths and in winter everything got mouldy and damp. With a neighbour(1), Richard then planned to open a bathing establishment in London and as the neighbour went there every day for his work, he was to find suitable premises, which he eventually did in Founders Court. Culverwell claims to have had twelve rooms with baths in each of them, and in some of the larger rooms, they had vapour, hot air and sulpher baths. The prices were adapted to London standards and a hot bath was now 3s. 6d., later reduced to 2s.

Culverwell branched out into writing books about medical subjects, not so much because money was to be made from the books themselves, but because they could be used to draw in the customers. Some of his publications have several pages at the back eulogising about the baths and itemising his growing list of publicatons. And it worked; business was going well and thoughts of expansion entered Culverwell’s mind. One day, “in a West End ramble our eye caught some premises to let, at 23 New Bond street”. And so Culverwell moved his family to Bond Street and attended to his customers at Founders Court in the morning and to Bond Street in the afternoon, but “the West End Establishment was not successful or satisfactory as a locality for practice. After enduring many discomforts, we sold it for less than half of the original outlay”. And so the baths moved again, this time to 5 Broad Street. Culverwell does not provide years for the several moves, but from advertisements and other sources, we can deduce that the move from New Bond Street came about fairly soon after the Tallis Street Views were published, as an advertisement in his Medical Counsellings; or, The Green Book of 1841 already gives the Broad Street address. An advertisement in his Illustrated Domestic Handbook for Invalids of 1843 tells us that he had moved his family and doctor’s practice to 21 Arundell Street, Strand, while maintaining the baths at Broad Street. Richard had by then acquired his medical degree on the Continent which, according to him, was a lot cheaper than trying to obtain the degree from the College of Physicians. 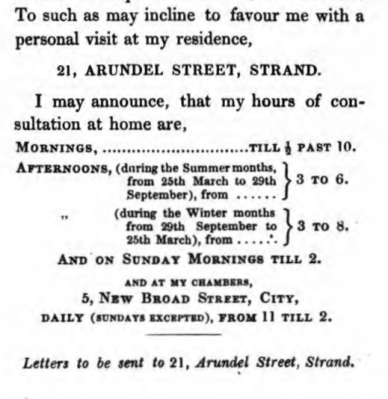 And then came the last move and finally Culverwell gives us a date “On the 8th of August, 1846, we removed to Argyll Place”. And there they stayed. In December 1852, Richard died, but the business was continued by the widow. The 1861 census shows her as the “owner of public baths”, living with daughter Fanny at 10 Argyll Place. Ann Eliza died in December 1863, but the baths remained in Argyll Place for many years to come.

(1) The neighbour is just referred to as Tom in the autobiography, but two notices in the London Gazette (2 November 1830 and 8 May 1838) tell us that his name was Thomas Cooke.