In 1826, Christopher Gullett Millman (also Milman), the son of William Millman, coal merchant at Plymouth, was taken on as an apprentice by Thomas Broomhall of Swan Lane, Upper Thames Street, indigo and drug broker. Broomhall died in July 1828 and his executors agreed to turn Millman over to Thomas Etherington of Cannon Street, dry-salter, for the rest of his term. Daniel Defoe described a dry-salter as a trader in “salt-peter, indico, shumach, gauls, logwood, fustick, brasileto &c”(1). Both Broomhall and Etherington were members of the Company of Dyers and in 1838, Millman received the freedom of that Company.

Source of the three illustrations of the catalogue: IISG, Amsterdam, shelfmark 474:4.3.1.17

Millman became a partner in the firm of Andrew Johnson and David Henry Renny, brokers at 57 Fenchurch Street since at least 1834. We would not have known much more of Johnson, Renny & Millman if one of their sale catalogues had not been kept in a Dutch archive (the Internationaal Instituut voor Sociale Geschiedenis / International Institute of Social History, Amsterdam, shelfmark 474: 4.3.1.17). This 10-page catalogue announces the sale of products that the firm had for sale on 27 February, 1840, at the sale room in Mincing Lane. The copy of the catalogue in the archive is annotated in different hands, but the one who made the notes on the right-hand side of the paper in ink was certainly a Dutchman. I cannot decipher everything he has written, but certain words are legible, such as oranje [orange], hobbelig [bumby], gruis [grit], helder [clear], donker bruin [dark brown], and fijn stof [fine dust] and are definitely Dutch.

Although Tallis describes the three men as being indigo merchants, they did not sell indigo in this sale, but linseed, saffron flowers, shellac, seedlac, hemp and gum arabic. Indigo is derived from the plant Indigofera tinctoria which basically produces the same dye as the woad plant (Isatis tinctoria), but more and richer hues could be produced with indigo, so it was well worth the trouble of importing from afar.(2) Nowadays, indigo is usually imported from El Salvador, but in the 19th century, most came from India. Seedlac and shellac are not derived from a plant, but is a natural resin secreted from the female lac beetle (Kerria lacca) during the mating season. The secretion is gathered from the branches on which the beetle deposits it. It is then ground and sifted to remove most of the dirt and other impurities. The seedlac thus obtained can be further refined to produce shellac.(3) 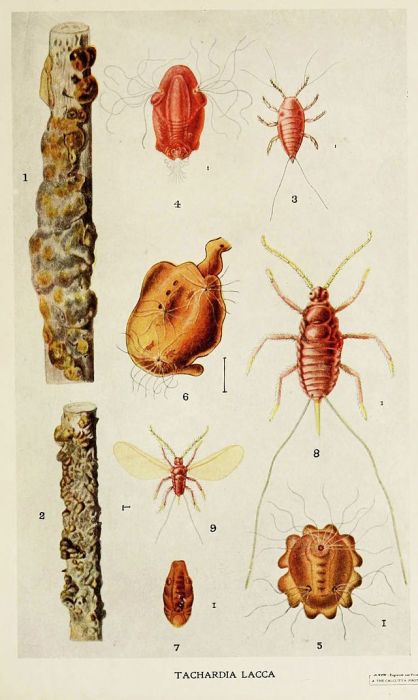 Don Williams, The Story of Shellac, 1913

Millman’s partnership with Johnson and Renny did not last very long; on 2 April 1841 it was announced in the London Gazette that Millman was to retire and Johnson and Renny were to continue the business. In 1850, the two remaining partners, by then trading from 11 Great Tower Street, split up.(4) Johnson remained in Great Tower Street and we still find him there in 1864, when “Andrew Johnson and Co, brokers” announce the sale of 217 bags of cochineal.(5) In that same newspaper we find an advertisement for “Renny, Anderson and Co, brokers” of 37 Mincing Lane offering 60 bags of cochineal and 30 bales of safflower. That this Renny is the same Renny as the one in partnership with Johnson and Millman can be seen from the notice about his retirement from this later partnership in 1877. The notice in the London Gazette of 13 March 1877 explicitly states that it is David Henry Renny who retires. He dies in 1880 at 1 Argyll Road, Kensington and was buried at Norwood Cemetery. His probate entry(6) mentions two executors, one of whom is Thomas Hardwick Cowie, Renny’s nephew. The Cowie family, although not Thomas himself, had been visiting the Renny family at the time of the 1851 census when Renny lived at Crown Hill, Lambeth.

It would have been nice if more information had been found on the third partner Johnson, but alas, I have not managed to work out which of the many Edward Johnson’s fits the bill.

There is, however, a bit more information to be found about later occupants of 57, Fenchurch Street, which was, at least since 1847, and maybe even earlier, in the possession of John Poole, watch and chronometer maker. He is mentioned in Kelly’s Directory of the Watch and Clock Trade of 1847 and won prize medals at the 1855 Paris, 1862 London and 1867 Paris International Exhibitions. He invented the ‘Auxiliary Compensation’ to correct for errors in chronometers at low temperatures. He committed suicide in 1867 and the business was taken over by his brother James who continued to produce chronometers engraved with his brother’s name.(7)