This story starts when George Hebert, a weaver, and Ann Peltrau get married in St. Leonard Shoreditch Church on 16 April 1772. They were both of French Huguenot descend and their children were baptised in the French Protestant Church in Artillery Street. Two of the children, George David and Guillaume (later more often called William) were to set up a bookshop and circulating library.(1) On 1 April, 1794, William Lane, Citizen and Stationer of London takes on apprentice George (David) Hebert at a premium of £100. This premium was paid by David Descarrieres who, according to the indenture, was George’s guardian. George acquires his freedom after the regular 7 years. His brother William was apprenticed in 1799 to Richard Lekeux, Citizen and Fishmonger, which does not sound likely in view of William’s later career, but although Lekeux (or Le Keux) happened to be a member of the Fishmongers’ Company, his profession was mathematical instrument maker. Still not quite the same as bookseller, but at least not as far removed as fishmonger and the brothers were to specialise in mechanical and scientific books. Lekeux received a premium of £63, but the indenture does not state who paid it. William was made free in May 1806.(2)

Whether the brothers set up shop immediately after the end of their apprenticeship or whether they first worked for someone else is unclear. The earliest mention I found of the brothers’ bookshop and library is in the 1814 Post Office Directory where the address is given as 36 Poultry. The joint enterprise did not last very long, as in February 1815, a notice in the London Gazette announces the end of the partnership; George is to continue the “Circulating Library and the Bookselling and Stationary Business” at 36 Poultry. Where William next went is unclear, but when his son William Theodosius was apprenticed in 1838 to a chaser, William was described as a bookseller of Liverpool.(3)

In November 1811, George had married Elizabeth Woodburne at St. Mildred Poultry and the couple were to have (at least) three children: Elizabeth, baptised 16 August 1814, and two boys who were to follow their father in the book trade: George junior, born 22 April 1817, baptised at St. Mildred’s 24 January 1819 and Roger Woodburne, born 25 December 1818 and baptised on the same day as his brother. The address of the parents is given as Cheapside, so George senior must have moved the shop somewhere between 23 November 1816 when he advertises in The Morning Post with the 36 Poultry address and early 1819. The baptism record does not give a house number, but an advertisement in The Morning Chronicle of 11 March does; the shop could be found at number 88. We know almost nothing about the circulating library, apart from the mention of its existence in directories and advertisements, but by chance, one book (Owen Felltham’s Resolves, Divine, Moral and Political, 1806) with the label of the library was offered for sale recently and the seller very kindly sent me a photograph to illustrate this post. 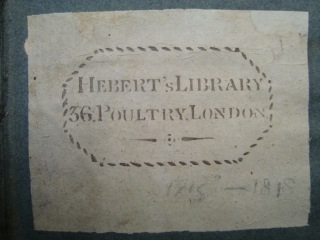 Library label (with grateful thanks to Peter Spain of http://www.westgrovebindery.com)

George junior is apprenticed to his father in 1832 and made free in 1839. The indenture gives no indication of what happened after the death of George senior in 1837.(4) Normally, on the death of his master, an apprentice is turned over to another master to serve out his time and that is usually recorded on the papers, but not here, so presumably the Company did not see the continuation of the business by the widow as a change. Roger acquires the freedom of the City through the Stationers’ Company by patrimony in December 1840. In his will, George senior had named his wife Elizabeth as the sole executrix and he leaves her “all my estate and effects … absolutely for ever feeling perfectly satisfied … that my dear and good wife will do the best for our most dear sons”.(5) From the 1841 Post Office Directory we can see that Elizabeth continued to lead the bookshop and library and even the 1851 census still lists her as Circulating Library Keeper with the two unmarried sons still living at the same address. However, the family no longer lives above the shop in Cheapside, but at 17 Queens Place, Lambeth. Advertisements in the 1840s suggest that while Elizabeth ran the library, George took care of the bookselling and publishing side of the business with Roger joining him later.

George junior married Mary Ann Nesbit in 1854, but the marriage did not last very long as in the 1861 census he is listed as a widower. I have not discovered when he died, but since I have not found any advertisements for the bookshop after 1861, I assume he died or retired soon after. Roger marries Elizabeth Redman in 1864 and, according to the censuses, the couple seems to have had one daughter, Elizabeth. Roger dies 5 May 1894, but is by then long retired (at least since 1871, but possibly as early as 1861) and living in Somerset. 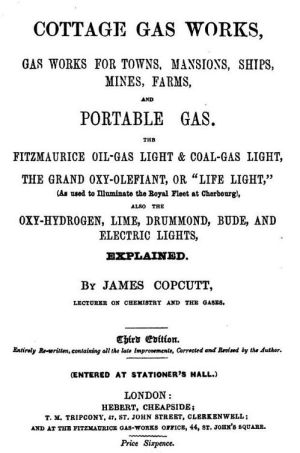 1860 one of the last Hebert publications