Another member of the Cazaly family to get a blog post. This time William, or Guillaume as he was baptised in 1796, a linen draper in Red Lion Street. Like his brother Thomas he was baptised in the French Church L’Eglise de St. Jean, St. John Street, Spitalfields, but he did not keep to the family’s French heritage and married his wife, Susanna Brees in the church of St. George the Martyr. The census records for 1841-1861 show their children as Sarah (born 1836), Susan (1839), Marianne (1840), William (1841), Charles (1843), Emily (1847), Walter (1852), and George Ernest (1855). Libby Shade lists more children, but those are not mentioned in the census; they may have died young. William is referred to as ‘clerk to his father’ in the 1861 census.

Linen draper from The Book of English Trades (1818)

According to The Book of English Trades, “The Linen-Draper sells cloths which are made of flax and hemp; as Irish linens, Russia towelling, Cambrics, &c. and, also, shawls, printed calicoes, muslin, &c&c.” And London is noted for getting the most elegant articles in printed calico and muslin, hence ‘London prints’. Some of the London retailers employ twenty or thirty people – not that William Cazaly is likely to have traded on that scale – but, warns the author, it is a business in which “more people have failed than in any other in the united kingdom, owing to its being liable to partake of the fluctuations, unfortunately almost inherent in the manufacturing system, and to the great versatility in fashion and dress”.

In 1816, 48 Red Lion Street was occupied by one G. Spence, an upholsterer. In 1820 and 1821, Brooks Hinton, another linen draper, insured the premises. When he left and when William moved in is unclear, but William probably had the shop before his marriage in 1833. The earliest evidence I found is a notice in the London Gazette of 22 January 1833 in which the dissolving of the partnership between William Cazaly and Robert Hood is announced, and that certainly sounds as if the business existed before 1833. In 1839, William takes out an insurance for the premises with the Sun Fire Office. In 1858, the property at 48 Red Lion Street is offered as a “freehold business premises … let on lease at 80l. per annum. Sold for 1000l.”(1) Whatever the reason for this advertisement, Cazaly’s shop remained where it was, although he no longer lived above the shop. The 1861 census sees the family in Sheffield Gardens in Kensington, a new estate built on the grounds of Sheffield House (see for the history of the development here).

But things were not as rosy as they seemed. In 1864, the shop was burgled.(2) and in early 1869, the Court of Bankruptcy files trust deeds by William as debtor for the benefit of his creditors.(3) In it, one Peter Cazaly is mentioned as draper’s assistant, but how he is related exactly to the other Cazalys is not clear; Peter was a common name in the family. It may have been William’s brother, born 1794, who seems to have been living at 48 Red Lion Street at the time of the 1841 census, but perhaps it was one of the nephews. A few months after the bankruptcy notice, on 7 May 1869, William died at 14 Beacon-hill, Camden Road, and probate was granted to the widow. The effects were valued at under £100.(4) 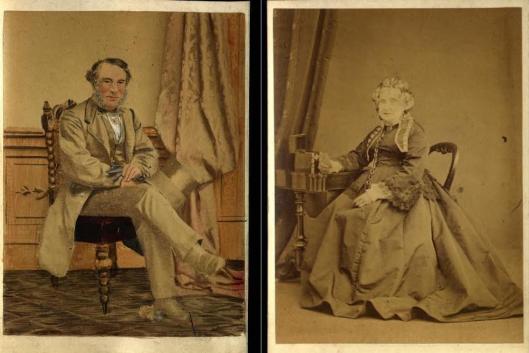 portraits of William and Susanna, kindly provided by Andrew Cazaly, a descendant, for which my grateful thanks (see also the comments to this post)

You may also like to read about William’s brother, Thomas Cazaly, who was an engraver and stationer at 48 Tottenham Court Road, or about Postman’s Park hero Herbert Peter Cazaly, the grandson of William’s brother James George. The post for Thomas Cazaly includes a simple family tree, but a far more elaborate one can be found here on Libby Shade’s page (click on ‘Cazaly family’ and then on ‘Cazaly.pdf’ to see the whole tree).