In 1929, a Canadian newspaper(1) ran an extensive article on “The Oldest London Bookshop” to mark the bicentenary of the shop. The article describes the subsequent owners of the bookshop, quoting heavily from The Oldest London Bookshop. A History of Two Hundred Years by George Smith and Frank Benger (1928), the commemorative volume published at the time of the celebrations. The book was published by Ellis, 29 New Bond Street. In actual fact, the last Ellis had died in 1902, but the new owners kept the old name. 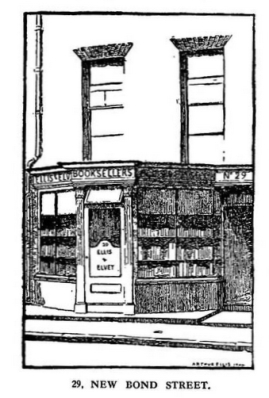 However, for the purpose of this blog, we are concerned with the Boone family who occupied the premises at the time of the Tallis Street View. Thomas and William were brothers and first had a shop at Russell Court, Covent Garden and later at 480, Strand. Thomas had married Emma Little in 1819, but William was to remain a bachelor. According to The Oldest London Bookshop Thomas and Emma had two children, Emma Elizabeth (baptised 27 Aug. 1820) and Thomas (baptised 10 Nov. 1821) who later entered into the business, but they also had two other sons not mentioned in the book: James Henry (baptised 17 March 1825) and Oliver (baptised 27 Jan. 1830). James Henry unfortunately died in 1842, but Oliver became a clerk at Drummond’s bank, 49 Charing Cross. Aged just 13, he was recommended as a clerk by his godfather, Thomas Oliver, but was not taken on by the bank until the 1st of July 1848. He worked in the banking house at Charing Cross for 27 years, first as a clerk and from 1853 as a cashier. As a clerk, he not only worked, but also lived at the banking house with other unmarried clerks. Where he went after he moved out of the bank and when exactly he married is not known, but in the 1861 census, we see him living with his wife Clara in Kingston, Surrey. His occupation is still given as banker’s clerk. Clara dies in November 1868. I have not found Oliver in the subsequent census of 1871, but we know that he resigned from the bank on the 24th of June 1875 shortly before his death on 21 September that same year and on his probate record he is recorded as “late of 49 Charing Cross and 6 Clarence villas, Richmond”, which would indicate at least a pied-à-terre at the bank’s.(2) 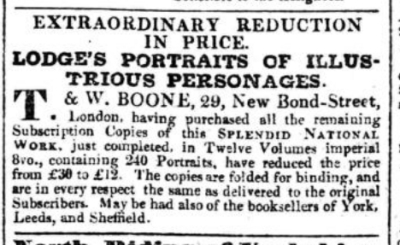 In the 1841 census, we see Thomas (52 years old), William (46), Emma (42) and Thomas junior (19) living in New Bond Street. In 1851, Emma Elizabeth is also found at that address, still unmarried, but in the 1861 census she is described as “clergyman’s wife”. Her name is still given as Boone, but she had married George William Temple earlier that year. Not much is known about Temple, but another clergyman in the family made more of an historical impression. Frederick Nolan, an Irishman, who, in 1822, became the vicar of Prittlewell, Essex (with the curacy of Southend attached) had married Angelina Boone, sister to Thomas and William. Nolan was decidedly eccentric and set up a private press where he mainly printed his own works.(3)

Nolan clashed with his parishioners concerning the hour of bell-ringing. The story is related in Southend-on-Sea and district: Historical Notes and I quote

Originally he allowed it to commence at 5 a.m., and then wished to change the hour to 8 a.m. This was resisted, and feeling became so intense that on Sunday morning, June I4th, between nine and ten o’clock, whilst the bells were being rung, the Vicar entered the belfry and tried to cut the ropes with a carving knife. Summonses and cross-summonses were issued. The Vicar employed police to prevent entry into the church. The parishioners retaliated by breaking his windows, and the Doctor armed his wife and himself with pistols for their protection. Notwithstanding every hindrance, the men obtained access to the belfry by mounting the roof and passing through a door there. Shots were fired from the vicarage, followed by groaning and shouting. A scene of much confusion ensued. Five of the ringers were summoned to appear before an ecclesiastical court at the instance of Dr. Nolan, and the parishioners retorted by burning his effigy at Prittlewell. The men failed to put in an appearance and heavy fees became due. One of them was arrested upon warrant and imprisoned at Moulsham (Chelmsford) for thirteen weeks, until the costs had been paid by subscription. He and the others were bound by oath not to further molest the Vicar.(4)

The Boones published a number of Frederick’s works, such as The Time of the Millennium Investigated (1831) and Supplement to An inquiry into the integrity of the Greek Vulgate (1830) and no doubt sold other works by him but not published by them, but the range of books available in the shop was far more extensive than just the tract written by an Essex vicar. They advertised, for instance, with the twelve volumes of Lodge’s Portraits of Illustrious Personages(5) and with the second edition of the History of the Waterloo Campaign by Captain Siborne(6). In 1859, an advertisement in Notes and Queries filled more than half a page and listed the various subjects that could be bought in their shop:
– Illuminated missals, psalters, horae, and other manuscripts
– Books printed upon vellum and specimens of early typography
– Early English and foreign poetry, romances, facetiae, &c
– Books of prints and illustrated books
– Topography, heraldry, genealogy, history, and antiquities
– Rare voyages and travels, works on natural history, &c.
The sale of old and rare books became something of a speciality of the Boones and William’s knowledge in particular was highly thought of by the collectors at that time. He was even appointed buyer for the British Museum and supplied them with several very valuable manuscripts, among them the ‘Bedford Hours’.(7)

William died on 26 November, 1869 and was buried a week later at Brompton Cemetery. His probate record gives his wealth at “under £30,000” and was proved by Angelina Nolan, his sister, by then a widow.(8) Thomas senior and junior decided to sell the business in 1872 and the remaining stock was sold in 1873. Thomas senior died that same year. He was buried 28 April 1873 in the same grave as James Henry where later his wife Emma (13 Sept. 1875), his son Oliver (27 Sept. 1875) and his daughter Emma Elizabeth (15 Dec. 1904) were to follow him.(9) While William’s fortune had amounted to £30,000, Thomas’s probate record lists his effects “under £60,000”. (10) The graves of William and Thomas are situated next to each other in Brompton cemetery, but the headstones are no longer legible. A friend has taken a photo of the general area and that will have to do as a memorial to the Boones.

We will end this post with a quote from the commemorative book, allegedly from ”a well-known London librarian”; the name of Ellis might just as well have been that of Boone.

Ellis has a noted name in Bond’s highway;
Shut his shop, the earth would stop in sheer dismay.

(1) The Montreal Gazette, 7 Jan. 1929, online here
(2) Drummond Bank was acquired by The Royal Bank of Scotland Group in 1924 and they hold the archives for Drummond’s. Many thanks are due to Sophie Volker, archivist trainee at RBS, who filled out the information on Oliver’s career.
(3) H.R. Plomer, “Some Private Presses Of The Nineteenth Century” in The Library (1889), p. 417.
(4) J.W. Burrows, Southend-on-Sea and District: Historical Notes, (1909) pp. 191-193 which also includes some of the songs that were made to ridicule Nolan.
(5) The York Herald, 20 Feb. 1836.
(6) The Morning Chronicle, 12 March, 1845.
(7) The Oldest London Bookshop, p. 61-63.
(8) England & Wales, National Probate Calendar (Index of Wills and Administrations), 1870.
(9) Grave and burial detail from www.deceasedonline.com. Thanks also to the kind people at Brompton Cemetery who checked their records in the hope of locating the graves.
(10) England & Wales, National Probate Calendar (Index of Wills and Administrations), 1873.