Lowther Arcade once ran from the Strand to Adelaide Street. The Strand-side entrance was situated in Lowther House. The lease was to be taken over by Coutts Bank who left the frontage in the original style until 1978 when the present building, designed by Frederick Gibberd & Partners, was opened. Because the building to the left and right are still as John Nash designed them in the 1830s and because Coutts’ glass frontage is completely different from the surrounding premises, it is easy to see where Lowther House once stood. See for a history of Coutts Bank here. 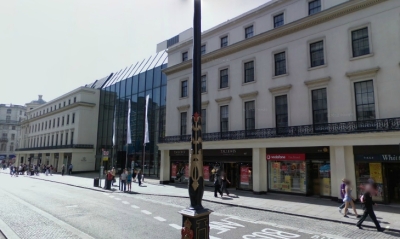 According to Tallis in booklet 13 (Strand Div. 5) Lowther Arcade was “a beautiful passage lighted by a glass roof, and consists of elegant shops. It conducts from the Strand to St. Martin’s Church, and the New National Gallery”. In booklet 81 (Lowther Arcade) he says that it

is short, but for beauty will vie with any similar building in the kingdom; its architecture is chaste and pleasing; its shops well supplied, tastefully decorated, and brilliantly illuminated at night. It forms a pleasant lounge either in the sultry heat of summer or the biting cold of winter. At the western end of this building is situated the Gallery of Practical Science, an exhibition we should particularly recommend to the patronage of the public.

This Gallery of Science was situated at numbers 13 and 14, opposite the shop at number 11 of Edward Marmaduke Clarke, philosophical instrument maker. Clarke was an Irishman who had started out as an optician, first in Dublin, but by the 1830s, he had moved to London where he started working for Watkins and Hill of Charing Cross. While there, Clarke was set to demonstrate electro-magnetic machines and to find a way of producing locomotion by electricity. Not long after, he set up on his own at 39 Charles Street, later moving to Agar Street. In 1835, he brought out a ‘magnetic electrical machine’ for which he was accused of plagiarism by Joseph Saxton, an American instrument maker employed at the Gallery of Practical Science, also known as the Adelaide Gallery. Saxton himself had been into trouble over allegedly plagiarising Hyppolyte Pixii’s machine in 1832, but to this day the jury is still out on that issue and it depends very much on the question: at what point can modifications and improvements be classed as a new invention?(1) In 1837, Clarke, inspired by William Sturgeon in whose Annals of Electricity he had described his machine, founded the Electrical Society of London. The Society first met in Clarke’s shop at number 11, but soon moved to the Gallery across the Arcade.(2)

Clarke’s machine in Annals of Electricity (1837)

At the time of the 1841 census Clarke could be found at 428 Strand. A trade card in the British Museum shows that he is still working as an optician, but that he is also styling himself as ‘magnetician’, according to the Oxford English Dictionary “an expert or student of magnetism”. Clarke even warranted the earliest reference to the word in the dictionary with a quote from volume 2 of Annals of Electricity (1838): “Had Mr. Clarke, the ‘magnetician’, known that fact, he might have saved himself the trouble.” Sometime in the 1840s, that is before Tallis’s Supplement came out, Clarke branched out into engineering when he became the proprietor of the Rodney Iron Works in Battersea where engines, tools, boats and locomotives were made. Also in the 1840s, he produced a price list of all the instruments he could supply. The symbolic illustration on the title-page showed his electro-magnetic machine in the centre. 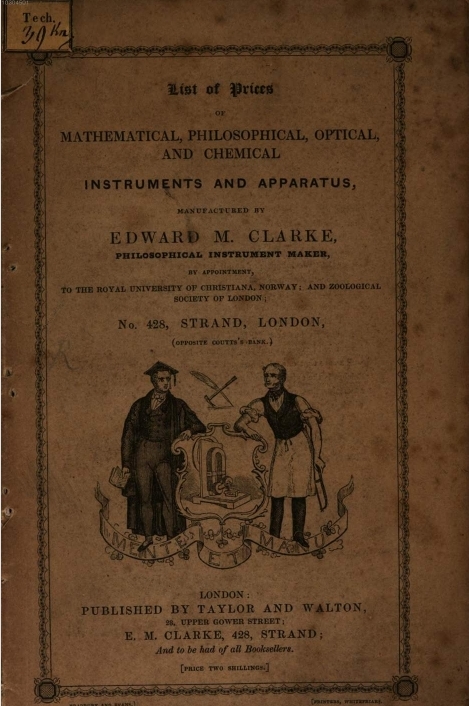 On the reverse of the title-page, Clarke tells his prospective customers that “in addition to a theoretic knowledge of the principles of their formation and application, he possesses the mechanical capability of constructing them with his own hands, and really makes what he sells”. Customers were also invited to come and have a look in his workshop if they are so inclined. The list has been divided into the various subjects of study, such as mechanics, dynamics, hydrostatics, steam, photography, chemistry, etc. And not forgetting his original occupation of optician by offering glasses, telescopes and microscopes. The whole list can be viewed online here.

In 1855, Clarke showed himself in favour of “the Saturday half-holiday” when a letter by him was read at a meeting to discuss the pros and cons of leaving off work at 2 o’clock on a Saturday. The newspaper article reporting on the meeting stated that “Mr. Clarke, of the Rodney Iron Works, Battersea [bore] testimony to the satisfactory results, so far as his experience went, of early closing on the morals of the work people and the interests of the employers”.(3) The idea behind the motion for early closure was prompted by a wish to keep the whole of Sunday available for religious activities if people so wished, which was impossible if that day was the only day on which they had time to buy their groceries. Whether Clarke really thought that people should be able to spend more time in church is not known, but on that occasion the motion was carried and one may assume that the employees at the Iron Works benefited.

Despite branching out into engineering, Clarke had not given up on spreading the word of his new inventions altogether. He sold his business in the Strand to Messrs Horne, Thornthwaite and Wood and started on a very ambitious project to build a purpose-built exhibition centre and in 1854, the Royal Panopticon of Science & Art was opened in Leicester Square. The building was a grand affair in the Moorish style with lecture and exhibition halls. After the opening by the Bishop of London on the 18th of March, 1,000 visitors per day could be welcomed, but the interest waned quite quickly and within two years Clarke, who had been the resident proprietor of the Panopticon, resigned. A short time later, the building had to be sold for a fraction of what it had cost and it became the successful Alhambra Palace / Theatre.(4) There is some confusion over the last address for Clarke. According to the ODNB, Clarke died of apoplexy at 4 Birchin Lane on 26 January 1859.(5) He was buried on the 31st in Kensal Green All Souls cemetery. His address in the burial record is given as Avoca Villa, Kirk Dale, Sydenham, Kent and B. Gee gives his last address as 4 Grove Park Terrace, Camberwell. 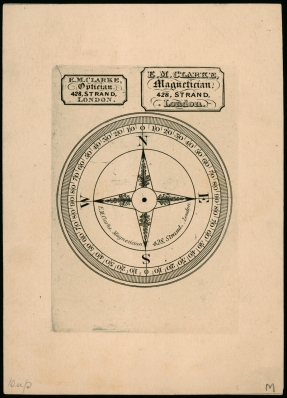