The elevation from Street View 67 above shows the White Hart Tavern & Family Hotel. The proprietor, William Morris, took over from his predecessor, one William Melton somewhere between 1825 and 1829. Melton is still mentioned in Pigot’s Directory for 1825, but in 1829, the insurance at the Sun Fire Office names Morris as the proprietor. In 1819, the “tavern and coffee-house … together with the poulterer’s shop and liquor shop and tap” as well as “extensive premises at the back” and several houses in the neighbourhood were to be sold by auction by Mr. Burrell of 5, Throgmorton Steet at Garraway’s.(1) Whether that was the moment Melton acquired the property is unclear, nor is it clear whether he, and later Morris, acquired all the houses mentioned in the auction advertisement, or whether they were sold separately. As the auction announcement tells us, the business was listed as a tavern and coffeehouse, but the advertisement in the Street View booklet informs us that Morris had expanded the business into a hotel and that he imported and traded “foreign wines, and spirituous liquors, &c.” He had rooms available for gentlemen and families from the country, not forgetting good beds and every other accommodation available, whatever that entailed.

The inn was originally part of the buildings of the hospital of St. Mary of Bethlem, founded as a priory by Simon Fitz Mary in 1246. Fitz Mary owned considerable property in Bishopsgate which he gave to Godfrey, chaplain to Pope Innocent IV and bishop-elect of Bethlehem, who had come to England to appeal for funds to found a monastery. The charter of the order of “S. Mariae de Bethleem”, dated 1247, still exists. The brothers probably first lodged in Fitz Mary’s house while the priory was being built. In 1375, Edward III seized the monastic buildings on the pretext that it was an “alien priory” and the site lost its monastic character and became a hospital for ‘distracted’ people, hence Bedlam Hospital.(2) Fitz William’s house was turned into “a faire inne for receipt of travellours” who found the City’s Bishop’s gate closed after dark(3) It is unclear whether the priors themselves already ran the travellers’ inn, or that the building had been turned over to commercial proprietors. Until 1829, the building showed the year 1480 on its front, but it was certainly in use as an inn before that. Perhaps 1480 was the date a new building was erected on the site to replace the medieval house.

White Hart pub sign, although not from the Bishopgate inn @Victoria and Albert Museum

The story goes that the name The White Hart for the inn originated in the time of Richard II who used the symbol as his favourite badge and had his servant dressed in livery with an embroidered hart with a gold chain or collar. Hart, by the way, is not a spelling mistake for heart, but derives from Old English heorot, stag or deer.(4) In Dutch the word ‘hert’ is still used for a deer. 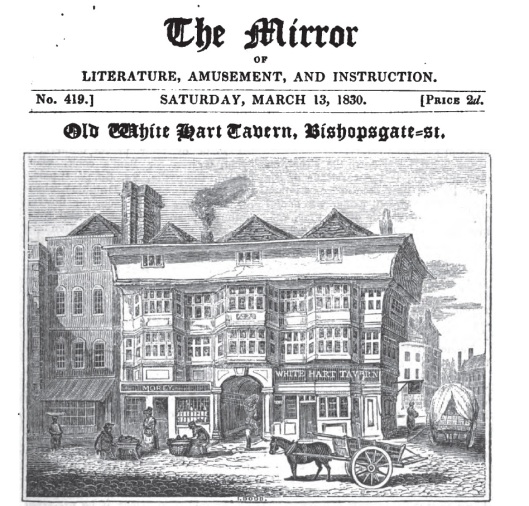 The Mirror of 13 March, 1830 tells us that “during the past year (1829) the old building has been taken down, and on its site the inn has been rebuilt in a style of architectural elegance quite equal to the importance attached to taverns in our times: the new building forming the angle of Liverpool Street.” They do, however, show the old inn above their article. The building process of 1829 had not been quite as smooth as one might perhaps assume from the newspaper report. The Law Journal of 1832 reported on the case in the Court of Chancery of Lett versus Morris.(5) It transpired that on the 4th of June, 1828, James Greenway, a builder, had agreed with Morris to pull down and rebuild the White Hart for 2,360l., the old material to be taken away for 160l. The money was to be paid in instalments according to the progress of the building work. Greenway ordered timber to the value of 700l. from timber merchant James Lett, but Lett would not supply it on the credit of Greenway (why not one wonders; was Greenway not very good in paying his suppliers?). Lett demanded a guarantee from Morris which he refused. To get round this stalemate, an order was drawn up in which Greenway authorised Morris to pay parts of the instalment money due to him to Lett.

Incidentally, this order also gives us Morris’s address at the time when his inn was being rebuilt. He was temporarily living at 74, Houndsditch. This money order satisfied Lett and he delivered the required timber. In September, he received his first instalment and later, the second instalment. However, Morris refused to pay the third instalment of 80l, or the remaining 460l. According to Morris, he had not paid Lett the first two instalments, but had handed them to Greenway, which was technically correct of course. He had paid those instalments because his surveyor had let him know that the building work was going as planned. But he claimed that after that time, “the contract had not been duly performed by Greenway in time” and that therefore the later instalments were not due. Unfortunately, poor Lett died before the case could be decided in court and his case was taken over by his executors. They argued that the order amounted to an equitable assignment, which the lawyers for Morris obviously denied. According to them an order, an authority to pay, is not the same as on obligation to pay. To cut a long legal story short, the court decided for the plaintiff and Morris was ordered to pay the balance of the account with costs. Unfortunately, the story does not tell us in which way Greenway was at fault, other than being a bit slower than agreed upon, but judging by the article in The Mirror, the building was long finished before the case came to Chancery and Lett seems to have been hard done by.

After the death of William Morris (buried St. Botolph B’gate 30 April 1842), his widow Grace took over, later assisted by her son Marcus William and daughter Helen. Grace and Marcus were born in Mevagissy, Cornwall, but Helen in Middlesex. Whether William was also born in Cornwall is uncertain. In the 1851 census, the White Hart spirit vaults are listed separately as occupied by James Clubb, the manager, and his family. A similar division is probably visible in the illustration in The Mirror where the left-hand side of the picture shows the name of Morey, but that is a mistake by the draughtsman as will be explained in the post on Morey. In the 1861 census, the vaults are no longer mentioned separately, nor is there any mention of a manager for them. The Morrises are assisted by an assistant, a waiter, a cook, a chambermaid, a porter, two barmen and a housemaid. Marcus died 10 October 1862 and his probate record gives his mother as his only next of kin.(6) Grace probably stopped running the tavern shortly after Marcus’s death as the Post Office Directory of 1869 lists a Henry Clifford Green as the proprietor. 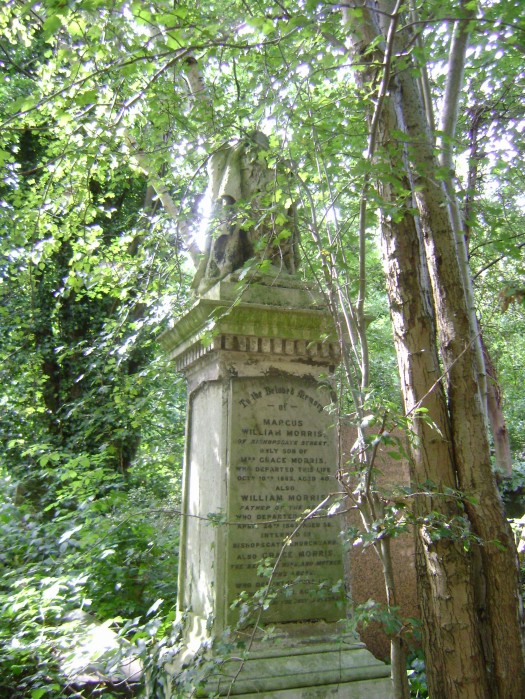 monument for the family in Abney Park

The pub still exists [or it did when I wrote this post, see here for developments (Dec. 2014)], albeit with the address now numbered 121 Bishopsgate, but you can certainly still recognise the Morris building. 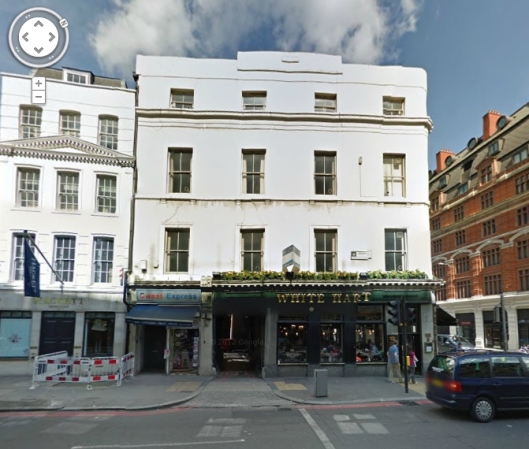 1 thought on “The White Hart”